Giveaway: This Is What Happy Looks Like by Jennifer E. Smith

I'm currently reading one of my most anticipated titles of 2013 thanks to Sam and Headline! And it is good. Like REALLY GOOD! This Is What Happy Looks Like by Jen E. Smith is exactly what I needed to find my way back into reading (it's been going slow after the exam period. My brain went into shutdown).
You can tell by its title, that Jennifer's newest book is about happiness. The many things that can make us happy. And it also reminded me to do that more often. Remind myself of the things that make ME happy and appreciate them every single day. Smile about things that brighten each day instead of thinking about the things that anger or stress me.

So I decided to do a little countdown towards the UK publication of This Is What Happy Looks Like. From March 1st I'm going to tweet one picture of something that makes me happy. Every day. Until the pub date on April 4th. I'll be tweeting with the hashtag #HappyLooksLike. It'd be fun to share them with others and also see what makes YOU happy.

That's where you can enter the giveaway. No rafflecopter widget you ask? This giveaway is of a different kind and you need a twitter account to participate.
I'll be giving away a copy of Jen's new book on April 5th! What do you have to do to win? Join my fun little game of posting a pic of something that makes you happy. Food. Books. People you love. Travelling. Anything.
You can tweet once per day, for every day from March 1st to April 4th. Include the link to your picture and the hashtags #HappyLooksLike & #MissPageTurner to be entered. Nothing more. If you agree, I will post some of your pictures on my blog when the giveaway is over.

The giveaway is open internationally. 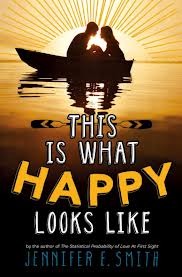 If fate sent you an email, would you answer?

In This is What Happy Looks Like, Jennifer E. Smith's new YA novel, perfect strangers Graham Larkin and Ellie O'Neill meet—albeit virtually—when Graham accidentally sends Ellie an email about his pet pig, Wilbur. In the tradition of romantic movies like "You've Got Mail" and "Sleepless in Seattle," the two 17-year-olds strike up an email relationship, even though they live on opposite sides of the country and don't even know each other's first names.

Through a series of funny and poignant messages, Graham and Ellie make a true connection, sharing intimate details about their lives, hopes and fears. But they don't tell each other everything; Graham doesn't know the major secret hidden in Ellie's family tree, and Ellie is innocently unaware that Graham is actually a world-famous teen actor living in Los Angeles.

When the location for the shoot of Graham's new film falls through, he sees an opportunity to take their relationship from online to in-person, managing to get the production relocated to picturesque Henley, Maine, where Ellie lives. But can a star as famous as Graham have a real relationship with an ordinary girl like Ellie? And why does Ellie's mom want her to avoid the media's spotlight at all costs?
Summary by Goodreads


This Is What Happy Looks Like will be published April 4th by Headline.

Email ThisBlogThis!Share to TwitterShare to FacebookShare to Pinterest
Labels: Giveaway, Jennifer E. Smith, This Is What Happy Looks Like


A SACRED OATH
A FALLEN ANGEL
A FORBIDDEN LOVE

Romance was not part of Nora Grey's the plan. She's never been particularly attracted to the boys at her school, no matter how hard her best friend, Vee, pushes them at her. Not until Patch comes along. With his easy smile and eyes that seem to see inside her, Patch draws Nora to him against her better judgment.

But after a series of terrifying encounters, Nora's not sure whom to trust. Patch seems to be everywhere she is and seems to know more about her than her closest friends. She can't decide whether she should fall into his arms or run and hide. And when she tries to seek some answers, she finds herself near a truth that is way more unsettling than anything Patch makes her feel.

For she is right in the middle of an ancient battle between the immortal and those that have fallen - and, when it comes to choosing sides, the wrong choice will cost Nora her life.

This review contains light spoilers for people who haven't read past CRESCENDO!


The events of HUSH, HUSH have been set into motion decades ago, when an unfortunate man is being forced to swear fealty to a fallen angel. A war between fallen angels and Nephilim, the children of angels and humans, breaks out and enormous sacrifices are demanded of everyone involved.

Meet Nora Grey, who  is drawn into the conflict against her will and, to additionally complicate things, feels attracted to fallen angel Patch.
Nora is a naturally kind girl. Patch is the total opposite of Nora. He is a real bad boy, playing games all the time. His character confused me and never appeared as likeable as Nora sees him or wants him to be.
To be honest, Patch in his all-black uniform, never achieved to put a spell on me. Many fell for his bad-ass attitude and craved his tough, sometimes almost aggressive demeanor. He never became a well-rounded character to me that I could’ve said, I knew the true essence of.
Although it says opposites attract, I simply didn’t see the necessity for Nora and Patch to be together. But I suggest you’d better decide for yourselves if Patch matches your version of an admirable book boyfriend.

Besides the war and her relationship with Patch, Nora miraculously still has some time to spare to meet up with her best friend Vee. Or later into the story with Scott, who poses as alternative love interest in CRESCENDO. Good choice to let their attraction to each other recede, so that we didn't have to worry about a possible love triangle for long. Jealousy is still a dominant part of all books in the series with potential to easily displease readers. The secondary characters felt almost more important to me than the actual protagonists, they are diverting and especially Scott was one character I loved.

The HUSH, HUSH books can’t be sold as your typical angel series. There is no heavenly mission to rid the world of evil. The angels we meet are definitely no heroes. They all felt shady and it appeared they weren’t 100 % honest with their allies. These dark and vengeful versions of angels are quite zestful indeed. Even Nora developed an unhealthy pattern of deceit in the last book that tended to annoy me.
Overlooking the entire series’ course of action, I can’t seem to see a major progress from the first book to FINALE. HUSH, HUSH was a good start into the series, with so much happening in the first book and the appeal of a brand new story. CRESCENDO was the worst out of all of them, because Nora kept on constantly putting herself in dangerous situations and fought with Patch about the most enervating issues. A definite turn-off!

Next up, SILENCE posed as the part of Nora’s story which I enjoyed most. Due to her abduction, Nora has lost her entire memories concerning her boyfriend Patch and everything about fallen angels and Nephilim. I liked to see Nora rebel against her blockade and act out at everyone who would try to hold her down. The third book marked the part of the series in which things finally got interesting.
Fallen angels, arch angels and Nephilim have been hating each other for years. Their conflict has been simmering in the first three books, only waiting to fully break out towards the finale. But the ending we are waiting for, never actually results in an epic battle scene. Instead it comes short in detail and misses out on drawn-out one on one fights. The ending in general came too suddenly and didn’t serve all the information about the characters’ futures I was hoping for.

3/5 *** HUSH, HUSH series- No need to keep this novel quiet, tell all angel novel fans about it!

Recently I've been feeling highly attracted to YA books with their ­focus on heavenly missons and angelic beings. The HUSH, HUSH series couldn’t score a place on my top list and I wouldn’t exactly recommend it as a first choice read to anyone who hasn't read an angel-related book before. Nevertheless Becca Fitzpatrick has shown her qualitative writing skills with varied sentence structures and easy-flowing dialogues. I am very looking forward to find out more about her next book!

* What comes after the HUSH, HUSH series? Simon & Schuster will be publishing Becca's standalone novel, BLACK ICE, in 2014!

* Read an excerpt of HUSH, HUSH!
* Book trailers!
* For movie news, click here.
* Click here to listen to the HUSH, HUSH playlists.
* For further information aber Becca Fitzpatrick and her books, visit www.beccafitzpatrick.com
* Thanks to Simon & Schuster UK for sending me a copy of Silence & Finale for review!