5/5 ***** Zusak is the magician behind a beautifully written The Book Thief, a novel set during World War II, about a single girl and the philosophy of death. A must read, even for people not interested in history! 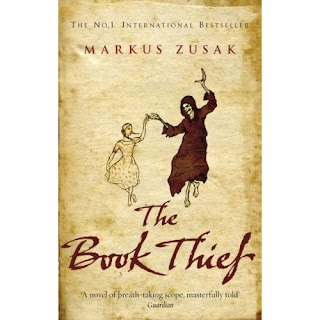 ~ The Author ~
Markus Zusak (born in 1975 in Sydney) is an Australian author. He is the son of an Austrian father and German mother and he is the youngest of four children.

Zusak is best known for his novels I Am The Messenger and The Book Thief. These have been very successful both in Australia and internationally, and have sold more copies and received more publicity and critical acclaim than his other novels.

Zusak lives in Sydney, with his wife and daughter and has taken up surfing.
Author profile by Goodreads
~ The Novel ~
What was Zusak’s inspiration for writing The Book Thief? His answer:
The Book Thief was supposed to be a small book - only a hundred pages or so. When I was growing up, I heard stories at home about Munich and Vienna in war-time, when my parents were children. Two stories my mother told me affected me a lot. The first was about Munich being bombed, and how the sky was on fire, how everything was red. The second was about something else she saw...
One day, there was a terrible noise coming from the main street of town, and when she ran to see it, she saw that Jewish people were being marched to Dachau, the concentration camp. At the back of the line, there was an old man, totally emaciated, who couldn't keep up. When a teenage boy saw this, he ran inside and brought the man a piece of bread. The man fell to his knees and kissed the boy's ankles and thanked him . . . Soon, a soldier noticed and walked over. He tore the bread from the man's hands and whipped him for taking it. Then he chased the boy and whipped him for giving him the bread in the first place. In one moment, there was great kindness and great cruelty, and I saw it as the perfect story of how humans are.
When I remembered those stories, I wanted to build them into a small book, like I said. The result was The Book Thief, and it came to mean much more to me than I could have imagined. No matter what anyone ever says about that book, whether good or bad, I know it was the best I could do, and I don't think a writer can ask for more of himself than that.
Read more about Zusak and The Book Thief in the Q&A with Random House here!
~ The Story ~
It’s just a small story really, about among other things: a girl, some words, an accordionist, some fanatical Germans, a Jewish fist-fighter, and quite a lot of thievery. . . .

Narrated by Death, Markus Zusak's groundbreaking new novel is the story of Liesel Meminger, a young foster girl living outside of Munich in Nazi Germany. Liesel scratches out a meager existence for herself by stealing when she discovers something she can't resist- books. Soon she is stealing books from Nazi book-burnings, the mayor's wife's library, wherever they are to be found.
With the help of her accordion-playing foster father, Liesel learns to read and shares her stolen books with her neighbors during bombing raids, as well as with the Jewish man hidden in her basement.
Summary by Goodreads
~ The Review ~
I admit it, The Book Thief and I had a more than slow start. The first one-hundred pages I felt all feelings between anger, confusion and boredom. At that point I was determined to give it one out of five stars when I would ever make it through this novel. I even thought about quitting reading. Now, let me turn this one start into five full stars!
I think I just wasn’t used to the extraordinarily different writing style of Zusak.
The Book Thief was my book for train rides, and with its almost six hundred pages endured one whole semester. I laughed, I cried (a lot, so I am glad that I read the last chapters at home), sometimes I smiled like crazy.
This novel is narrated by death, literally. A narrator I never came across before, but the best for the job of telling the book thief’s story there can be. He is sensitive and human and sometimes almost annoying when “destroying” a later death scene by announcing it several hundred pages before it happens. Sometimes he is silently thinking, other times more talkative, so that my eyes often got teary even when I was pages away from the next victim of war. We get to know a death that sees the world and its transience with a spectrum of colours and magic. I’m in love with Zusak's philosophy and poetry of death.
The Book Thief is divided into ten parts, each one stands for a significant book that was part of Liesel’s life.
Despite the extremely sad and moving happenings and the story, I often couldn’t suppress a grin that Zusak conjured with so much charm and wit. I found scenes, moments that radiated with warmth and happiness, although the burden of the events of war never fully left my reading consciousness.
Furthermore Zusak provides characters that couldn’t be more diverse. Liesel, the book thief and the girl who gives this novel its name, is a touch, young girl with a personality that lets even death linger for a tiny moment to watch her next movement. Rudy is a young man that never lets corruption and power win him over, sticks to his morals and is always there for his best friend Liesel.
Characters like Liesel’s foster parents, the jew Max and various neighbours enrich the story, in the end I cared for every single one of them.
Zusak certainly doesn’t claim to provide a complete account of historical occurrences and display all National Socialist events. The Book Thief is a well founded and authentic novel with several true events and important dates, persons mentioned.
The applied language is in the true sense of a word terribly beautiful. Frequently I felt a huge admiration for the expression of such an innocent poetry in such a horrible time. In addition many sketches and lovely fables soften the events.
Not only books are stolen, but the heart of each single reader. Liesel Meminger, death and Markus Zusak took my heart after an initial light breeze by storm.
~ We love this book because… ~
1) of its numerous colours describing a pitch black time
2) of “The Word Shaker”
3) of lemon yellow hair
4) of the ten stolen books that give a girl and The Book Thief a personality
5) everyone of us wants to be called a “Saumensch” (“pig”)
~ The Verdict ~
You don’t need to be a history professor to read and love The Book Thief. Zusak invites his readers to take part in the story of Liesel Meminger and her friends and learn new perspectives of life and death. The Book Thief is a standalone novel with the character of a whole library of colourful books.
Posted by Miss Page-Turner at 12:31:00 PM