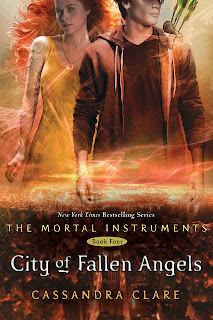 City of Fallen Angels takes place two months after the events of City of Glass. In it, a mysterious someone’s killing the Shadowhunters who used to be in Valentine’s Circle and displaying their bodies around New York City in a manner designed to provoke hostility between Downworlders and Shadowhunters, leaving tensions running high in the city and disrupting Clary’s plan to lead as normal a life as she can — training to be a Shadowhunter, and pursuing her relationship with Jace. As Jace and Clary delve into the issue of the murdered Shadowhunters, they discover a mystery that has deeply personal consequences for them — consequences that may strengthen their relationship, or rip it apart forever.

Meanwhile, internecine warfare among vampires is tearing the Downworld community apart, and only Simon — the Daylighter who everyone wants on their side — can decide the outcome; too bad he wants nothing to do with Downworld politics. Love, blood, betrayal and revenge: the stakes are higher than ever in City of Fallen Angels.

I was concerned that the TMI magic might be gone. And I admit that I had a slightly slow start with CITY OF FALLEN ANGELS, but I guess that is because I had to somehow accept or adjust to the main focus on Simon's part of the story.


Cassandra Clare's writing and language are as fantastic as always. Throughout the whole novel Clare applies wise references, supports the novel's character with biblical references, poems and ancient motifs. The plot is structured by parallel strings of action to keep the reader's attention and design an interesting and thrilling story.

What makes the THE MORTAL INSTRUMENTS series such an interesting read is that we get the chance to read a story told from the different perspectives of our favourite main characters in form of third person narrators, like Simon, Clary, Jace, Magnus or Luke.

No other novel has as many characters that I truly care about. In their very different ways they all have something special and it is a pleasure to watch them interact. I missed them so much that I am more than happy about this new book cycle around the Shadowhunters and their old and new friends.

Some characters are and behave different from the persons they were in the first THE MORTAL INSTRUMENTS cycle. I miss their former energy, but totally accept that new incidents have an impact on the character cast and show new aspects of their personalities. I could start criticizing CITY OF FALLEN ANGELS for not featuring exactly the same characters in the same state, with the same attitude as in CITY OF GLASS, but it is exactly that changes in personality due to grave incidents that make CITY OF FALLEN ANGELS such a believable and different- but authentic and worthy sequel to CITY OF GLASS.

CITY OF FALLEN ANGELS also stands for a successful interplay between two different series. THE MORTAL INTSTRUMENTS series is visited or still inhabited by characters that we started caring about in THE INFERNAL DEVICES series, the prequel to THE MORTAL INSTRUMENTS.

With the third and original final part of THE MORTAL INSTRUMENTS, CITY OF GLASS, the incest taboo that stood between Clary and Jace's relationship came to a natural solution. It was exactly this taboo that put a painful thrill on the three previous novels. But the solution doesn't stop Cassandra Clare from finding other ways to torture her characters and readers.

The end... just wow...like expected it tore at my heart! These sarcastic and romantic delights have violent and torturing ends! No wonder Clare is my favourite author, she knows how to turn your insides upside down! In some way it felt like the first book in a series and at the same time so familiar, needed and good!

CITY OF FALLEN ANGELS is not as good as the previous three novels in THE MORTAL INSTRUMENTS series.Still I already miss my favourite characters again and I’m full of positive anticipation. The best about CITY OF FALLEN ANGELS? It's got two sequels in tow which leave me insanely longing. And these next three books in the TMI series deserve their add as second cycle, they promise to be epic!

1) we really appreciate the DSAS
2) we like our portion of sarcasm hot
3) it's just the start of an epic second THE MORTAL INSTRUMENTS cycle
4) of its high definition writing quality
5) of its masterly interplay with its prequel series, THE INFERNAL DEVICES

5/5 ***** CITY OF FALLEN ANGELS felt so familiar and yet new and exciting. We love our good portion of sarcasm hot and our novels otherworldly with that special tingly-drugged up feeling that only a Cassandra Clare novel is able to summon.


An absolutely infernal start of the second THE MORTAL INSTRUMENTS cycle. The war of Shadowhunters against demons wandering on earth and lurching in the farthest corner of your heart continues. If you were enchanted by CITY OF BONES, trained to endure frustration and shock in CITY OF ASHES and learned to in the end trust in the humanity of a truly wicked author-genius- you should forget that when starting CITY OF FALLEN ANGELS.

* You can read the first chapter of CITY OF FALLEN ANGELS here!

* Want to meet Cassandra Clare? You can check out the tour dates here.

* Make sure to visit www.cassandraclare.com
Posted by Miss Page-Turner at 2:06:00 PM