Book Review: You Don't Have to Say You Love Me by Sarra Manning 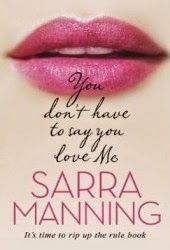 Sweet, bookish Neve Slater always plays by the rules. And the number one rule is that good-natured fat girls like her don't get guys like gorgeous, handsome William, heir to Neve's heart since university. But William's been in LA for three years, and Neve's been slimming down and re-inventing herself so that when he returns, he'll fall head over heels in love with the new, improved her.

So she's not that interested in other men. Until her sister Celia points out that if Neve wants William to think she's an experienced love-goddess and not the fumbling, awkward girl he left behind, then she'd better get some, well, experience.

What Neve needs is someone to show her the ropes, someone like Celia's colleague Max. Wicked, shallow, sexy Max. And since he's such a man-slut, and so not Neve's type, she certainly won't fall for him. Because William is the man for her... right?

Somewhere between losing weight and losing her inhibitions, Neve's lost her heart - but to whom?

YOU DON'T HAVE TO SAY YOU LOVE ME is my favourite Sarra Manning book so far out of all her YA and adult books. Even if Sarra's books don't sound like a perfect match for you, she makes them fit. I learned to give every book of hers a chance because in the end I could hardly say I disliked one word of her writing.

Neve is like this very real girl who could live in the flat above you or the nice girl who helps you pick up the stuff you accidentally dropped in the grocery store. She was so relatable it was no surprise I felt a strong kinship for her. She was unlike any other fictional chick lit girl I had met so far and I wanted her to be real so badly and be friends with her. Perhaps reading her story felt so emotional and real because she is dealing with a major issue so many women deal with today, losing weight and honestly evaluating your body image.

Max was the perfect male counterpart for Neve! Everyone keeps describing him a man slut. But we are granted the pleasure to know him a totally different way from the moment we meet him. He might be a tease, but he's honest and gentle and cuddly, and such a sexy sexpert. Neve wants to have Max in her life because he is so much more experienced than she is and she hopes he can kind of train her for her one true love, William. I can't imagine anyone being Team William after meeting Max first. William sends letters Neve's way, but any scene with Neve thinking about him or talking to him kind of lost me for the time it lasted. No wonder, because they didn't have Max in them, too. You can see he's my absolute favourite out of all the chick lit book boys.

The sex scenes that were a major part of Neve and Max's relationship long before feelings came into play, were some of the best I've read so far. I love how Sarra Manning took Neve on this adventurous experience of first real love and showed her how being loved, physically and emotionally could feel like, if you just found the right person. Every time Max and Neve got together my heart kept growing. Grab a copy of YOU DON'T HAVE TO SAY YOU LOVE ME and see for yourself how amazing their chemistry and love story is.

YOU DON'T HAVE TO SAY YOU LOVE ME was my highlight in the end of 2013. Who would've thought I'd rush through this 555 page book in no time and fall in love with the characters so much that I still think about them when I finished the story months ago. When I muse what Neve and Max would be up to right now a cheeky smirk of the Max kind steals over my face.

"'Not really much point in going to bed, is there?' Max shifted in his seat so his arm and leg were pressed against Neve's. 'I'm sure we could find something else to do to pass the time.' He said it lightly and with that cheeky little smirk so Neve decided not to take offence. She smiled instead, secure in the knowledge that there was every point in going to bed, alone, to sleep for a solid five hours."― p.29

YOU DON'T HAVE TO SAY YOU LOVE ME you might enjoy UNSTICKY by Sarra Manning, THE LONGEST HOLIDAY by Paige Toon and HERE'S LOOKING AT YOU by Mhairi McFarlane. Three chick lit stories that are whatever you need them to be. Smart, sexy & sweet.

* Have you read IT FELT LIKE A KISS yet?

* Click here to read an excerpt of YOU DON'T HAVE TO SAY YOU LOVE ME.

* For more information about Sarra and her books visit www.sarramanning.co.uk.

Email ThisBlogThis!Share to TwitterShare to FacebookShare to Pinterest
Labels: 5-star rating, Book Review, Corgi, Sarra Manning, You Don't Have to Say You Love Me