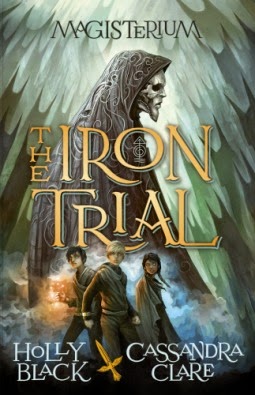 Most kids would do anything to pass the Iron Trial.

Not Callum Hunt. He wants to fail.

All his life, Call has been warned by his father to stay away from magic. If he succeeds at the Iron Trial and is admitted into the Magisterium, he is sure it can only mean bad things for him.

So he tries his best to do his worst – and fails at failing.

Now the Magisterium awaits him. It’s a place that’s both sensational and sinister, with dark ties to his past and a twisty path to his future.

The Iron Trial is just the beginning, for the biggest test is still to come . . .

Callum, our protagonist, is such a kind and lovely boy. He is also a lonely boy. That is, until his life changes radically when he is accepted into the Magisterium, the one place on earth he's always wanted to avoid at all costs.
He has a disability and has been an outsider all his life. So even if he didn't want to attend the new school, this opportunity means a new start for him. It's his chance to make new friends and prove the world that he can be good at something, maybe even the best.
The character of Callum is a character who represents all the kids who are struggeling with a disability themselves. He shows that many things are possible when you believe in yourself. Call will encourage many readers to be as brave as he is.

Together with his new friends Aaron and Tamara, Call introduces readers to a new generation of magic apprentices at the Magisterium. THE IRON TRIAL kind of reminded me of the Harry Potter world. Yet Cassandra Clare and Holly Black's book has so many bewitching peculiarities that are solely Magisterium-made that you can't but think of it as its own magical world. I'm sure many readers will enjoy this new and different brand of magic.

The three kids are only getting to know the Magisterium and its rules. As part of their apprenticeship Callum and his friends are presented with little tasks and small missions to develop their magic skills.  They are mostly harmless missions, so the story comes along less adventurous than expected. It is a very innocent kind of magic the kids are practicing. And they are learning to control the elements with the help of their mentors.
Despite the big author bonus and the friendship story that works great I am not fully content with the rather slow pace of the story. The introductory part was longer than necessary and it was a while until I felt at home in the Magisterium.

This Middle Grade read is suitable for younger readers. The friendship part of the story is very important. Cassandra and Holly go into detail how such a strong bond of friendship between Callum, Tamara and Aaron develops over time and how trials are mastered together. I really like this wizard trio!

3,5/5 ***/* THE IRON TRIAL - Readers all over the world will fall in love with Callum's story of bravery, magic and friendship!

Two beloved authors of mine teamed up to write a new magic school series, and now that I know there will be five books in this series I am an even happier reader. Clare and Black's writing is rich in detail and very strong in creating lovely atmospheric background settings to every chapter. I would recommend THE IRON TRIAL to younger readers but older fans of magic schools will definitely get their money's worth, too.

"As he bent closer, he realized they were words - words his wife had carved into the cave ice with the last of her dying strength.
As he read them, he felt them like three hard blows to the stomach.
KILL THE CHILD" ― p.4-5

THE IRON TRIAL you might enjoy HEX HALL by Rachel Hawkins, THE SCHOOL FOR GOOD AND EVIL by Soman Chainani and THE LIGHTNING THIEF by Rick Riordan. These are YA and MG reads with a good portion of magic.

* Check out the German cover for THE IRON TRIAL.

* THE COPPER GAUNTLET, the second book in this series comes out 2015.

* Click here to watch the THE IRON TRIAL book trailer.

* Here's an excerpt of THE IRON TRIAL for you to read.

* For more information about the authors and their books visit www.blackholly.com and www.cassandraclare.com.

* Thanks to Random House UK for sending me a proof copy of THE IRON TRIAL for review!