Book Review: It Had to Be You by Ellie Adams 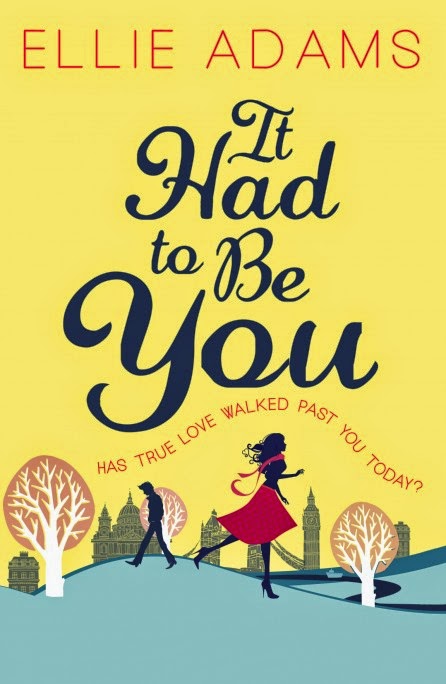 Lizzy Spellman has been dumped. On her birthday. In front of all her friends. By the man she thought was the one. Someone even filmed it, so now she's a YouTube hit too.

. . . Could be the best thing that has ever happened to her

When she thinks things can't get any worse, she meets the rudest and most cynical man in the world, and finds a new reason for living. To prove him wrong.

Lizzy Spellman is one of the funniest chick lit girls I've had the pleasure to accompany on her disastrous journey to happiness. We clicked on the first page when Lizzy is in this aweful costume and is called on stage to sing karaoke in front of a horde of wedding guests and get dumped by her boyfriend. And then a YouTube video of the whole scene goes viral. What a terribly awkward start to the story! Of course I was instantly hooked and couldn't wait to find out what else Ellie Adams had planned for her heroine.

Lizzy and Elliot are not your typical adorable chick lit couple. He's a grump. She is disappointed in men after being dumped in front of a huge crowd. The two are pretty different characters. Elliot is always disapproving and hesitant at letting people into his life, whereas Lizzy is bubbly and outgoing. You think Lizzy can break his shell?

IT HAD TO BE YOU is like a quick-witted and  modern retelling of Pride and Prejudice. He seems so rude and unapproachable at first and Lizzy is instantly convinced that he's stuck up. Still, between misunderstandings and confusions a solid and beautiful friendship develops between the two. Their friendship makes up a good part of the story until they finally get a chance to test their romantic feelings for each other. Which was a welcome change to the love stories that feel too intense too fast. I could really use a sequel to the story so that I can find out what happens next in Lizzy and Elliot's love story.
Friendship in general is a brilliant aspect of this book. Poppet and Nic are Lizzy's best friends. And they are such fun friends who made the story a much more enjoyable read. As much as you want a happy ending for Lizzy, you want it for her friends, too.

Like many others of my favourite chick lit books IT HAD TO BE YOU is set in London. This very urban and colorful setting holds so many possiblities. One of them is Lizzy working in PR. And the PR work was hilarious. Usually, I'm not very into reading so much about what characters are doing at work every day, but Lizzy's job experiences really gave the book an uplifting and warm spirit. Lizzy's work scenes were probably my favourite part of her story. I couldn't count how often I texted a friend to share the hilarious jokes. They are too good not to be shared!


Lizzy Spellman is a character you want to meet. She's funny. She's lively. And I could relate to her really well. Lizzy's awkward and hilarious situations, and secondary characters with actual,  outstanding personalities make IT HAD TO BE YOU an especially memorable read.  I read  Ellie Adams' new book in one sitting while on vacation.

"On the night of the 30th Birthday Party of Doom, Lizzy Spellman learnt three things.
Number one: Camera phones are the worst invention in the history of womankind.
Number two: She was never going to get another boyfriend again. After drinking herself to death on Kumala white whine, her body would lie undiscovered for weeks until the semi-hot postman with the Three Lions tattoo on his calf noticed the bad smell, or someone realized that she hadn't been on Facebook for a while.
Number three: It's bloody murder going for a wee in a Henry VIII costume." ― p.7

IT HAD TO BE YOU you might enjoy YOU HAD ME AT HELLO by Mhairi McFarlane, IT FELT LIKE A KISS by Sarra Manning and CHASING DAISY by Paige Toon. Three stories about girls finding Mr. Right even if they havn't been looking for him in the first place.

* Click here to read  an excerpt of IT HAD TO BE YOU.

* Want to read an interview with Jo Carnegie? You can find it here.

* For more information about Ellie Adams and her books visit www.churchminster.co.uk.

* Thanks to Corgi for sending me a proof copy of IT HAD TO BE YOU for review!
Posted by Miss Page-Turner at 5:54:00 PM

Email ThisBlogThis!Share to TwitterShare to FacebookShare to Pinterest
Labels: 4.5-star rating, Book Review, Corgi, It Had to Be You, Jo Carnegie