Blog Tour: The Summer After You and Me by Jennifer Salvato Doktorski - Deleted Scene

Welcome to the Jersey Shore! A very fabulous summer lies ahead of you. And if you want to make it perfect you just have to grab a copy of Jennifer Salvato Doktorski's newest book! As part of the Sourcebooks Fire blog tour I'm sharing a deleted scene from the original draft of THE SUMMER AFTER YOU AND ME today. Enjoy! 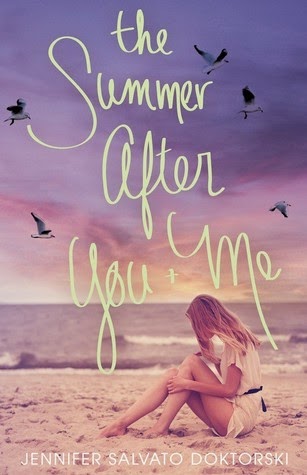 Will it be a summer of fresh starts or second chances?

For Lucy, the Jersey Shore isn’t just the perfect summer escape, it’s home. As a local girl, she knows not to get attached to the tourists. They breeze in during Memorial Day weekend, crowding her costal town and stealing moonlit kisses, only to pack up their beach umbrellas and empty promises on Labor Day. Still, she can’t help but crush on charming Connor Malloy. His family spends every summer next door, and she longs for their friendship to turn into something deeper.

Then Superstorm Sandy sweeps up the coast, bringing Lucy and Connor together for a few intense hours. Except nothing is the same in the wake of the storm, and Lucy is left to pick up the pieces of her broken heart and her broken home. Time may heal all wounds, but with Memorial Day approaching and Connor returning, Lucy’s summer is sure to be filled with fireworks.


Jennifer Salvato Doktorski is the author of two YA novels and is a freelance nonfiction writer. Her first paid writing gig was at The North Jersey Herald & News, where she wrote obituaries and began her lifelong love of news and coffee. She lives in New Jersey with her family.

The Sumer After You and Me - Deleted Scene

Jennifer Salvato Doktorski: "A few scenes from THE SUMMER AFTER YOU AND ME didn’t make the cut. This is one of them. In the original draft, Connor convinces Lucy that she and Andrew should go on a double-date with him and his girlfriend, Bryn. The two couples drive together to a party “OTB” (Over the bridge) in Toms River, which is the town across the Barnegat Bay from Seaside Park. In this scene, Connor, Bryn, Lucy, and Andrew are returning home from the party in Connor’s father’s car. They’ve just pulled into the driveway that separate’s Connor’s house from Lucy’s."

“Who’s that?” Bryn asks as the car rolls past Liam toward the detached garage in back of the Malloy house. It’s funny how their garage survived the storm but our guest cottage didn’t. The devastation caused by the storm is disturbing on so many levels, but the randomness compounds everyone’s frustrations and feelings of futility.
“My brother,” I say.
“Really? You look nothing alike.”
We’ve heard that one all our lives. If you ask me, he got the better deal in the DNA shuffle. Mom’s blue eyes, Dad’s jet black hair, skin that turns mocha brown. It trumps brown eyes, dirty blond hair that needs heavy doses of sunlight to turn golden, and skin that requires SPF of fifty or above.
“They’re twins,” Andrew says as he opens his car door.
“Really?!” Color Bryn shocked. “I guess they’re not identical,” she says.
Should I bother to tell her boy/girl twins are never identical? It’s another thing that gets so old.
“Boys and girls can’t be identical twins.” Connor sounds annoyed as he opens his door. “They’re always fraternal.”
“That’s what I said.” Bryn says once she’s out of the car. “They look nothing alike.”
I roll my eyes at Andrew and slide across the seat to get out on his side of the car. For some reason, I don’t want to end up standing next to Bryn.
Connor puts out a hand to shake Andrew’s. “Thanks for coming man,” he says.
“Thanks for the ride,” Andrew says. “We should do it again. I may be working at Rafferty’s this summer. You should come hang out.”
No, no, no! There will be no hanging out with Connor and Bryn. It’s already too weird, confusing, unnecessary and… what else? There’s got to be more. Bryn joins us on our side of the car puts her arm around Connor’s waist and snuggles against him. Oh, yeah. Depressing.
“Well, good night!” I say, desperate to wrap things up and walk over to my yard. “Have a safe trip back and enjoy the prom.”
“When’s your prom?” Andrew asks. “Ours is June fourteenth.”
“Bryn’s is the night before,” Connor says.
“A Thursday?”
“Friday is senior cut day,” Bryn explains. “Everyone goes away for a long weekend after prom.”
That’s right. Connor mentioned they’d be here for prom weekend. Maybe Andrew and I should go away. Yeah, right. My parents aren’t letting me go anywhere overnight with a boy. Even if that boy is Andrew.
“Well, see ya,” I say. Making a second attempt to end this night.
“Later,” Andrew says.
When we’re finally in my yard, Andrew walks me with onto the back porch and kisses me goodnight at the kitchen door.
“Coming to the annual Clark Memorial Day par-tay tomorrow?” Andrew asks.
“Please tell me you don’t use the phrase par-tay around anyone but me.”
Andrew pretends to get all serious. “I’m sorry I can’t do that. So are you coming or what?”
“Of course. Right after work. I wouldn’t miss it.”
My parents and Liam usually go too. The Clarks throw quite a bash. I’ve always envied Andrew’s parents fun-loving ways. They seem happiest when they have a house and yard full of people. My parents don’t exactly go out of their way to entertain.
“See you tomorrow,” I say before I close the door.
“Text me when you’re leaving work.”
“I will.”
Yay for work! I’m thrilled that I won’t be around at all tomorrow. Won’t have to see Connor and Bryn getting into his pick-up together and driving off toward the Garden State Parkway.
I lock the backdoor then surreptitiously peek out front to see if Liam’s still on the porch. He isn’t. I lock the front door since Liam didn’t of course. At the landing on the top of the steps, I pause and listen for signs of movement in Liam’s room. Hearing the familiar discordant thrum! I know he just plunked down his acoustic in its stand. Good. He’s in there. Locking my brother out would be bad.
As quickly and quietly as possible, I scamper up to my room. Avoiding Liam feels wrong. So did double-dating with Connor. I wasn’t exactly honest with Andrew about how that came about. So yeah, I get why Liam’s annoyed with me, but I haven’t really forgiven him for sabotaging and severing my connection to Connor back in the fall. My brother has no right to be angry with me, not when he was the one who caused the unsettling turn my love life has taken.
My eyes cut to my bedroom window. Before turning on the light, I cross the room to pull down the shade. Outside Connor is alone in his driveway. He’s leaning against the trunk of his father’s car, looking down at his phone. I watch the top of his head for a few seconds, wondering if he’s going to look up. My vantage point, both the height and the angle, remind me of that day in October. I paused at the top of the grand staircase when I saw Connor near the entranceway studying a framed seascape in muted pastels. I held my breath. Wondering if he’d meant everything he’d just said and trying to picture waking up every morning and finding him there. He must have felt me staring. For once, I wasn’t being sneaky about it and the expression on his face when our eyes locked told me I didn’t have to be, not anymore.
I felt like we covered so much ground that day; that we became an “us”. Look at me now, I think as I stand hidden in the shadows of my room, back where I started. I guess it’s where I belong. I wait one second more for Connor to look up. When he doesn’t, I pull the shade down and go to bed.

Email ThisBlogThis!Share to TwitterShare to FacebookShare to Pinterest
Labels: Blog Tour, Jennifer Salvato Doktorski, Sourcebooks Fire, The Summer After You and Me