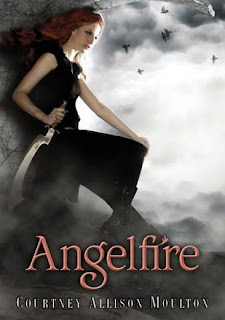 ~ The Author ~
Courtney Allison Moulton lives in Michigan, where she is a photographer and spends all her free time riding and showing horses. She has always loved reading about ancient mythologies, dead languages, and telling scary, romantic stories. ANGELFIRE is her debut novel.
Author profile by Goodreads
For further information visit http://www.courtneyallisonmoulton.com/
~ The Novel ~
Angelfire is the first novel in a trilogy, published February 15th 2011. Its two sequels Wings of the Wicked and Hymn to the Fallen will be published by HaperCollins / Katherine Tegen Books in 2012 and 2013.

~ The Story ~
When seventeen-year-old Ellie starts seeing reapers - monstrous creatures who devour humans and send their souls to Hell - she finds herself on the front lines of a supernatural war between archangels and the Fallen and faced with the possible destruction of her soul.

A mysterious boy named Will reveals she is the reincarnation of an ancient warrior, the only one capable of wielding swords of angelfire to fight the reapers, and he is an immortal sworn to protect her in battle. Now that Ellie's powers have been awakened, a powerful reaper called Bastian has come forward to challenge her. He has employed a fierce assassin to eliminate her - an assassin who has already killed her once.

While balancing her dwindling social life and reaper-hunting duties, she and Will discover Bastian is searching for a dormant creature believed to be a true soul reaper. Bastian plans to use this weapon to ignite the End of Days and to destroy Ellie's soul, ending her rebirth cycle forever. Now, she must face an army of Bastian's most frightening reapers, prevent the soul reaper from consuming her soul, and uncover the secrets of her past lives - including truths that may be too frightening to remember.
Summary by Goodreads
~ The Review ~
First I didn’t want to read Angelfire, because I read the summary and somehow confused the word “reaper” with “rapist”. I was shocked and wondered how such a character background could be appropriate for a YA novel. Big announcement: Angelfire is NOT about a rapist, but a special type of ancient warrior called reaper, ha and I know I must be the only one to confuse this.
Beside numerous positive critiques on blogs, a small teaser scene on Moulton’s blog totally drew my attention on Angelfire. It was a fast fighting scene between both protagonists, Will and Ellie, that promised action, but also a slight romance, sexy scenes and witty exchanges of words.
Ellie is a reaper who has the power  of reincarnation. Ellie’s character has many potential left cause she has a past of more than thousand years that need to be or can be discovered.
What is so refreshing about her is that her ancient reaper self, who likes to fight, needs to be reconciled with her human teenager self, who likes her friends, family, dancing, partying.
Moulton also lays a certain accentuation on the relationships between Ellie and her parents. Angelfire does not only feature one grand conflict between heaven and hell, but also daily quarrels and conflicts every teenager can relate to, issues of drinking, partying and school problems are mentioned.
Already having weird nightmares, Ellie’s life turns upside down with Will entering her life. Only talking about him makes me wobbly. Will is my new superhero! He is a warrior, an immortal reaper and brooding, dark, sexy. He remains mysterious over a large sequence of Angelfire and just like Ellie I couldn't wait to discover and get to know him.
In the end I felt like Ellie who has known him for centuries and just remembered piece by piece about him and their relationship. The charm of Angelfire lies not in an excessive and permanent demonstration of love. I love it for its rare signs of affection and because they are not very frequent, they are even more meaningful. I never waited with so much anticipation for a literary couple to kiss. Moulton tortured me all along with tender hugs or slight gestures of affection.
The love story appears natural, not forced. Ellie and Will are teenagers at heart, war mates and lovers. The mistake? Their love is forbidden by the secrets which lie in their very existence.
In the end Moulton made me almost cry, Ellie’s and Will’s love is a sweet and natural but very sad one.
Funny and at the same time exciting is the age difference between Will and Ellie, in modern terms and considering all the past lives of our heroine.
Another dominant aspect of Angelfire are fighting scenes.
As in no other YA novel about battling evil creatures, Angelfire shows many scenes that contain violence. These fight scenes evoke action events and demonstrations of our heroes talents. For a romance fan like me some of the fighting scenes become too raw, but they still support the atmosphere of a strong story, heroine and novel very well.
~ We love this book because… ~
1) we love getting jewellery
2) a nurse must be able to convince the most reluctant patient
3) we love men who never break their promises
4) being a coward can sometimes be the hardest decision
5) we all need holidays in the Caribbean
~ The Verdict ~
Where have the 2011debut authors got their writing skills from? I really appreciate Moulton’s extraordinary writing style. The story has very few slow paced moments, characters are well developed with potential for more, dialogues are comprehensible and entertaining.
Angelfire does not really end with a cliffhanger, still I urgently need to know how Ellie’s and Will’s relationship and the war against reapers continues.
Posted by Miss Page-Turner at 4:06:00 PM