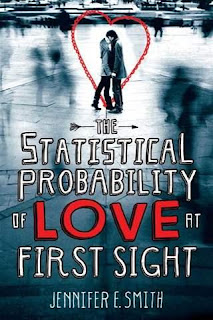 Who would have guessed that four minutes could change everything?

Today should be one of the worst days of seventeen-year-old Hadley Sullivan's life. She's stuck at JFK, late to her father's second wedding, which is taking place in London and involves a soon to be step-mother that Hadley's never even met. Then she meets the perfect boy in the airport's cramped waiting area. His name is Oliver, he's British, and he's in seat 18C. Hadley's in 18A.

Twists of fate and quirks of timing play out in this thoughtful novel about family connections, second chances and first loves. Set over a 24-hour-period, Hadley and Oliver's story will make you believe that true love finds you when you're least expecting it.

Everyone has at least once referred to it, that ominous feeling or concept known as love at first sight. Jennifer E. Smith attempted a funny and absolutely charming approach to that moment and did a quite fantastic job I must say.

Jennifer E. Smith chose a plane and flight terminals as the main setting of her story around love at first sight. She doesn’t need many words to build the story around Hadley and Oliver. It feels like they’ve known each other for several years, than hours. They only have a small time span to get to know each other and I definitely would have loved to witness a few more of their moments and conversations.

This story is about coincidences and the chances life has to offer in these rare magic moments of fate. Hadley and Oliver make you constantly sight. So instant their immediate connection is, so absolutely sweet it is at the same time. I couldn’t resist Oliver either. He’s handsome, British, ironic and comical. What else do girls want ? I’m scared of flying, but with someone like Oliver, this fear would immediately be forgotten.

5/5 ***** THE STATISTICAL PROBABILITY OF LOVE AT FIRST SIGHT- Utterly charming and adorable! Hadley & Oliver are a true dream couple, both friends of faith and icons of everyone who believes in love at first sight.

* Read an excerpt of THE STATISTICAL PROBABILITY OF LOVE AT FIRST SIGHT here.

* Thanks to Headline Publishing and Sam Eades for sending me a copy of THE STATISTICAL PROBABILITY OF LOVE AT FIRST SIGHT!