Book Review: The Alchemy of Forever (Incarnation #1) by Avery Williams 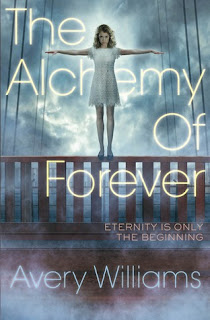 After spending six hundred years on Earth, Seraphina Ames has seen it all. Eternal life provides her with the world's riches but at a very high price: innocent lives. Centuries ago, her boyfriend, Cyrus, discovered a method of alchemy that allows them to take the bodies of other humans from jumping from one vessel to the next, ending the human's life in the process. No longer able to bear the guilt of what she's done, Sera escapes from Cyrus and vows to never kill again.

Then sixteen-year old Kailey Morgan gets into a horrific car accident right in front of her, and Sera accidentally takes over her body while trying to save her. For the first time, Sera finds herself enjoying the life of the person she's inhabiting--and falling in love with the boy who lives next door. But Cyrus will stop at nothing until she's his again, and every moment she stays, she's putting herself and the people she's grown to care about in danger. Will Sera have to give up the one thing that's eluded her for centuries: true love?

The story of THE ALECHEMY OF FOREVER starts in the year 1349 in London. The prologue introduces us to the two main characters, our heroine Seraphina and her boyfriend Cyrus and the original time they lived in. But it’s only a short glimpse we get. We are fast thrown back into present time, now to San Francisco. Here lives a group of extraordinary humans. A bunch of immortals thanks to Cyrus and centuries old alchemy.

Seraphina has lived many lives and claimed the bodies of countless young women over the decades. Now she decides that she wants to let go of this world and don’t live the life of others anymore. Seraphina is one of the YA heroines who actually thinks about her decisions thoroughly. She is so courageous and humble. I could really feel her despair to die and still understand her struggles to survive as long as possible.

Luckily a chain of events prevents her suicide and Sera gets a last chance to live a new life in the body of teenager Kailey. Apart from tyrant Cyrus. She might have had many different lives, still to me it felt like this one in Kailey’s body was her first real existence after her life in England.

Like many other stories, Seraphina’s story is about a boy. A beautiful and understanding boy who is there when he is needed. Noah. He and Kailey’s parents and brother are the first people beside her best immortal friend Charlotte, who make her feel home again. After such a long long time. I loved how Noah and Sera or ,as he knows her, Kailey got closer. I would have appreciated a stronger profile of Noah though. More about his past with Kailey or a deeper insight into his feelings for Kailey and in how far her sudden change in personality influenced them.
It seems like Noah always had feelings for Kailey, but now that she’s changed into a different, caring and open minded, girl, what does he think of her exactly? More Noah in the sequel to THE ALCHEMY OF FOREVER please!

Seraphina’s way from being a wealthy dying woman dependent on her centuries old lover to a teenage girl with a crush on her neighbour Noah is plastered with adventurous chases. So compelling! The concept of alchemy giving humans the power to be immortal for centuries is very clever. I was eager to find out more about Cyrus' tricks and the possibilities of something as powerful as old magic.

Cyrus might be Seraphina’s first love and a charming man in 14th century England, but he is the perfect antihero in present San Francisco. Cyrus is cruel and controlling. An evil mind that has no rival in THE ALECHMY OF FOREVER. He is reckless and that’s what makes him such a dangerous enemy.

Avery Williams did a perfect job with her contrasting characters! I especially liked Sera and Noah and Cyrus as unequal opponents in the fight for Seraphina’s love. The story is told from Seraphina’s point of view as a 1st person narrator. Scenes are rather short, just as the book itself. But they give us sufficient details and fabricate an unique story.

The sequel to THE ALCHEMY OF FOREVER better comes out soon, because the ending of book one nearly killed me. I cannot believe Avery Williams left us at that!

5/5 ***** THE ALCHEMY OF FOREVER- A Charismatic & ingenious read that fast becomes one of your YA favourites!

THE ALCHEMY OF FOREVER is a quick, nevertheless genial, read by debut author Avery Williams. I’m in need of a sequel and can’t wait to read it as soon as possible!

* Read an excerpt of THE ALCHEMY OF FOREVER!

* Get to know the characters!

* For further information about Avery Williams and her books visit www.incarnationseries.alloyentertainment.com

* Thanks to Simon & Schuster UK for sending me a review copy!!