Book Review: The Hunt (The Hunt #1) by Andrew Fukuda 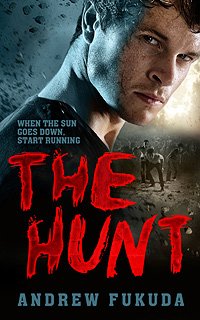 Against all odds, 17-year-old Gene has survived in a world where humans have been eaten to near extinction by the general population. The only remaining humans, or hepers as they are known, are housed in domes on the savannah and studied at the nearby Heper Institute. Every decade there is a government sponsored hunt. When Gene is selected to be one of the combatants he must learn the art of the hunt but also elude his fellow competitors whose suspicions about his true nature are growing.

THE HUNT isn't exactly a book that'd appeal to me I thought. Zombies? So not my thing. Yet I decided to gave it a try when a copy arrived at my doorstep. And I think we should give more books out of our comfort zone a try. In the end they can surprise you and turn out as quite enjoyable reads, just like THE HUNT.

One fact that I immediately liked about THE HUNT is that the story is told from a male character's point of view, Gene. I think his character made the jump into the story easier when the first chapters and the concept of the society in general still didn't make much sense to me. Gene is a very comfortable character to follow. I'm not well accquainted with the zombie world and its possibilites so if you aren't either, just plan in some more time to adjust to its gory details.

Andrew Fukuda applied a very casual writing that fits Gene's train of thought well. He's just like everyone else (so it seems). They think he is one of them, but truly he is at danger 24/7. He's a human ("heper" as it's called in the book) in a world of a new kind of zombies. And you know what zombies do, right? Eat humans. You think he'd hide from them, but his father taught him to pretend, to be one of them. So he has to folllow all the (weird) customs to fit in. Like there cannot be a single hair on his body, or he cannot alllow himself to show any reactions to cold. And there are many more interesting details to learn about Fukuda's creatures.

Better don't let me start on the gestures,  mimics and customs they apply. The zombies have the strangest way of expressing themselves. I don't want to spoil the fun, but their way of having sexual pleasure was just way too bizarre. So, zombie fans, I guess Andrew Fukuda gave even you many cool details to the species to enjoy.

In this case, the title of the book has a strong correlation to its story. The hunt is the one thing that the story constantly is about, the event everything's leading to. Some time in the first chapters the big hunt is announced which turns the zombies' world upside down. That's where the things start to unravel and Gene's getting more despearate with every passing second to stay unnoticed. To survive.

And there's a girl. Her name's Ashley June. She was one of my main points of interest. She's a mysterious character who has a connection to Gene. Although it's too dangerous for him to allow contact to zombies, it looks like he's falling for her. So in between all the rumble and anxious feelings there's also room for moments of quiet and budding romance.

There's a lot of action towards the end of the story and hords of zombies present, so get ready for fights and fun. Some very gruesome scences and elements are involved, but who wouldn't expect a zombie book to be a little bit gory.

I didn't know what happened, but at some point I just felt the urge to read on and on. Fukuda involves a kind of countdown to the day of the hunt and it felt like my brain was inevitably connected to it. It might not be my favourite genre, but THE HUNT was definitely a nice change.

* Don't miss the next book in this series, THE PREY!

* Read an excerpt of THE HUNT here.

* Watch the book trailer for THE HUNT.

* Become a fan of the THE HUNT UK fanpage on Facebook!

* For more information about Andrew Fukuda and his books visit www.andrewfukuda.com

* Thank you Simon & Schuster UK for sending me a copy for review!