It got much colder and rainier these days and I feel like lighting candles and, uncharacteristically, also like a good spooky story. I haven't read many so far, but I have a few in mind that could appeal to you if you are feeling the same desire to read something with the creep factor! 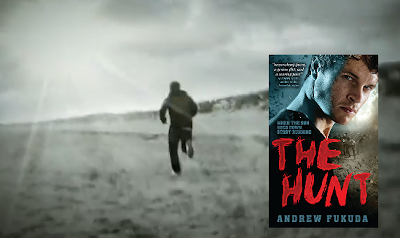 The Hunt by Andrew Fukuda

Against all odds, 17-year-old Gene has survived in a world where humans have been eaten to near extinction by the general population. The only remaining humans, or hepers as they are known, are housed in domes on the savannah and studied at the nearby Heper Institute. Every decade there is a government sponsored hunt. When Gene is selected to be one of the combatants he must learn the art of the hunt but also elude his fellow competitors whose suspicions about his true nature are growing

What you get: lots of ravenous zombies, blood, raw meat, fighting for survival


"Come what may, he is going to them. No matter the sun: he will bound into the village, tear down doors and windows, rip the hepers to shreds, sink his teeth into the soft give of their necks, even as the sun burns into his skin and melts it into wax, even as his eyeballs explode and ooze vitreous juice down his sliding face, nose, cheeks." -p. 167 The Hunt


"The land is instantly illuminated in an embossed black and white, the eastern mountains riven with black crevices, the river reflective like melted silver. I shoot my head for a look backward, and in that milisecond before the land plunges into darkness again, I see them: an endless number streaming towards us [...]" -p. 281 The Hunt 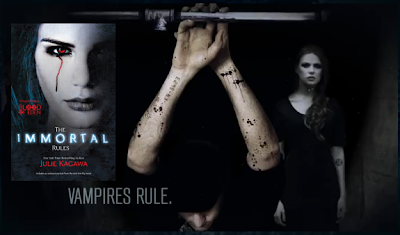 The Immortal Rules by Julie Kagawa

"In a future world, vampires reign. Humans are blood cattle. And one girl will search for the key to save humanity."Allison Sekemoto survives in the Fringe, the outermost circle of a vampire city. By day, she and her crew scavenge for food. By night, any one of them could be eaten.

Some days, all that drives Allie is her hatred of "them." The vampires who keep humans as blood cattle. Until the night Allie herself is attacked--and given the ultimate choice. Die...or become one of the monsters.

Faced with her own mortality, Allie becomes what she despises most. To survive, she must learn the rules of being immortal, including the most important: go long enough without human blood, and you will go mad.

Then Allie is forced to flee into the unknown, outside her city walls. There she joins a ragged band of humans who are seeking a legend--a possible cure to the disease that killed off most of humankind and created the rabids, the mindless creatures who threaten humans and vampires alike.

But it isn't easy to pass for human. Especially not around Zeke, who might see past the monster inside her. And Allie soon must decide what--and who--is worth dying for.

" I had to keep it away from my throat. And then the others closed in, screaming, ripping. And the last thing I remembered, before the bloody red haze finally melted into blackness, was a flash of something bright and the rabid's body dropping onto my chest while its head continued to bite my arm." -p. 74 The Immortal Rules


"He was grimacing, teeth clenched tightly together, his fangs smeared with blood. Blood also spattered his clothes, fresh stains against the old ones, and pooled from the holes in his chest and stomach, the gunshot wounds he had taken head-on." -p. 181 The Immortal Rules 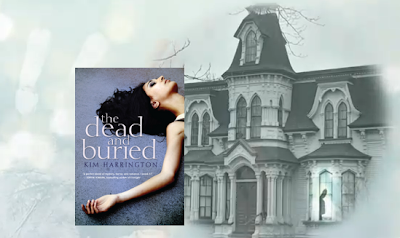 The Dead and Buried by Kim Harrington

A haunted house, a buried mystery, and a very angry ghost make this one unforgettable thriller.

Jade loves the house she's just moved into with her family. She doesn't even mind being the new girl at the high school: It's a fresh start, and there's that one guy with the dreamy blue eyes. . . . But then things begin happening. Strange, otherworldly things. Jade's little brother claims to see a glimmering girl in his room. Jade's jewelry gets moved around, as if by an invisible hand. Kids at school whisper behind her back like they know something she doesn't.

Soon, Jade must face an impossible fact: that her perfect house is haunted. Haunted by a ghost who's seeking not just vengeance, but the truth. The ghost of a girl who ruled Jade's school — until her untimely death last year. It's up to Jade to put the pieces together before her own life is at stake. As Jade investigates the mystery, she discovers that her new friends in town have more than a few deep, dark secrets. But is one of them a murderer?


What you get: a haunted house, possession, a ghost, paranormal occurrences, revenge


"My heart thumped so hard it hurt. I clutched at my chest, willing it to calm. Silence fell over the house. But in a sickening moment, I realized it shouldnt have." -p. 124 The Dead and Buried 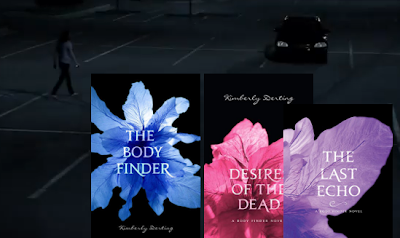 
Violet Ambrose is grappling with two major issues: Jay Heaton and her morbid secret ability. While the sixteen-year-old is confused by her new feelings for her best friend since childhood, she is more disturbed by her "power" to sense dead bodies—or at least those that have been murdered. Since she was a little girl, she has felt the echoes that the dead leave behind in the world... and the imprints that attach to their killers.

Violet has never considered her strange talent to be a gift; it mostly just led her to find the dead birds her cat had tired of playing with. But now that a serial killer has begun terrorizing her small town, and the echoes of the local girls he's claimed haunt her daily, she realizes she might be the only person who can stop him.

Despite his fierce protectiveness over her, Jay reluctantly agrees to help Violet on her quest to find the murderer—and Violet is unnerved to find herself hoping that Jay's intentions are much more than friendly. But even as she's falling intensely in love, Violet is getting closer and closer to discovering a killer... and becoming his prey herself.


What you get: murderers, bodies, stalkers, dead animals, abduction


"She fought him, trashing violently against his grip, even though he knew she was aware of his strength as he restrained her. She was like a rag doll flopping helplessly in his arms." -p. 99 The Body Finder


"She would've called out, cried for help, but she knew it was useless. and it would only serve to give [ culprit] something to focus on, some way to find her. A deadly game of Marco Polo. She already knew he was gaining ground. He had several advantages over her. Most importantly, he knew where they were." -p. 323-324 The Last Echo 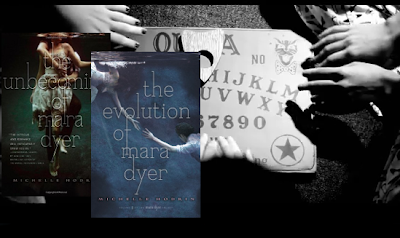 The Unbecoming of Mara Dyer & The Evolution of Mara Dyer by Michelle Hodkin
Mara Dyer doesn’t think life can get any stranger than waking up in a hospital with no memory of how she got there.

She believes there must be more to the accident she can’t remember that killed her friends and left her mysteriously unharmed.

She doesn’t believe that after everything she’s been through, she can fall in love.


What you get: an ouja board, an abandoned asylum, dead friends, tons of creepy and myserious occurrences and events, Noah Shaw (pure evil, you'll see;))

"I gagged. The still body of a gray cat lay inches from where I'd been standing, its flesh torn open, its fur streaked with red. My feet were soaked in blood." -p. 70 The Evolution of Mara Dyer

" The alligators appeared out of nowhere. My heartbeat pounded in my ears as I noticed several disembodied points of light floating in the darkness on either side of me. One pair of eyes. Three. Seven. I lost count. I was paralyzed; I couldn't go forward but I couldn't go back." -p. 331 The
Unbecoming of Mara Dyer

"I woke up the next day in a skeletal, institutional bed inside the Tamerlane State Lunatic Asylum. The mattress beneath me was torn to pieces and filthy." -p. 347 The Unbecoming of Mara Dyer 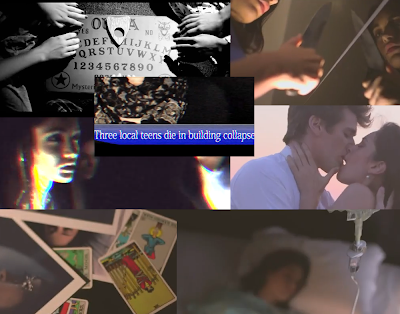 
Books I haven't read yet, but that sound oh so scary! Tell me, have you read them?

* The screenshots displaying the various book covers were taken from the official book trailers. Because there is no trailer for the dead and buried yet, I had to use the Clarity book trailer, for Kim Harrington's debut novel.
Posted by Miss Page-Turner at 2:37:00 PM

Email ThisBlogThis!Share to TwitterShare to FacebookShare to Pinterest
Labels: Halloween