The INDIGO AWAKENING blog tour is the first I'm being a part of in 2013. What a great book and blog tour to kick off the new year! I got to ask two characters, Gabriel and Kendra, a few questions and then Jordan Dane tells us who she would want to play her INDIGO AWAKENING characters in a movie if she'd got to pick.


When did you first notice that you were different than other kids?


I knew I was different when I heard my mother and father arguing in the middle of the night—about me. That was the first time I ever heard my father say the word “freak” and knew he meant me. My mother never made me feel bad about the way I am. Quite the opposite in fact, but I still hear his voice. I questioned everything back then. After my mother helped me embrace my gift, the dead found me and it seemed natural. They never scared me, not the way my father did.
The dead don’t always have sad stories. Sometimes they make me laugh and there’s another advantage to having them as friends. Whenever I order a pizza, I can make it pepperoni and pickles if I like, and there’s more slices for me.


Can you remember your first vision and what it was about?

Rayne is the one who made me believe I actually have visions. Before her, I thought what I drew came from weird dreams. The first time it happened, I woke up to see I had the face of some dude on my stomach. I thought it was a damned tattoo. When I realized the only explanation was that I had done it with an ink pen in my sleep, I washed it off and bought my first sketchbook. It was embarrassing, really.


Who is your favourite action hero? And if you could pick a superpower what would it be?

I named my dog after my favorite comic book super hero, Hellboy. Who wouldn’t want to be a demon monster hunter without fear? For me to pick a superpower feels rather redundant, but it would come in handy to be invisible. That would give me a good laugh. Yeah, I’d like that.


What are your most cherished childhood memories?

Opening day at the circus, my mother had a good luck ritual that involved Hellboy and me. Straight away she’d make me blueberry pancakes, with butter no syrup. When Hellboy was alive, he’d be invited too. His cakes were in the shape of cats. My mother had a rather peculiar sense of humor.

I also have very fond memories of picnics with her in the Bristol Mountains. Behind my uncle’s manor house, there is a worn path. We’d hike to the high meadow with me carrying our basket. She had a favorite spot near a large boulder and she made sure that everything in our picnic basket would be an adventure for me to try. My mother lived life as if every second counted. That was her gift to me.

What did you think when you met Rayne for the first time? And what had your life been like before you met her?

I hated seeing her so afraid. That made me angry. Not a good thing for me. I didn’t think about anything that night except helping her and scaring the piss out of the bastards who were after her. I worked up my best stuff at the old zoo. Rather proud of that actually.

But the absolute best moment for me was catching her in my arms when she fell. Things might have turned out differently if I had dropped her, but I think about that very second all the time. Up close her eyes are amazing. My sweet, precious girl. Being on the run, I never had much experience with girls. She made it easy for me.

What had my life been like before her? I had nothing and didn’t even know it. I’m not sure I would have ever found my way home without her. She talks about how I saved her that night, but she’s the one who saved me.

You're very good with books. Ever thought about becoming a librarin? ;)
Quite a noble profession, but I wouldn’t know how to be quiet, I’m afraid.

How does it feel to be connected to other Indigo Children?

That’s hard for me to explain to anyone who is not Indigo, but I’ll try. Experiencing the collective is like touching the face of God and understanding His purpose, the way humanity is supposed to be. There is nothing more beautiful. I wish everyone knew how that feels. I hear the voices most when I tend my garden. With my hands in the soil, I feel connected to everything.


What did you think when you first sensed your special mental connection to Lucas?

It frightened me and thrilled me at the same time. Lucas is special. For someone so young, he is powerful. That first intimacy of connecting to an Indigo soul is always extraordinary, but with Lucas it felt as if we were first time lovers. Most days I feel inadequate in his presence.


If you could pick a perfect first date what would it be like and with who?

I’ve never thought of myself as normal. Too much has happened and dating seems like something others do, but since you expect an answer, I’ll try to give you one. If I had one day where I didn’t feel fear for my Indigo family, I would take the children to the circus. Gabriel might have influenced me to say this, but there is magic in a circus and children should believe in magical things. As for the boy I’d take, there is someone special and I’d love to see him smiling and happy. He always brings me gifts, but a day at the circus would be my present to him. Sharing his name would jinx it, but I think you know who I’m talking about.


If you could change anything about your past what would it be?

I don’t regret my gift and being an indigo, if that’s what you’re asking. I’m blessed with an Indigo soul. It’s a privilege that I wouldn’t trade, even for a better life. Anything else about my past is off limits.

What would you wish for the Indigo Childrens' future?

As for my Indigo children and their future, I wish freedom and acceptance for them. Anything else they can handle. They are extraordinary.

Because of what you are, the Believers will hunt you down.

Voices told Lucas Darby to run. Voices no one else can hear. He’s warned his sister not to look for him, but Rayne refuses to let her troubled brother vanish on the streets of LA. In her desperate search, she meets Gabriel Stewart, a runaway with mysterious powers and far too many secrets. Rayne can’t explain her crazy need to trust the strange yet compelling boy—to touch him—to protect him even though he scares her.
A fanatical church secretly hunts psychic kids—gifted “Indigo” teens feared to be the next evolution of mankind—for reasons only “the Believers” know. Now Rayne’s only hope is Gabe, who is haunted by an awakening power—a force darker than either of them imagine—that could doom them all. 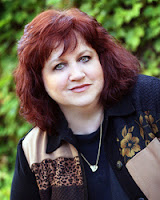 Jordan Dane launched her back-to-back debut suspense novels in 2008 after the three books sold in auction. Ripped from the headlines, Jordan's gritty plots weave a tapestry of vivid settings, intrigue and dark humor. Publishers Weekly compared her intense pacing to Lisa Jackson, Lisa Gardner, and Tami Hoag - and named her debut book No One Heard Her Screamas Best Book of 2008. INDIGO AWAKENING will be the third YA novel written by Jordan Dane. 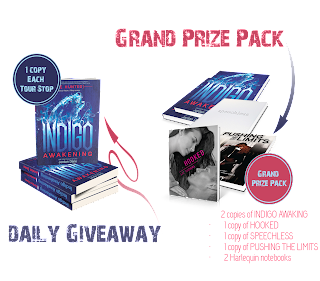 Contest Info:  There are two giveaways for his tour!

1.) The first giveaway  is a copy of Indigo Awakening for your Tour Stop.
Enter via Rafflecoper!

2.)The second giveaway is Harlequin Grand Prize Package, including 2 copies of Indigo Awakening, 1 copy of Speechless, 1 copy of Pushing The Limits, 1 copy of Hooked and 2 Harlequin Notebooks.
The Grand Prize winner will be drawn from entries from all Tour Stops!

Simply enter via the Rafflecoper widget and get extra entries for tweeting (once per TourStop), following Jordan on twitter, leaving your mailing address (for faster shipment of the prize) and for leaving a comment at each Tour Stops (one extra entry for each TourStop)

Thanks to Heather and Danny for organising the tour and letting me be part of it! And huge thanks to Jordan Dane for contributing awesome special content!
Posted by Miss Page-Turner at 12:00:00 AM