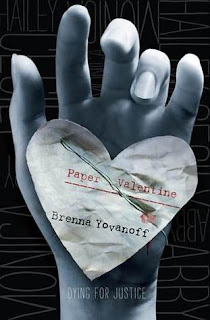 
The city of Ludlow is gripped by the hottest July on record. The asphalt is melting, the birds are dying, petty crime is on the rise, and someone in Hannah Wagnor's peaceful suburban community is killing girls.

For Hannah, the summer is a complicated one. Her best friend Lillian died six months ago, and Hannah just wants her life to go back to normal. But how can things be normal when Lillian's ghost is haunting her bedroom, pushing her to investigate the mysterious string of murders? Hannah's just trying to understand why her friend self-destructed, and where she fits now that Lillian isn't there to save her a place among the social elite. And she must stop thinking about Finny Boone, the big, enigmatic delinquent whose main hobbies seem to include petty larceny and surprising acts of kindness.

With the entire city in a panic, Hannah soon finds herself drawn into a world of ghost girls and horrifying secrets. She realises that only by confronting the Valentine Killer will she be able move on with her life - and it's up to her to put together the pieces before he strikes again.

Murder victims with a sweet valentine near their bodies are found . Girls only. Strewn around the dead girls, the police finds small toys and cute little items that have an infantile and playful appeal.
But what message does the murderer who brutally slays his victims want to deliver?
PAPER VALENTINE is set in small town Ludlow. And exactly that idyll and the contrast created by the cold-hearted homicides are what drew me into the story. It's the dichotomy between knowing everyone in this town and yet knowing that you aren't safe anymore, that let me find great pleasure in reading Brenna Yovanoff's newest novel. Clever contradictions are one of Brenna's strongest writing accomplishments in PAPER VALENTINE.
Our protagonist, Hannah, is anything but fake. Her melancholic and considered being made me appreciate her as our narrator and inofficial crime investigator.
Then a considerable part of the story’s focus lies on Hannah’s friendship with her best friend Lillian, a ghost. She died six months ago and has come back to haunt Hannah. She and a few other ghostly occurrences add a touch of paranormalcy to the story.
There are longer sequences filled with conversations between Hannah and Lillian about their past, friendship, finding the killer and the reason that lead to Lillian's death. Somehow these talks didn't even feel helpful to me and Lillian never like a character who belonged to the story. Like an interference factor, a ghost that couldn't move on, but was highly encouraged to.
PAPER VALENTINE has also a love story to present. Unexpected, but appreciated. Look forward to meet interesting character Finny Boone.
The story is supported by flashbacks including Lillian and also Finny, the boy Hannah’s slowly falling for, which throw a new light on present interactions with them both.
Brenna Yovanoff's characters are flawed, show self-doubts and are therefore even more believable and appealing. But in the crime case at hand the lines blur and you don’t know who to trust anymore, everyone appears guilty and dangerous.
It’s a creepily nice touch that Brenna Yovanoff plays with the motif of a valentine, originally used to show someone your love, here its meaning pervertedly distorted and pinned to the murderers newest conquests.
The mixed in occult elements were according to my taste and the case had a really great creep potential. I just  wish Brenna Yovanoff had adopted a more insane and horrific course.
In the end some of the built-up tension simply evaporated. We are presented with a culprit and an explanation as to why those girls were murdered, but it somehow left me a tad disappointed. There were just too many unanswered questions.

3,5/5 **** PAPER VALENTINE – A chilling & ghostly murder mystery. Be careful whose valentine you want to be!

A strong and direct plunge into the story  leads to a thrilling murder mystery with paranormal occurrences, romantic encounters and quiet moments of insights and self-evaluations. The solution to the gruesome crimes and ending of Hannah’s personal story though appeared a tad vague and weak in regard to the expectations the abstract of PAPER VALENTINE raised in me.

* Check out Brenna's other books!

* For further information about Brenna and her books visit www.brennayovanoff.com

* Thanks to Simon & Schuster UK for sending me a copy of PAPER VALENTINE for review!