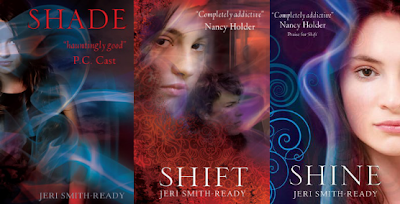 Best. Birthday. Ever. At least, it was supposed to be. With Logan's band playing a critical gig and Aura's plans for an intimate after-party, Aura knows it will be the most memorable night of her boyfriend's life. She never thought it would be his last.

Like everyone born after the Shift, Aura can see and hear ghosts. This mysterious ability has always been annoying, and Aura had wanted nothing more than to figure out why the Shift happened so she can undo it. But not with Logan's violet-hued spirit still hanging around. Because dead Logan is almost as real as ever. Almost.

It doesn't help that Aura's new friend Zachary is so understanding--and so very alive. His support means more to Aura than she cares to admit.

As Aura's relationships with the dead and the living grow ever complicated, so do her feelings for Logan and Zachary. Each holds a piece of Aura's heart...and clues to the secret of the Shift.

Note that this series review might contain slight spoilers for people who haven't read the first two books.

The Shift is an incomprehensible and strange phenomenon that appeared exactly sixteen years ago. Since then it's been controlling the lives of everyone born after it, giving them the ability to see ghosts. The SHADE series introduces ghosts as a matter of course. They are a part of modern-day life after the Shift instead of some paranormal happening to fear. No people are being haunted. Everyone knows about them and they aren’t the scary spirits we know from other books, which got me interested to read SHADE in the first place. This series presents us with a not at all ordinary ghost story paired with scientific and cultish elements involving a lot of  research about what's behind the Shift.

Aura has an exceptional job, as a kind of ghost whisperer. She's supposed to hear out ghosts and work together with her lawyer aunt. Which teen wouldn't want such a job? In the beginning of SHADE she's together with her boyfriend Logan, a hot musician. And everything seems to be just cut out of a contemporary romance novel. He's celebrating his birthday, they're having a good time and are about to take the next step in their relationship, when.. yeah, when he's being a jerk and dies. His death had been announced in the summary, but I was shocked at the stupidity behind it. Now thanks to the Shift it is possible that he's coming back, even so for a larger part of the story. And with Logan, comes the music. You'll get to be a groupie and just enjoy the show with all the musical aspects Jeri Smith-Ready put into her story!

In case you might be wondering - it is always one of the questions I am asking first - there is also a love triangle. Aura, Logan and Zachary. Those three have a lot of issues to sort out thoughout the entire series. As opponents, as lovers, friends and even variations in between.
I often feel the need to choose between the boys who are fighting for the girl. In the SHADE series I was drawn to both of them, could equally understand their motifs and feelings for Aura. Logan's been there from the beginning and I so badly wanted him to find a happy ending, even as a ghost. Then there's Zach, the super nice and supportive Scottish beau who stole my heart with no effort. He just walked into the story and became an inseparable part of it. It's as simple as that!
Aura & Logan as Aura & Zach have their sweet and sexy moments. Their relationships are steadily emerging, updating, changing. And I really liked the way their relationships and Aura's feelings took from the first to the last book. It always seemed like she was on a journey and in the end she's finally found her way home.
Aura and Zach's fate - for various reasons - being so closely intertwined, adds a pretty nice touch to the story. Zach is the sweetest and it can't be summarised all that he’s doing for Aura. Their research and connection to the Shift makes up a large part of the story. There is much to discover! But their interest also turns them into targets. And soon they find themselves hunted down by a bunch of bad guys, which adds a kind of really good spy-action-thrill to the books.

Whereas SHIFT didn't convince me at all, SHADE poses as a great start into this series. The second book was the most unappealing out of the three books, because the story and Aura don't seem to pick up speed, but take three steps backward, meaning her getting involved with even more boys. Please no! But I was relieved to find SHINE a worthy conclusion and the best book of the entire series.

The Irish influences were pure joy to my heart. I've never even been there, but this country sure has something mysterious and compelling about it. Every time I see pictures or read about it, it feels like it's calling to me with its ancient history and culture.
Aura and Zach travel the Irish landscape, explore the myths behind Newgrange and hopefully return with what they've come to find. Jeri Smith-Ready fitted their journey with a massive original and authentic atmosphere.

4/5 **** SHADE series - Purple ghosts, seeking love and mysteries in the heart of Ireland. This trilogy is very rock star!

This is an entirely different kind of ghost story. It's funky, offers cultish references and a huge amount of musical support. There are governmental conspiracies and a bunch of really bad guys that are after Aura and Zach. Romance and action both guaranteed! Especially the last book in this series left me hoping to see a new book by Jeri Smith-Ready on my shelf very soon!

* Want to read more about the SHADE series? Jeri has written a few short stories and extra scenes. Find a list of them here.

*For further information about Jeri and her books, visit www.jerismithready.com

* Thanks to Simon & Schuster UK for sending me a copy of SHINE for review!