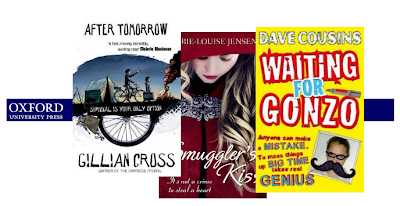 This is your chance to win three of the Oxford University Press MG/YA spring titles! Just enter the rafflecopter widget till April 15th. This giveaway is open internationally!


After Tomorrow by Gillian Cross


What if you woke up tomorrow and everything had changed? Money is worthless. Your friends are gone. Armed robbers roam the streets. No one is safe. For Matt and his little brother, Taco, that nightmare is a reality. Their only hope of survival is to escape through the Channel Tunnel. But danger waits on the other side...Stay or go. What would you do?


It's not a crime to steal a heart

Smugglers are cut-throat rascals. At least that's what Isabelle's always been told. But when she's rescued from drowning at sea by the crew of a notorious smuggling ship, her principles are thrown into confusion. Outwitting the king's men fills her with excitement, especially when she's with one mysterious smuggler in particular . . .


Waiting for Gonzo by Dave Cousins


Meet Oz . . . he's got a talent for trouble but his heart's always in the right place (well, nearly always).
Uprooted from his friends and former life, Oz finds himself stranded in the sleepy village of Slowleigh. When a joke backfires on the first day at his new school, Oz attracts the attention of Isobel Skinner, the school psycho - but that's just the beginning.
After causing an accident that puts his mum in hospital, Oz isn't exactly popular at home either. His older sister's no help, but then she's got a problem of her own . . . one that's growing bigger by the day.
Oz knows he's got to put things right, but life isn't that simple, especially when the only people still talking to you are a hobbit-obsessed kid and a voice in your own head!
Packed with action, heart and humour, Waiting for Gonzo takes you for a white-knuckle ride on the Wheel of Destiny as it careers out of control down the Hillside of Inevitability. The question is, do you go down laughing? Or grit your teeth and jump off?


* You enter for a chance to win three proof copies of Smuggler's Kiss, After Tomorrow and Waiting for Gonzo
* International
* The giveaway starts on March 12th and will end on April 15th.
* Enter the rafflecopter widget!
* Good luck :)