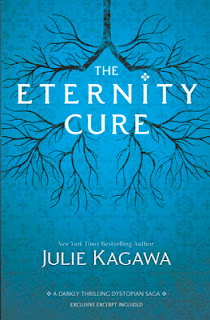 Allison Sekemoto has vowed to rescue her creator, Kanin, who is being held hostage and tortured by the psychotic vampire Sarren. The call of blood leads her back to the beginning—New Covington and the Fringe, and a vampire prince who wants her dead yet may become her wary ally.

Even as Allie faces shocking revelations and heartbreak like she’s never known, a new strain of the Red Lung virus that decimated humanity is rising to threaten human and vampire alike.

THE ETERNITY CURE was a sequel I wasn't sure I would read too soon after the first book. I saw the book on Netgalley and like any other book addict couldn't resist to request it. It took me some time to finish THE IMMORTAL RULES and the second book was just as thick. As I had predicted the story was more on the slow side in the beginning. Allison Sekemoto is wandering around, searching for her sire Kanin. I felt like I was looking for something as well during that first third of the story and Allison's restlessness and her desire to make progress were passed on to me. When things finally started to get under way I noticed fast that THE ETERNITY CURE was a sequel that for once would bring the story forward and not just step on the same spot most of the time.

Allison is joined by a familiar face known from THE IMMORTAL RULES, who appears as an unknown ally. Their constant quarreling adds a new zappiness and snark to our dismal journey through deserted planes and crumbling cities. But Allison isn't the only one searching for someone. Guess who else joins their group? A certain fair-haired boy with the warmest and kindest heart. Yes, Zeke! His and Allison's romantic feelings for each other are another puzzle they're trying to figure out on their way to finding a cure. I think I liked their moments and love story in THE ETERNITY CURE even better than in the first book, because a greater development becomes apparent.

This books' title is its subject, too. Allison and her new ally - one that will certainly surprise and amuse you - are hunting psycho vampire Sarren who is holding Kanin hostage. They are also searching for a cure to the disastrous virus that's threating to destroy both humans and vampires. Theories and possible solutions are discussed and old abandoned labs explored. Julie's BLOOD OF EDEN series is the first series centering around a deadly virus that I actually felt drawn to.

THE ETERNITY CURE promised hope, but is an even darker read than THE IMMORTAL RULES, full of atmosphere. It's a mix between dystopian and horror, vampires and zombies (just thinking about the manic rabids makes me shudder). This is probably no book for a queasy stomach and there will be a lot of fighting. It contains various descriptive scenes of macabre, violent and pretty bloody nature.

4/5 **** THE ETERNITY CURE – A vampire world with the most chilling and delicious post-apocalyptic feel about it!

Allison isn't new to the vamp business anymore. As she gains more experience and strength, she as a character very much grew on me, too. With an honorable goal in mind Allison is embarking on a gripping and, most important, life-saving quest that will lead readers through many states of emotions, varying from bright hope to deepest despair. Be warned, this book ends with a mean cliffhanger!

* Want to learn more about the world Allison Sekemoto lives in? Then you should read the prequel to THE IMMORTAL RULES, TIL THE WORLD ENDS!

* Read an excerpt of THE ETERNITY CURE.

* For further information about Julie Kagawa and her books visit www.juliekagawa.com

* Thanks to Harlequin Teen and Netgalley for the chance to review THE ETERNITY CURE!