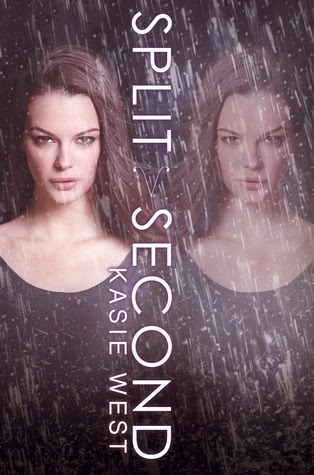 
Life can change in a split second.

Addie hardly recognizes her life since her parents divorced. Her boyfriend used her. Her best friend betrayed her. She can’t believe this is the future she chose. On top of that, her ability is acting up. She’s always been able to Search the future when presented with a choice. Now she can manipulate and slow down time, too . . . but not without a price.

When Addie’s dad invites her to spend her winter break with him, she jumps at the chance to escape into the Norm world of Dallas, Texas. There she meets the handsome and achingly familiar Trevor. He’s a virtual stranger to her, so why does her heart do a funny flip every time she sees him? But after witnessing secrets that were supposed to stay hidden, Trevor quickly seems more suspicious of Addie than interested in her. And she has an inexplicable desire to change that.

Meanwhile, her best friend, Laila, has a secret of her own: she can restore Addie’s memories . . . once she learns how. But there are powerful people who don’t want to see this happen. Desperate, Laila tries to manipulate Connor, a brooding bad boy from school—but he seems to be the only boy in the Compound immune to her charms. And the only one who can help her.

As Addie and Laila frantically attempt to retrieve the lost memories, Addie must piece together a world she thought she knew before she loses the love she nearly forgot . . . and a future that could change everything.

You know that PIVOT POINT was among the top three of my favourite books of 2014. I read it as a standalone and was ecstatic when I found out there was going to be a sequel, because things weren't completely wrapped up in the end of book one. Now I poured all my hope in SPLIT SECOND for Addie and Trevor to find their perfect ending. These two characters really grew on me in the first book and I was heartbroken about how things ended for them.

So I'd pinned my hope on SPLIT SECOND, but after reading the second book early in December I wasn't sure this book was the sequel I had been dreaming about for so many months. That was mostly because Addie and Trevor's romance couldn't pick up right where it was at its best in the first book and practically repeated itself only in a much more unfortunate way. Nonetheless, I adore the idea behind it that they would always find back to each other, no matter how many times you'd wind back things to a point where the two wouldn't know each other.

What I thought of as a nice bonus in advance fast became my favourite part about SPLIT SECOND. I'm talking about the additional point of view that has been added to the story. Chapters are alternating between Addie and her best friend Laila. Now that Laila has got her own story to tell, we are granted an extra hot romance in her chapters. Connor is just as tough and unrelenting as Laila and theirs is a very fierce love story that will have you fanning yourself.
Furthermore there's a great emphasis on the close and honest friendship between Addie and Laila which was another of my favourite parts about SPLIT SECOND. Not many YA stories are all set on taking time to develop a profound girl friendship beside all the drama that would be possible in other parts of the story.

Believe me, you will want to read this and want to know what happens to Addie, Laila and her friends. It isn't like I've completely fallen out of love with the characters and the world, on the contrary. Sometimes the plot just didn't feel like it was going in the right direction, at least not purposeful enough. Knowing that SPLIT SECOND would be the final book in this duology, I often criticized that the story was too hesitant and undaring in the end to pose as a model of a final book.
Kasie West didn't make as much use of Addie's talent as in book one. And that where Addie's special power to see two alternate futures, go through them and pick only one, contributed a lot to an irressistibly fast-paced, multidimensional PIVOT POINT plot.


While I was torn about the love story of Addie and Trevor and absolutly swooning over Connor and Laila, their paranormal community, hidden from people's eyes, continued to amaze me. Abilities are expanded, boundaries pushed and authorities provoked to dangerous extends.
What I love so much about the two books is that the story is set in a secret part of our world. It's not a completely new world, but something that's special enough to be kept from anyone who's not a part of it. If this book series were a TV show it could easily be one of my favourites. The mystery factor and paranormal activities would be its strong suit and there would be enough room for awesome romances and conspiracies, drama of all kinds.

4/5 **** SPLIT SECOND - Addie and Laila are two leading YA ladies who are linked by a strong friendship and who can conquer anything with their cohesive forces.

While SPLIT SECOND is just as remarkably well-written as PIVOT POINT, there were plot deficiencies not even a very strong second leading lady and her swoon-worthy love story could completely counterbalance. And even if I didn't get all the feels and heartbreak and excitement from this sequel like from Kasie's debut novel before, I can easily imagine reading two or three more books set in her secret community of paranormally gifted. Now I'm wishing on the gift of thought manipulation so that I could persuade Kasie West to write more books about Addie and Laila.

"He slammed the case shut. I tried a memory wipe one more time, but it didn't work. Tucking the chip into my pocket, I left his garage. What was wrong with me? Was I losing my ability? No. That was impossible. He must've been using something that protected him from Memory Erasers. Did he know that was my ability?
I'd get information from him. I'd just have to find another way." ― p. 42

SPLIT SECOND you might also enjoy LINKED by Imogen Howson, TAKEN by Erin Bowman and ARCLIGHT by Josin L. McQuein. I haven't read any of these, but can imagine that they could cure my pain of parting with the PIVOT POINT series. All three have mystery and paranormal aspects to their stories that sound so very thrilling.

* Want to read something different by Kasie West? Then you should read THE DISTANCE BETWEEN US, her YA contemporary debut.

* Click here to read an excerpt of PIVOT POINT.

* Want to meet Kasie West? Here are the dates of her The Lovestruck Tour with three other YA authors.

* For further information about Kasie and her books visit www.kasiewest.com.

* Thanks to Harper Collins International for sending me a copy of SPLIT SECOND for review!