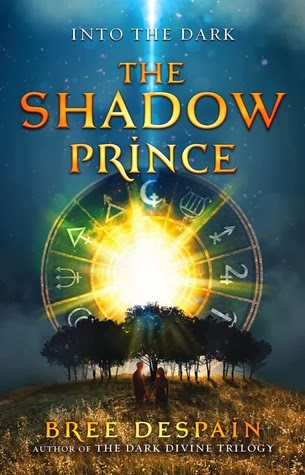 Haden Lord, the disgraced prince of the Underrealm, has been sent to the mortal world to entice a girl into returning with him to the land of the dead. Posing as a student at Olympus Hills High—a haven for children of the rich and famous—Haden must single out the one girl rumored to be able to restore immortality to his race.

Daphne Raines has dreams much bigger than her tiny southern Utah town, so when her rock star dad suddenly reappears, offering her full tuition to Olympus Hills High’s prestigious music program, she sees an opportunity to catch the break she needs to make it as a singer. But upon moving into her estranged father’s mansion in California, and attending her glamorous new school, Daphne soon realizes she isn’t the only student in Olympus who doesn’t quite belong.

Haden and Daphne—destined for each other—know nothing of the true stakes their fated courtship entails. As war between the gods brews, the teenagers’ lives collide. But Daphne won’t be wooed easily and when it seems their prophesied link could happen, Haden realizes something he never intended—he’s fallen in love. Now to save themselves, Haden and Daphne must rewrite their destinies. But as their destinies change, so do the fates of both their worlds.

THE SHADOW PRINCE was yet another first book in a trilogy influenced by Greek mythology that spiked my interest as soon as I'd noticed it had a set release date. This is Bree Despain's fourth book and you see that she knows exactly how to write engaging fiction with characters you can laugh with and relate to. So I think you should meet Daphne and Haden now.

Daphne is taken from her well-regulated life in a small town in Utah, where she's been living with her mother, to leave for California with her rock star Dad who she hasn't seen in ages. Before, she's been forbidden to leave town and therefore has never seen all the things she wanted to see and never got to realize her biggest dream of becoming a singer. When our very talented and humble protagonist is faced with such severe restrictions you just can't but feel for her, right?

Now that Daphne is attending Olympus Hills High in California she learns a lot, meets new people for the first time in her life and even investigates the strange happenings in her new home. Beside her testing the new bonds with her father, she's spending more and more time with the other new kid in town, Haden Lord. As you already know he is a prince from the underrealm and set out to take Daphne with him. So you can expect a few delusions and confusions along the way to them becoming an item. I promise you, it's a treat to see Haden adapt to all the human conventions and things a normal teenager noawdays would do. His inexperience and his bedazzlement, his confusion over receiving laughter at his genuine formal requests or clumsy attempts  to convince Daphne to go out with him are just so cute in their ridiculousness. Theirs is a romance forged by the powers of fate, the recognition of a related soul, and music.

Haden's past is shaped by tragic and cruel fates which play a major role in his relationships to his mother, antagonistic father and brother. If you attempted a THE SHADOW PRINCE character study you would definitely need to put high importance on the complicated family bonds of both main characters. Besides that, music is relevant for the story and both characters, too, and plays an important role in their early courtship, as Haden would call it.

4/5 **** THE SHADOW PRINCE - Haden and Daphne are the new hot couple in the YA mythology category!

Some parts of the story could've been more progressive and could've used some tightening up. Otherwise I've got no complaints.
Where Bree Despain's THE DARK DIVINE series is one that captivated me with its engaging characters and the desperate love story that is Grace and Daniel's, I see the strong suits of THE SHADOW PRINCE more in its generel story line, the mysterious city of Olympus Hills and the Greek mythology references that are so rich with possibilities that the sequel could head in any direction.

"I did the unforgivable the day my mother died, and for that I've been punished every moment of my life.
He's too weak-minded.
Impulsive.
He's too much like her.
He's too human.
It has been ten years, and regardless of everything I've done to try to change their minds, the Court still speaks of me as if I am unworthy of my birthright. I try to lock away my doubtful thoughts as I watch the Oracle make her way up and down the ranks of Underlords." ―  p.1

THE SHADOW PRINCE you might enjoy Rick Riordan's THE LIGHTNING THIEF and all the other Percy Jackson adventures. If you haven't read these two so far, you could find out if THE GODDESS TEST by Aimée Carter and EVERNEATH by Brodi Ashton are up your alley.

* Have yet to read Bree's THE DARK DIVINE trilogy? Get all three books now!

* Read an excerpt of THE SHADOW PRINCE.

* Want to see Bree in person? Check out her event schedule!

* Visit www.breedespain.com for more information about Bree and her books.

* Thanks to Egmont USA and Edelweiss for prodiving me with an e-galley of THE SHADOW PRINCE!