Book Review: After the End by Amy Plum 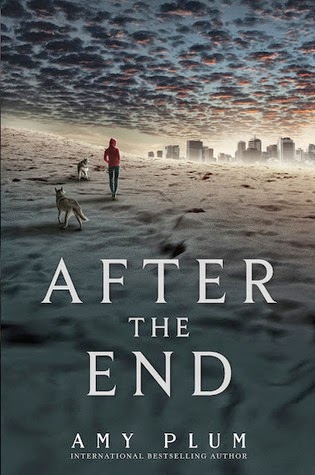 World War III has left the world ravaged by nuclear radiation. A lucky few escaped to the Alaskan wilderness. They've survived for the last thirty years by living off the land, being one with nature, and hiding from whoever else might still be out there.


At least, this is what Juneau has been told her entire life.

When Juneau returns from a hunting trip to discover that everyone in her clan has vanished, she sets off to find them. Leaving the boundaries of their land for the very first time, she learns something horrifying: There never was a war. Cities were never destroyed. The world is intact. Everything was a lie.

Now Juneau is adrift in a modern-day world she never knew existed. But while she's trying to find a way to rescue her friends and family, someone else is looking for her. Someone who knows the extraordinary truth about the secrets of her past.

As a big admirer of Amy Plum's REVENANTS series, AFTER THE END was a definitive must read for me. And Amy's new book is totally different than anything I've read by Amy Plum so far. Juneau's story takes us to the frozen, barren tundra where she lives a very primordial life with her tribe and their animals.

Juneau is this very tough wilderness girl who hunts and can survive anywhere. And she has to prove herself only a few short days later when her tribe is kidnapped by a shady organization. She's so brave and independent that she sets out to save them all, sees big cities like Anchorage and civilization for the first time. How would you feel? Her emotional commotion is something you can understand even if you are no professional caribou hunter who grew up in Alaska. When a character loses something so dear to him or her and sets out to get it back, the story practically tells itself, especially with Amy Plum's exceptionally good writing.

Did you know that AFTER THE END is told from alternating point of views? Juneau you know. And then there's Miles. Miles had me on his side from page one. He's this smug and arrogant rich kid who believes he can get out of everything. He is a character one could dislike but I always want to give such a character the chance to prove himself. And I couldn't wait for Juneau to come along and change him radically. One would absolutely be expecting her to do that, right?
They also go on a kind of road trip, not voluntarily because they are trying to find Juneau's people but they grow closer and make great experiences together. It's just that some parts of their trip were not that captivating because they kept dragging on for some chapters.

The Alaskan setting in the beginning is kick-starting the story like a rocket. I could easily feel myself into Juneau's nature-loving life and wanted to learn everything about their routines and how they believe that they are the only people left after Word War III. There are huskies, too, and they were so adorable, stole my heart right from the start! Reading the summary one could expect a dystopian read but it's more of a contemporary with magical and a few light supernatural influences.

4/5 **** AFTER THE END – A pretty wild first book in a new adventurous trilogy by Amy Plum.

Readers who liked Amy Plum's writing in her REVENANTS series will definitely be into her new series as well. It's spiritual, it has car chases, a big portion of cultural exchange and magical elements. Alternating point of views, a light romance between Juneau and Miles and a beautiful Alaskan setting make AFTER THE END an exciting new release!

"From the cracking of branches to my right, I know that another foe lurks nearby. I can't see the inevitable scars and pockmarks from nuclear fallout, the radiation damage. But it's there. I'll have to take my chances. You have to be tough to survive an apocalypse."

AFTER THE END you might enjoy SHADOW AND BONE by Leigh Bardugo, SNOW LIKE ASHES by Sara Raasch or UNEARTHLY by Cynthia Hand. They don't have exactly the same feel to them but they are all wintry reads with their own qualities like magic and angels.

* Liked AFTER THE END? Then you should read Amy Plum's debut DIE FOR ME!

* Click here to read an excerpt of AFTER THE END!

* Want to meet Amy Plum? Check out her event schedule.

* For more information about Amy Plum and her books visit www.amyplumbooks.com.

* Thanks to Harper Collins International for the chance to review AFTER THE END!
Posted by Miss Page-Turner at 6:51:00 PM