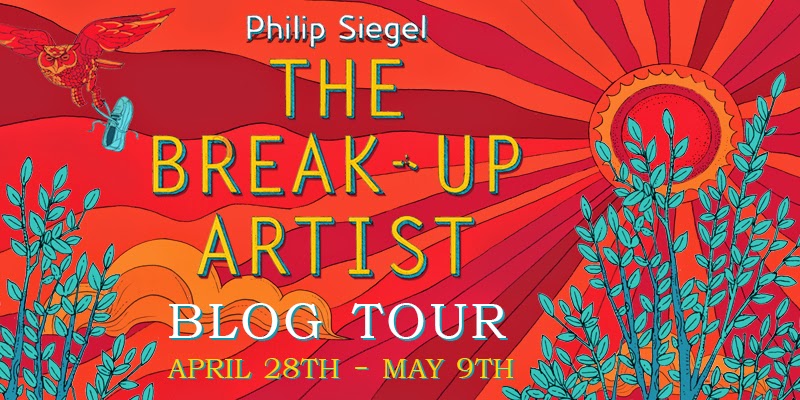 Today I'm very happy to welcome Philip Siegel, 2014 debut author, on the blog. My stop of the THE BREAK-UP ARTIST blog tour features a Q&A with Philip Siegel. He was patient enough and so awesome to answer all the questions I sent his way. Hope you enjoy them. There's also a giveaway (actually more than one)!

Some sixteen-year-olds babysit for extra cash. Some work at the Gap. Becca Williamson breaks up couples.
After watching her sister get left at the altar, Becca knows the true damage that comes when people utter the dreaded L-word. For just $100 via paypal, she can trick and manipulate any couple into smithereens. With relationship zombies overrunning her school, and treating single girls like second class citizens, business is unfortunately booming. Even her best friend Val has resorted to outright lies to snag a boyfriend.
One night, she receives a mysterious offer to break up the homecoming king and queen, the one zombie couple to rule them all: Steve and Huxley. They are a JFK and Jackie O in training, masters of sweeping faux-mantic gestures, but if Becca can split them up, then school will be safe again for singletons. To succeed, she'll have to plan her most elaborate scheme to date and wiggle her way back into her former BFF Huxley’s life – not to mention start a few rumors, sabotage some cell phones, break into a car, and fend off the inappropriate feelings she’s having about Val’s new boyfriend. All while avoiding a past victim out to expose her true identity.
No one said being the Break-Up Artist was easy. 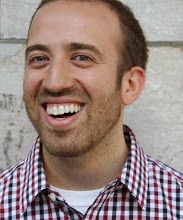 Philip Siegel grew up in New Jersey, which he insists is much nicer than certain TV shows would have you believe. He graduated from Northwestern University and promptly moved out to Los Angeles, where he became an NBC page. He likes to think that the character of Kenneth on 30 Rock is loosely based on his life rights. Currently, he works in downtown Chicago by day while he writes novels at night and during his commute sandwiched in between colorful characters on the El. THE BREAK-UP ARTIST is his first novel.

1) How are you celebrating THE BREAK-UP ARTIST's release date on April 29th?

I think I’ll go around to a few local bookstores and see if my book is on the shelf. And then of course enjoy the surreal moment of seeing MY BOOK in a bookstore. My release party is two days later, which is when I’ll celebrate with friends and cupcakes.

2) Becca Williamson breaks up couples for money. How did you come up with this rather unusual job idea for a high school student?

I’d wanted to do something like the anti-Hitch. We’ve all seen and read stories about matchmakers, but what about people who break up couples? I’d been a bit cynical about relationships growing up; I was always on the outside looking in. Plus, a few years back, I had some friends in bad relationships. In those situations, it’s hard to step in and say something because you don’t want to damage that friendship. It made me wish there was someone who could break up couples for me.

3) What are Becca's top three sneaky methods for breaking up couples? And what was the most hilarious or even awkward moment in her career?

In the book, she hatches a plan to break up this megapopular couple by making the girl think that her boyfriend is falling back in love with his old girlfriend. I loved the slow burn plotting of her scheme. You can’t just throw rumors of an affair in someone’s face. Step by step, Becca makes it seem like the guy is straying, fueling the girl’s paranoia.

Becca’s also broken up a pair of actors by making it seem like they wrote negative reviews of each other’s performances, and for another couple, she spread rumors that the guy was badmouthing the girl’s friends. When writing the book, I realized that break-up schemes couldn’t be forced or too obvious. They needed to be subtle, with time to sink in. She mostly needed to plant seeds of doubt and discontent in her marks’ minds.


4) Becca and Val are best friends, but then Becca suddenly has feelings for Val's boyfriend after spending some time with him. How important is friendship versus love in THE BREAK-UP ARTIST?

One of the big reasons Becca became a break-up artist is because she saw the friendships that were being ruined by relationships. Friends being ditched for boyfriends and girlfriends. Becca believes that love is toxic and that friendships rules, but she realizes that friendship is its own form of love. I really like that Becca does champion the importance of friendship.

5) How much of your original draft made it into the final book? Can you share a deleted scene with us that you really liked but had to cut anyway?

Probably less than 10%. When I think about my original draft, it’s a totally different book. In fact, I had to reread the original synopsis from 3 years ago to refresh my memory. In the original draft, I wrote a scene where Becca’s sister Diane takes her on a road trip to crash her ex-boyfriend’s wedding. It involved leaping out of cars and crying at a gas station. I loved the emotional weight and the dynamic of the sisters in the scene. Becca realized here that she needed to play the big sister for once. I cut the scene because in the end, it was too extreme. Becca’s sister is down in the dumps about being left at the altar, but trying to crash and ruin her ex’s wedding just made her a little too sad and crazy. In future drafts, I shifted her story away from getting back with her ex to reconnecting with her friends.

6) Which recent YA releases can you recommend to readers who are looking for a read just as fun as THE BREAK-UP ARTIST?

My all-time favorite YA novel is THE DUFF by Kody Keplinger. Go ahead and read all her books because they are amazing. For more laughs, you must check out MEANT TO BE by Lauren Morrill and ALSO KNOWN AS by Robin Benway.

7) Can you tell us something about other book projects you are currently working on?

I am working on a follow-up to THE BREAK-UP ARTIST that’ll be out in 2015. I won’t ruin the surprise since there’s a neat little set up for it in the epilogue.

8) Becca and her crush Ezra are talking about movies quite a lot. What are some of your favourite movies? And did you have to do a lot of research or was the extensive movie knowledge something you already had before you began to work on Becca's story?

I am a total movie buff, and I definitely used it as a crutch when writing Ezra. Usually in books, the characters are really into music or sports or some other hobby. I know movies, so it was easy for me to drop references into scenes. I didn’t have to do research; it was all in my head. (I have an uncanny talent of remembering when movies came out and how much they grossed at the box office. Feel free to test me in person.)

I listed out my Top 10 movies in the back of the book, which was agony to pare down, so I’ll mention some of my other favorites: To Die For, Boogie Nights, Network, The Social Network, Don’t Tell Mom the Babysitter’s Dead, The First Wives Club, Six Degrees of Separation, Fargo, Addams Family Values. I’m stopping myself here or else you’ll need a whole ‘nother blog post.

9) Becca's sister Diane gets dumped on her own wedding day and Becca loses all belief in true love. Can you think of anything or anyone that could change her mind?

I think if Becca saw a healthy, loving couple where each person had their own life outside the relationship, she would feel better about love. What bugs her the most is how she’s seen people change for the worse once they get a boyfriend or girlfriend. They stop hanging out with their friends and being themselves.

10) If you could choose anyone to make a guest appearance in THE BREAK-UP ARTIST (film, TV, literary character) who would it be?

Wednesday Addams from Addams Family Values. I think they would get along great!

11) Do you have one place that inspires you or can you write anywhere?

I can, and do, write everywhere. At my desk, on my couch, on a futon in the back room, on the train, at a Starbucks. But my favorite place to write is at the library. It’s quiet, and I’m surrounded by books.

12) Are there any characters in THE BREAK-UP ARTIST who are based on anyone you know in real life?

Yes! When I wrote this book, I needed to think of real people for each of the characters in order to get inside their head and get the voices down. Readers may think the character of Val can be over the top, but she’s very much based on a friend of mine. Some of the things she does, like making charts of potential boyfriends, sending multiple notes that say I NEED A BOY!, hatching schemes to get boyfriends, going after guys who just broke up with their girlfriend, asking Becca for her percentage chance with a guy…well, that all happened verbatim. It just goes to show you that life will forever be stranger than fiction. 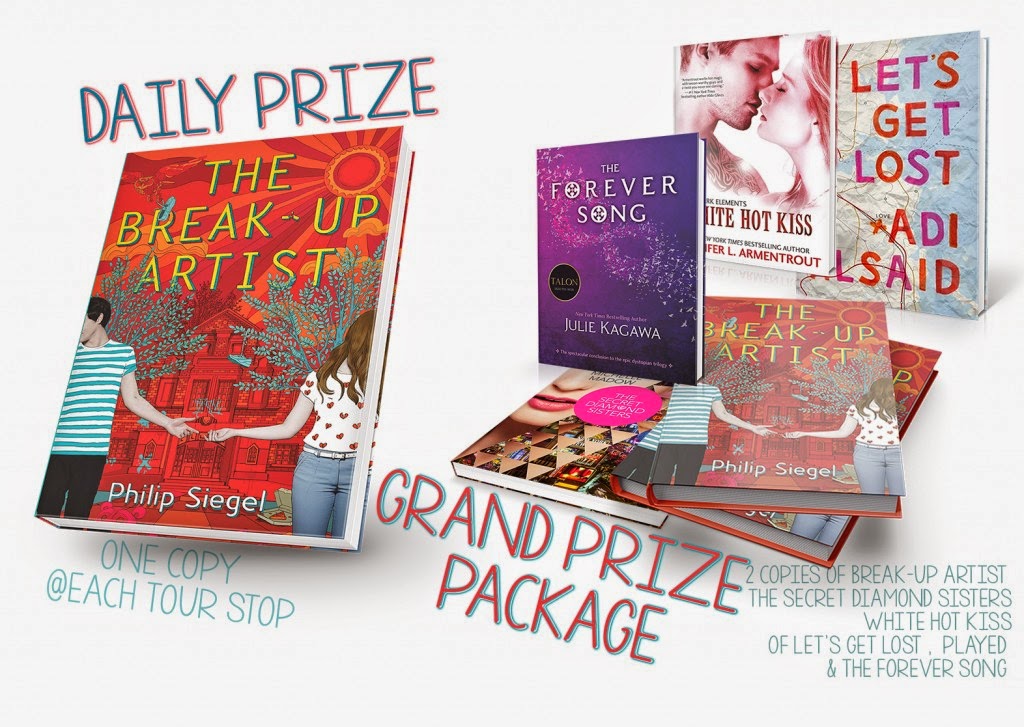 Please enter via the Rafflecopter form. Giveaway is open to US/Canada.

For more information on the THE BREAK-UP ARTIST blog tour visit www.kismetbt.com. Thanks for organizing such a great blog tour!