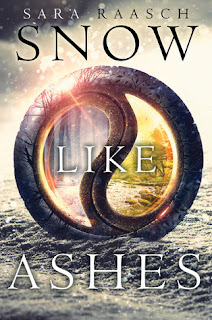 It wasn't only the stunning cover that made me want to read SNOW LIKE ASHES. It was the promise to let my mind wander to an entirely new and enchanting world. I'm also easily hooked by such a love story as we are promised between Meira and Mather.
The entire character cast of SNOW LIKE ASHES is made of awesome. Meira is an orphan girl and she lives the life of a refugee. Still she's optimistic about a brighter future and set on getting back the kingdom of Winter and freeing her enslaved fellow Winterians. The story is told from Meira's point of view and so we get to know her very well, her deepest feelings, thoughts and motivations. Mather is her best friend and Meira has been secretly in love with him (I'm not so secretly in love with him, too). There's only one problem. Mather is the future king of Winter and all the sorrow and hope of an entire kingdom is resting on his shoulders. He's smart, loyal and and a fearless leader. So I'm sure he'll be on many readers' book boyfriend lists!
At this point I have to warn you though, that there's another man in Meira's life who is trying to win her over. So yeah, SNOW LIKE ASHES comes along with a love triangle, which is not my favourite, but definitely doesn't make the story of SNOW LIKE ASHES any less enjoyable.
Meira and Mather's group is made up of eight refugees in total. They are a group of isolated Winterians, and you just can't but love every single one of these peculiar characters and want to get to know them all. As they are the last of their kingdom to be free, to be able to put up resistance against the oppressive Spring tyrant, their group is tightly knit and they are all so brilliantly fierce and dedicated to their goal. In numbers they are weak, but in courage and belief they are very strong. So Meira and Mather's story is also the story about the gigantic feat of a group of eight refugees who fight for themselves, to protect what they love most and together rebuild their kingdom of Winter.

At the beginning of SNOW LIKE ASHES we are provided with a map of Primoria, showing where each kingdom is located. This map really helps navigating the world of Primora and makes it much easier to follow Meira's journey in SNOW LIKE ASHES. A few months ago Sara Raasch shared this exact same map in her featured Behind The Pages post with annotated fun facts. Have a look at the post here.

What fascinated me most about SNOW LIKE ASHES are the eight kingdoms of Primoria that Sara Raasch imagined and so richly brought to life in her captivating debut novel! There are four Season kingdoms and four Rhythm kingdoms. Spring, Summer, Autumn and Winter. Yakim, Paisly, Ventralli and Cordell. Every kingdom has their own king or queen, depending on the bloodline. And these royals are the only ones who can wield magic, brought to them by special conduits. Clever, huh? It is an elaborate and very smart concept that allows for many different and ever new adventurous and smart storylines to spring from it. I just love every single detail about SNOW LIKE ASHES!

5/5 ***** SNOW LIKE ASHES - A phenomenal start to Sara Raasch's magical YA fantasy trilogy!

Sara Raasch is an extraordinarily articulate and imaginative, young, talented author who I hope gets a ton more book deals beside her SNOW LIKE ASHES trilogy. Her world building in SNOW LIKE ASHES is exceptionally beautiful and rich, her characters sincere and so fierce! There is also an ultimate villain and a noble goal to risk everything for. What else is there to be desired?! If you haven't read Sara's debut book I recommend getting a day off so you can delve into her world of Primoria, a world with eight kingdoms, one more fascinating than the other, and spend a time-out of the most fulfilling and bookish kind!

"But he's not just Mather – he is Winter. He will always be Winter first and foremost, and there is a palace in his future, not a cottage.
So I help him over to the fire and hurry to pack what I'll need for the trip, moving and doing in silence because silence is infinitely easier than talking. And now, finally, I'm moving and doing what I've always wanted – helping my kingdom." – p.21

SNOW LIKE ASHES you will enjoy these three fellow YA fantasy stories: SHADOW AND BONE by Leigh Bardugo, THE WINNER'S CURSE by Marie Rutkoski and THE GIRL OF FIRE AND THRONS by Rae Carson. 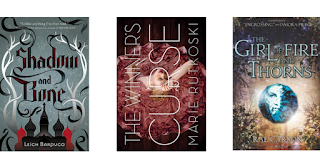 * Have you read ICICLES LIKE KINDLING, the original prologue to the story? You can read it here for free.

* Want to meet Sara Raasch? Check out her event schedule.

* For more information about Sara Raasch and her books visit www.sararaasch.tumblr.com.