Book Review: It’s Not Summer Without You by Jenny Han (Summer #2) 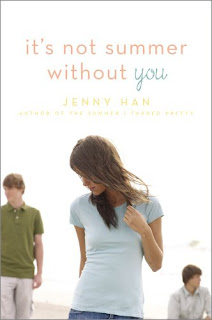 ~ The Author ~
Jenny Han (Han like Han Solo, not Han like hand) was born and raised in Richmond, Virginia. She went to college at the University of North Carolina at Chapel Hill (Go Heels!) and she went to graduate school at the New School in New York City, where she received her MFA in Writing for Children. She lives in Brooklyn and works part-time at a school library on the Upper West Side.
Author profile by www.dearjennyhan.com
For further information visit www.dearjennyhan.com
~ The Novel ~
It’s Not Summer Without You is the second novel in the Summer series published in 2010. The first book in this trilogy is The Summer I Turned Pretty and the third novel, We’ll Always Have Summer will be released in on April 26th 2011.
Other novels by Jenny Han are the children’s books Clara Lee and the Apple Pie Dream and Shug.
~ The Story ~
Can summer be truly summer without Cousins Beach?
It used to be that Belly counted the days until summer, until she was back at Cousins Beach with Conrad and Jeremiah. But not this year. Not after Susannah got sick again and Conrad stopped caring. Everything that was right and good has fallen apart, leaving Belly wishing summer would never come.
But when Jeremiah calls saying Conrad has disappeared, Belly knows what she must do to make things right again. And it can only happen back at the beach house, the three of them together, the way things used to be. If this summer really and truly is the last summer, it should end the way it started--at Cousins Beach.
Summary by Amazon.com
~ The Review ~
It’s Not Summer Without You takes place several months after The Summer I Turned Pretty and that fact already had me engaged, because I so wanted to know what happened right after the first book ended.
Again the story is told from Belly’s point of view who describes her current situation and only gradually reveals what happened after The Summer I Turned Pretty. Jenny Han develops a wonderful balance between present and past events on various levels. And her writing style is just as good and casual as in her first novel in the Summer series.
In It’s Not Summer Without You it’s also Jeremiah’s turn to tell several chapters from his point of view, which gives us deeper insight into his caring and fraternal character.
Belly and Jeremiah often refer to Conrad, who needs to be found after he suddenly left college. Wow, I never dealed with such a difficult literary male protagonist before, when it comes to coping with his emotions and love. Han is a genius, she made me love and at the same time in some way hate Conrad's unstable character. It was so exciting to find out his motives for leaving college so suddenly, it made me understand him a bit more.
The content of It’s Not Summer Without You is engaging, the atmosphere isn’t as relaxed as in book one, more aggressive, depressing and melancholic. The end was horribly wary and heart wrenching and I am glad I didn’t have to wait one whole year for the third book. I started it immediately after I finished this novel.
It’s Not Summer Without You is a fast read thanks to an engaging plot and a casual writing style. Still this is no easy read as this second book in the Summer series is about deep feelings and dealing with great losses.
Just like The Summer I Turned Pretty, I read It’s Not Summer Without You in one day. It totally consumed me.
~ We love this book because… ~
1) we all want a private math tutor
2) we love spontaneous trips
3) cocoa is our specialty
4) of a selfless and persistent demonstrator
5) it’s like a huge game of truth or dare
~ The Verdict ~
It’s Not Summer Without You is a fabulous, sensitive and melancholic sequel to The Summer I Turned Pretty. It’s simply not summer without this book series!
Posted by Miss Page-Turner at 5:48:00 PM