Guest Post: Around the World Book Tips featuring the UK

We all love to read, enjoy numerous different genres and characters that enrich our life every day. What makes our literary world so special is that each country contributes with its own masterpieces to it. Let’s travel around and experience what makes each country’s literature so special, meet new authors and novels and get to know which, for us foreign, books fellow bloggers enjoy.

I hope you enjoy my guest post series "Around the World Book Tips"!

Today Cicely shares her favourite book(s) from her home country the UK with us.
Cicely, who mostly reads YA, started her book blog  in September 2010 because she'd seen other blogs around the web and thought she could do that. Make sure to visit Cicely Loves Books  to see how well she is doing!

Hi guys! First of all, thank you so much Sarah for having me! This is my first guest post ever and I’m so excited! Anyways, I’m here today to talk to you about the lovely books from my home country of England (so exotic, I know  ;p) But I do love British books and I’m really excited about talking to you about them!
Which is your favourite UK book and why? 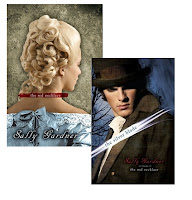 So, my favorite UK book? This could take a while… Probably some of my favorite UK books are The Red Necklace and The Silver Blade by Sally Gardener. Some people really didn’t like these books, but I loved them! The French Revolution, romance, murder, gypsy magic. These books are really great, in fact all of Sally’s books are brilliant! Though I may be biased as I’ve grown up with her books :D 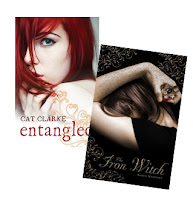 What makes UK literature so special?
British literature… What makes it so special? Well, not really all that much. Perhaps our dry wit? Yes, British humour, such a good thing ;p (Well, I love it anyway… Most of the time) I don’t really think there’s all that much that makes our books special. They’re just Britishy… Maybe I just don’t think that they’re anything special about it because I’m used to them… J (I’m using so many ellipses today… :P)

If you got the chance to write a UK themed novel, what would it be about?
But if I were to write a UK themed book, I would probably write one about Jack the Ripper. The Victorians are probably my favourite of all the British people, and if I could write historical well, then I so would. But I wanted to make Jack a demon or something of the sort, because I think that would make it even more interesting! And then I could have loads of magic in it and it would be soo cool  (and maybe a bit gruesome…)
How would you title it?
If was going to name it, I would probably call it The Red Ripper, just because it sounds cool and I can’t think of anything funny (where’s my British humour gone?! *panics* ;P) *Tries to think of a funny British story idea* *Fails* :D I’d be more than happy to take suggestions ;)

Which other country's book tip are you looking forward to?
One Country whose bookiness I’m looking forward to in this wonderful series of posts (or more than one. I’m very indecisive) is *drumroll* the UK! (Joke, joke. Look, my humour is back! *celebrates*) No, the countries I’m ACTUALLY looking forward to are South Africa, Indonesia, Malaysia. I’ve never even heard of any books from any of these countries before, so it should all be interesting.

Thank you so much Sarah! (And I will thank you again in the comments. I like to say thank you :D) And I look forward greatly to reading the other posts (which won’t be as great as mine, of course! JOKE. I’m sure that they’ll be awesome!)

Thank YOU Cicely! I am a fan of the Victorians aswell and The Iron Witch and Entangled are definitely on my TBR pile!

Want to be part of the post series and featured with your own international book tip? Shoot me an email at goldie-mail(AT)web(DOT)de!
Posted by Miss Page-Turner at 9:42:00 AM