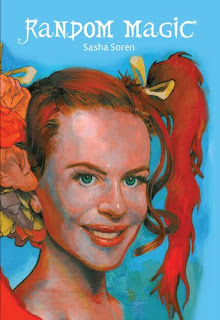 Title: Random Magic
Author: Sasha Soren
Publisher: Beach Books
Publishing Date: 2009
Length: 420 pages
Genre: Fantasy
Source: Sent by author
When absent-minded Professor Random misplaces the main character from Alice in Wonderland, young Henry Witherspoon must book-jump to fetch Alice before chaos theory kicks in and the world vanishes. Along the way he meets Winnie Flapjack, a wit-cracking doodle witch with nothing to her name but a magic feather and a plan. Such as it is. Henry and Winnie brave the Dark Queen, whatwolves, pirates, Struths, and fluttersmoths, Priscilla and Charybdis, obnoxiously cheerful vampires, Baron Samedi, a nine-dimensional cat, and one perpetually inebriated Muse to rescue Alice and save the world by tea time.
Summary by Goodreads

Alice is lost and we are invited to follow Henry and Winnie to find her. On their way they see many new places, come across a lot of new people and paranormal creatures. I didn't like the main characters that much, because they were just weird and didn't make much sense to me. The secondary characters cast is huge, I really liked how varied it were, from wolfs and queens to witches and Muses.
The writing is way too slow paced and detailed. Dialogues are often lacking in content and only included for „further entertainment“. RANDOM MAGIC is also represented by a horrible layout, font and formattig are just not reading friendly.
I have to admit that after a forth of the novel I started skimming RANDOM MAGIC, beacuse the story lost itself in details, many details! Of course I read the pages and paragraphs I noticed were necessary to follow Henry and Winnie's route.
What I really liked about RM was its premise. The idea of a kind of Alice in Wonderland remake and modern take on it. I was so curious how Soren was going to include the single stations of Alice's journey and Lewis Caroll's unique characters.
Another positive aspect about RANDOM MAGIC can be seen in forty pages of bonus material in form of deleted scenes etc., fans will love them!

1,5/5 */* An absolute presentation of the random ideas being born in an author's imagination! 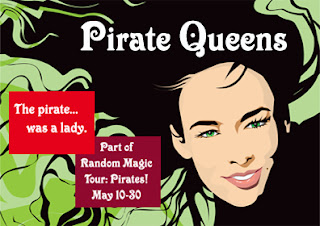 Grace O'Malley, or Gráinne Ní Mháille in Gaelic (Gaeilge), was a 16th century Irish chieftain and pirate. Born in County Mayo, Ireland, Grace was the daughter of sea captain Owen O'Malley (Eoghan Dubhdara Ó Máil), but she was meant to stay ashore and marry a chieftain, while her half-brother made seafaring his profession. Wee Grace, however, persisted. Finally, in a fit of temper after the elder O’Malley refused to take her along on a trading expedition to Spain because she was a girl, young Grace reportedly dressed in boy’s clothing and chopped off all her hair. Her stubborn will impressed Owen O’Malley, and her freshly bald head just made him laugh, earning the miniature spitfire the nickname, Gráinne Mhaol, or Bald Grace.
Her exploits over a long and interesting life could, in fact, fill a book - so here are some quick highlights: 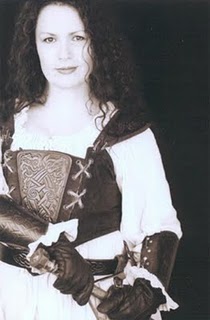 * Returning from a voyage, Grace and her crew landed at a place called Howth. Grace sought the hospitality of the house for herself and her men from the lord of the castle (Howth Castle), a Gaelic custom of long standing. The doors were barred to her, and she was told that the lord was dining and would not be disturbed. Furious at having been refused entrance, Grace simply kidnapped the son and heir of the castle and took him back to Connaught with her.
* Another story that’s become part of the legend of Grace O’Malley is the way she earned the nickname, ‘The Dark Lady of Doona.’Seeing a floundering ship, Grace planned to salvage the stores, but instead discovered a lone survivor called Hugh de Lacy. Grace nursed him back to health and in the process the two fell madly in love. Then Hugh was killed during a deer hunt by the MacMahons of Ballycroy. Grace sailed to the MacMahon family seat of Doona, claimed the family castle for her own and burned their boats - she also tracked down those responsible for Hugh’s death and killed them all.
* Grace was a de facto leader in the various Irish clan rebellions against the expansion of British rule. Ruling English monarch Elizabeth I was necessarily Grace’s enemy, sending a British military administrator who reportedly had Grace’s eldest son killed, turned a second son against Grace, and had her youngest son imprisoned. Despite the then quite natural enmity these two powerful woman shared, Grace’s life story apparently fascinated the English monarch - ultimately the English queen accepted the request of the pirate queen to a private audience in 1593, agreeing on an informal truce. The truce was brief, but the meeting was notable for its rarity and the meeting of two of the late 16th century’s most unusual women. Both Elizabeth I and Grace O’Malley also reportedly died in the same year, 1603. Grace reportedly died at her own Rockfleet Castle and local legend had it that her bones were interred in an unmarked crypt in the chapel of an abbey on Clare Island, near Belclare Castle, where she was born - although her final resting place has never been found.
Pirate captain and stalwart rebel Grace O’Malley is a famous figure in Irish popular culture, and hundreds of stories have been written about her, places named after her, songs sung about her. Ironically, she was nearly written out of history by Irish historians, who deemed her behavior beyond the pale for a woman in any age, let alone the medieval ages.
As writer and lecturer Anne Chambers notes, ‘The Annals of the Four Masters, that source of Irish history compiled a few years after her death and in a place where memories of her activities were still verdant, do not even mention her name. The English State Papers, on the other hand, contain references to her as late as 1627 - some twenty-four years after her death.'So, how then did later centuries uncover the story of Grace O’Malley? Because of the many complaints and anecdotes about her, carried home in military missives - by her enemies. Among the creative works of art inspired by the story of pirate queen Grace O’Malley is a one-woman play, written by and performed by actor Molly Lyons, called A Most Notorious Woman.
~ Tour Stops May 19th ~
May 19
vvb32
http://vvb32reads.blogspot.com/
Twitter: @vvb32reads
http://twitter.com/vvb32reads
Feature: Music: Takes on pirate tunes
Feature: Pirate Queens: #6 of 10: Awilda 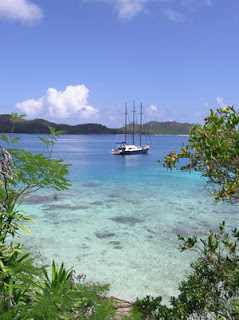 Thanks for stopping by, hope you enjoyed reading! Here's another
interesting tour feature: The Treaure Hunt
* Thanks to Sasha Soren for providing a review copy of RANDOM MAGIC, sending such a cool package and organising and writing such a nice blog tour inclusive feature texts!
Posted by Miss Page-Turner at 3:07:00 PM