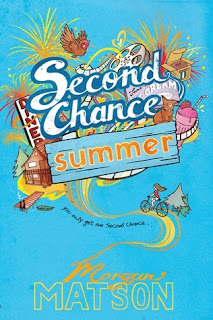 Taylor Edwards’ family might not be the closest-knit—everyone is a little too busy and overscheduled—but for the most part, they get along just fine. Then Taylor’s dad gets devastating news, and her parents decide that the family will spend one last summer all together at their old lake house in the Pocono Mountains.
Crammed into a place much smaller and more rustic than they are used to, they begin to get to know each other again. And Taylor discovers that the people she thought she had left behind haven’t actually gone anywhere. Her former best friend is still around, as is her first boyfriend…and he’s much cuter at seventeen than he was at twelve.
As the summer progresses and the Edwards become more of a family, they’re more aware than ever that they’re battling a ticking clock. Sometimes, though, there is just enough time to get a second chance—with family, with friends, and with love.

Morgan Matson. A name that makes my ears perk up when it comes to talking books. The moment I hear about a new book by Morgan, I'm craving it already. That's because her stories make fantastic summer reads. But not only such that feel nice or easy. I appreciate summer reads that not only create a light and relaxed summery setting. Morgan's stories always offer a nutritious environment and a well-deserved but hard worked for chance for characters to grow, to deal with the heavy things, with emotional disturbances.

In SECOND CHANCE SUMMER Morgan Matson tells the story of Taylor Edwards, whose family decides to return to their lake house after years. Some time has passed since Taylor's spent time at the lake with her old friends and there's still something of her past that she's afraid to face.

I immediately felt welcome to spend the summer with Taylor's family in their cabin. It's the first time her sister gets to visit the lake and make her very own experiences, finding new friends and simply having a blast. Taylor's brother is the funniest out of the five, always good for a crazy and funny surprise. Her parents are truly wonderful, always there for their children. I had a soft spot especially for Taylor's father, who is the best dad for his children one can think of.
SECOND CHANCE SUMMER wouldn't be the successful summer read it is if there wasn't also a sad side to the story. In the midst of the most important and wonderful summer of their life the family is hit by a stroke of fate and they have to find a way to bring back their ways that started growing apart.

The relationship between Taylor Edwards and childhood friend Henry is what kept me reading for hours. My mind was set on finding out what happened in their past and if they were able to find a way to come back together again now that they're more grown up. There are still a lot of confusional emotions swirling between them, but there's also a spark of hope that they are exaclty the right people to help each other in times of loss and hardships.
Returning to the cabin, Taylor must also face her former best girl friend and try to restore a friendship that she thought of as long lost.

SECOND CHANCE SUMMER is majorly about friendship, love and family. Although the story presents us with several conflicts, the drama doesn't seem all too present or overdone. Morgan finds exactly the right way to tell Taylor's story about her second chance and what she's doing with it when her world appears to be breaking apart.  The motive of a second chance is huge in Morgan's second book. I just couldn't read it without spilling a few tears.

Do you know that comfortable fuzzy feeling a stunning and surprising book fills you with? SECOND CHANCE SUMMER left me with exactly this kind of feeling. It felt like Morgan Matson enclosed me into a comforting hug with every single new page, so warm and welcome did I feel in her story.

SECOND CHANCE SUMMER is filled to the brim with all the things summer: love, friends, family, sweet kisses, riding your bikes, ice cream, days at the lake, summer jobbing and the vast and wistful feeling that comes with each passing day of summer.

* Have a look inside SECOND CHANCE SUMMER.

* For more information about Morgan and her books visit www.morganmatson.com

* Thanks to Simon & Schuster UK for sending me a copy of SECOND CHANCE SUMMER for review!