It's here! The first trailer  of RUBY RED, movie adaptation based on the book by Kerstin Gier. It's in German since Kerstin Gier's from Germany and the movie is produced there aswell. Have a look at Gideon & Gwyneth! Click on the picture to watch the trailer! 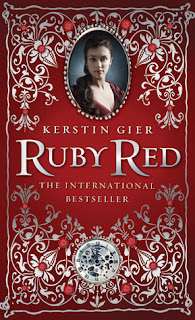 Gwyneth Shepherd's sophisticated, beautiful cousin Charlotte has been prepared her entire life for traveling through time. But unexpectedly, it is Gwyneth, who in the middle of class takes a sudden spin to a different era!
Gwyneth must now unearth the mystery of why her mother would lie about her birth date to ward off suspicion about her ability, brush up on her history, and work with Gideon--the time traveler from a similarly gifted family that passes the gene through its male line, and whose presence becomes, in time, less insufferable and more essential. Together, Gwyneth and Gideon journey through time to discover who, in the 18th century and in contemporary London, they can trust.