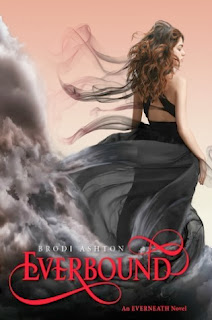 
Nikki Beckett could only watch as her boyfriend, Jack, sacrificed himself to save her, taking her place in the Tunnels of the Everneath for eternity — a debt that should’ve been hers. She’s living a borrowed life, and she doesn’t know what to do with the guilt. And every night Jack appears in her dreams, lost and confused and wasting away.

Desperate for answers, Nikki turns to Cole, the immortal bad boy who wants to make her his queen — and the one person least likely to help. But his heart has been touched by everything about Nikki, and he agrees to assist her in the only way he can: by taking her to the Everneath himself.

Nikki and Cole descend into the Everneath, only to discover that their journey will be more difficult than they’d anticipated — and more deadly. But Nikki vows to stop at nothing to save Jack — even if it means making an incredible sacrifice of her own.

Reading EVERBOUND over one year after I read EVERNEATH made me realize how much I missed Nikki and Jack and all the other characters. It was even good to see Cole again (only on a level where I appreciated his puns and comebacks, not in the romance category).
EVERNEATH ended with a major cliffhanger and I remember being so upset about Nikki and Jack being separated in the end. They are one of my YA dream couples, best friends who discovered their romantic feelings for each other and a couple with a meaningful and eventful past. It was an unavoidable urge to see Nikki and Jack be reunited again in EVERBOUND.

In order to save Jack we are going back to the Everneath, which was a very well thought-out place, holding many secrets and obstacles to make Nikki's quest so much harder and a treat for fans of puzzles and solving riddles like me. I adore marathon-like quests with many episodes and different levels to test our hero's strength and his willingness to reach his goal. These kind of quests provide YA stories with an action-feel that can't compete with any big blockbusters seen on the big screen.

Nikki, Cole and his friend Max have to pass through different rings of the Everneath, a maze-like structure with elemental obstacles. Nikki has to fight the powers water, wind and fire to reach her Jack. Brodi Ashton thought of so many thrilling twists and turns to the story that I couldn't put the book down for too long. She knows how to lure her readers in, make them trust her and then make the ending another cliffhanger. Well played!

Alternating with chapters set during the Everneath quest, Brodi Ashton gifted us with flashbacks to moments from Nikki and Jack's shared past. How they weren't sure if loving the other would be the best option for their friendship or how to test if the other felt the same. And we read about their first kiss, too. Reading about all those details and extra scenes that didn't make it into the first book was like an early Christmas present. So damn well-written and addictive.

Again Brodi Ashton included a few myths in the story. Nikki is obsessed with them and mainly concentrates on the famous Minotaur myth. EVERBOUND has less on the Daughters of Persephone than the first book and the myth retelling/story balance actually improved from the first book to this sequel.

5/5 ***** EVERBOUND - A hellishly exciting quest about saving your one true love, with exhilarating elemental goodness and the right balance between action, romance and humor.

Myths, old love stories and new romances, a quest, an elemental maze and an evil underworld queen to fight.  What else would an ambitious YA reader need for a perfectly alluring sequel. One of the best sequels that I've read!

"I see Jack every night. In my dreams.
He's lying next to me. Parallel worlds ― the Surface for me, the tunnels of the Everneath for him ― that overlap at this one spot, and only for a moment. In my bedroom, while I dream." ― p.3

EVERBOUND you might also enjoy THE ALCHEMY OF FOREVER by Avery Williams, DIE FOR ME by Amy Plum and SWEET EVIL by Wendy Higgins. They are all equally seductive and appealing and the first two are playing with different concepts of immortality and afterlife.

* Can't get enough of the Everneath? Then you should read the NEVERFALL novella.

* Read an excerpt of EVERBOUND here.

* For more information about Brodi and her books visit www.brodiashton.blogspot.com