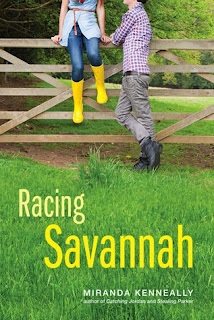 He lives in the estate house, and she spends most of her time in the stables helping her father train horses. In fact, Savannah has always been much more comfortable around horses than boys. Especially boys like Jack Goodwin—cocky, popular and completely out of her league. She knows the rules: no mixing between the staff and the Goodwin family. But Jack has no such boundaries.

With her dream of becoming a horse jockey, Savannah isn’t exactly one to follow the rules either. She’s not going to let someone tell her a girl isn’t tough enough to race. Sure, it’s dangerous. Then again, so is dating Jack…

Do you sometimes feel like you are attending Hundred Oaks High, too? I wouldn't blame you. That's because Miranda Kenneally's books always feel like home, and her characters like your best friends. When I read a RACING SAVANNAH excerpt months ago I was so desperate to get my hands on a copy as soon as possible (Miranda had me with the promise of spending some quality time with a bunch of puppies) and was lucky enough to snatch an ARC at Frankfurt Book Fair.

Miranda's fourth book in the HUNDRED OAKS series has everything for animal lovers. I'm just like Savannah, whenever I see a cute animal I can't resist to cuddle it and immediately want us to be friends. The horse racing was a different kind of sport than the other HUNDRED OAKS books featured. It was interesting in the aspect of exploring the bond between animal and human. You need to be professional and disciplined, but you have to be friends, too to win the race. Some parts of the story solely concentrate on Savannah's training with Star and her friendship with the horses. I'm not the biggest fan of horses and was surprised that Miranda picked this sport for her fourth book (glad she did). I learned a lot about horse racing, what it takes to be a respected jockey and had so much fun following Savannah's training. I would love to go see a real horse race some time.

RACING SAVANNAH is as much about the big race with Star as it is about family and romance. Savannah and Jack are just like Miranda's other couples. You have to love and root for them from the very beginning to the ending and beyond.
From the first scene they had together, I knew they would make for an adorable couple. Savannah and Jack's romance is influenced by their difference in money and class and the worries about their parents not approving of their feelings for each other. The romantic scenes are as hot as usual, steamy and equally gentle and swoon-worthy. They both have strong tempers and some of their quarrels and misunderstandings didn't feel like they were leading anywhere. I wished they would have found to each other much sooner, but I'm sure Miranda will consider the needs of her readers for more of them in her future stories.
Savannah and Jack are a good team and I definitely want to see them again, in bed, on the racetrack and mucking out the the boxes, doesn't matter.

The stories of Miranda's other characters from her three previous books are continued in RACING SAVANNAH as well. This is always my favourite part about Miranda's books. We don't have to part with our beloved book friends. Rory, Will's brother from STEALING PARKER makes occasional appearances, too. So Will and Parker fans are definitely in for a great treat here.
I'm always anticipating Miranda's next book while reading her current release. Her HUNDRED OAKS companions are absolute feel-good novels!

4/5 **** RACING SAVANNAH – A naturally funny and sportive read lightening this cold December with country flair, the smell of fresh hay and sunny days spent on the racetrack.

RACING SAVANNAH is your lucky horse shoe in YA, meaning it won't disappoint and will get you out of every reading slump. It's every YA readers' sugar. This book will make you whinny. Ok, enough with the horse references. Seriously, this book is my December highlight! Who could say no to an entire farm of horses, puppies and a cute boy?

"No, no," I say, starting to explain, but then he unleashes his megawatt smile. It makes my throat close up and my heart pounds even harder. This guy is hot, but I don’t like boys who get whatever they want without trying. I worked damned hard to get my part-time exercise rider job back in Charles Town. Just like I’ll work damned hard to get a position here.
"Soo…" Jack says, stroking the bay stallion’s mane. "Do you want a private tour? You know, to say thanks for catching my horse?" ― p.5

RACING SAVANNAH you might also enjoy THE DISTANCE BETWEEN US by Kasie West and SUCH A RUSH by Jennifer Echols. They are about two couples who struggle with their differences in status and income. WILD CARDS by Simone Elkeles is a sporty read as well, we are playing football.

* If you haven't read Miranda's previous books here's exactly what you need, the MIRANANDA KENNEALLY BUNDLE for your Kindle with Catching Jordan, Stealing Parker and Things I Can't Forget.

* Read an excerpt of RACING SAVANNAH by Miranda Kenneally here.

* For more information about Miranda and her books visit www.mirandakenneally.com.

* Thanks to Sourcebooks Fire for providing me with an ARC of RACING SAVANNAH at Frankfurt Book Fair!