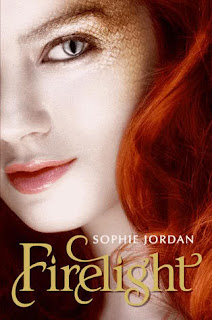 ~ The Author ~
Sophie Jordan took her adolescent daydreaming one step further and penned her first historical romance in the back of her high school Spanish class. This passion led her to pursue a degree in English and History.

A brief stint in law school taught her that case law was not nearly as interesting as literature - teaching English seemed the natural recourse. After several years teaching high school students to love Antigone, Sophie resigned with the birth of her first child and decided it was time to pursue the long-held dream of writing.

In less than three years, her first book, Once Upon A Wedding Night, a 2006 Romantic Times Reviewers' Choice Nominee for Best First Historical, hit book shelves. Her second novel, Too Wicked To Tame, released in March 2007 with a bang, landing on the USA Today Bestseller's List.
Author profile by Goodreads
Don’t forget to visit http://www.sophiejordan.net/
~ The Novel ~
Firelight is the first novel in the Firelight series and was first released in September 2010. It’s sequel Vanish will be released September 2011.
~ The Story ~
A hidden truth.
Mortal enemies.
Doomed love.


Marked as special at an early age, Jacinda knows her every move is watched. But she longs for freedom to make her own choices. When she breaks the most sacred tenet among her kind, she nearly pays with her life. Until a beautiful stranger saves her. A stranger who was sent to hunt those like her. For Jacinda is a draki—a descendant of dragons whose greatest defense is her secret ability to shift into human form.
Forced to flee into the mortal world with her family, Jacinda struggles to adapt to her new surroundings. The only bright light is Will. Gorgeous, elusive Will who stirs her inner draki to life. Although she is irresistibly drawn to him, Jacinda knows Will's dark secret: He and his family are hunters. She should avoid him at all costs. But her inner draki is slowly slipping away—if it dies she will be left as a human forever. She'll do anything to prevent that. Even if it means getting closer to her most dangerous enemy.
Summary by Goodreads
~ The Review ~
I never paid much attention to dragons or dragon-like creatures, only detected them as secondary characters, until Firelight. Jordan introduces the species of draki, the dragon at heart, human on the outside. The very different types of draki fascinate me, from water to fire, onyx and many more. Jordan’s got a detailed writing style, still I couldn’t properly imagine how a draki really looks like.
Jacinda, our protagonist has got a twin who plays an interesting role. They’ve known each other for their whole lives, have been friends till the time one of them changed and the other didn’t.
Sophie Jordan invented many different characters, drakis, humans and dragon hunters. So we can explore a wide network of relationships and have to expect many variations and interactions in Firelight’s sequel.
A love story emerges between prey and Will, the  predator, it’s sweet and dangerous at the same time. We got many kisses, many planned or coincidental meetings just the way I like them.
Annoying about Jacinda is her way of arguing. She revised the same reasoning why she can or can’t be near Will felt one thousand times. It’s her nature as a draki that makes me like her, but her character is not the most appealing. The only aspect that makes me want to be Jacinda is her connection to Will, who is adorable.
Will is supposed to fight drakis and with that fight what Jacinda truly is. At the same time he, as the most dangerous possible threat, prevents her spirit from dying. What’s new to this novel is that her supposed enemy revives Jacinda while her family, the ones who are supposed to protect and accept her the way she is, wants her draki to die. Jordan reverses the roles of enemy and family which is very uncommon and adds one more conflict to the great list of possible threats and struggles.
Although Firelight felt like only an average read, its end drew me in and left me hanging. I really want to know how Jacinda’s story continues and how Jordan intends to solve the overall conflict between drakis and dragon hunters. Hope I can get my hands on a Vanish copy soon.
~ We love this book because...~
1) we wouldn’t mind having our own gem filled box
2) of a heroine with fiery personality
3) the most beautiful things are hidden
4) love has the power to keep our spirit alive
5) of a sexy male character cast
~ The Verdict ~
I recommend Firelight to every fantasy fan. This novel is represented by a solid writing and expandable character portraits. It convinces with the story around Jacinda and Will, the mythical creature of dragons and a forbidden love story.
~ Many thanks to Oxford Children's & Education for sending me a finished copy of Firelight for review!
Posted by Miss Page-Turner at 12:45:00 PM