"Rubinrot", "Saphirblau" and " Smaragdgrün" are the three novels that make up the "Liebe geht durch alle Zeiten" series by Kerstin Gier. You never heard of that before? That's not a real big surprise because this series is written by a German author. I really suggest you pick it up, because it is really good! And no, that you do not understand a single word German is not a reason for not picking it up. The first novel in this series was translated into English and will be released May 2011! Let it be part of your 2011 Debut Author Challenge! 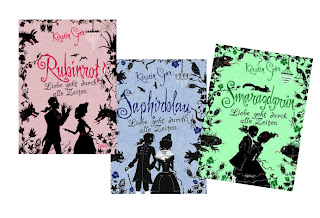 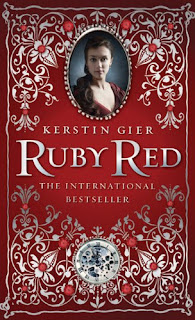 Ruby Red by Kerstin Gier
Gwyneth Shepherd's sophisticated, beautiful cousin Charlotte has been prepared her entire life for traveling through time. But unexpectedly, it is Gwyneth, who in the middle of class takes a sudden spin to a different era! Gwyneth must now unearth the mystery of why her mother would lie about her birth date to ward off suspicion about her ability, brush up on her history, and work with Gideon, the time traveler from a similarly gifted family that passes the gene through its male line, and whose presence becomes, in time, less insufferable and more essential. Together, Gwyneth and Gideon journey through time to discover who, in the 18th century and in contemporary London, they can trust.
Summary by Goodreads 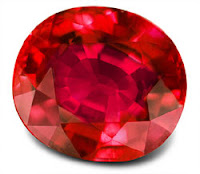 The ruby is considered to be the most powerful gem in the universe, and is associated with many astral signs. To own a ruby is said to have contentment and peace. Placed under a pillow the ruby may ward off bad dreams. Ruby rings should be worn on the left hand so as to receive the life force and have protection. Given as a gift, the ruby is a symbol of friendship and love. The ruby is also the symbol of vitality and royalty.
Info by www.crystal-cure.com
~ Here are 3 reasons to pick Ruby Red as one of your reads in 2011
1) it involves time travelling
2) one character is a  gargoyle
3) love it not bound to one special time