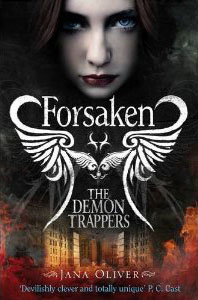 Seventeen-year-old Riley, the only daughter of legendary Demon Trapper, Paul Blackthorne, has always dreamed of following in her father's footsteps.  The good news is, with human society seriously disrupted by economic upheaval and Lucifer increasing the number of demons in all major cities, Atlanta’s local Trappers’ Guild needs all the help they can get – even from a girl. When she’s not keeping up with her homework or trying to manage her growing crush on fellow apprentice, Simon, Riley’s out saving distressed citizens from foul-mouthed little devils – Grade One Hellspawn only, of course, per the strict rules of the Guild. Life’s about as normal as can be for the average demon-trapping teen.

But then a Grade Five Geo-Fiend crashes Riley’s routine assignment at a library, jeopardizing her life and her chosen livelihood.  And, as if that wasn’t bad enough, sudden tragedy strikes the Trappers’ Guild, spinning Riley down a more dangerous path than she ever could have imagined. As her whole world crashes down around her, who can Riley trust with her heart – and her life?
Summary by Goodreads

Since my favourite book is about fighting demons, I couldn’t wait to read this new demon themed novel. I started FORSAKEN three times and never got beyond chapter one. I have no idea why exactly we had such a slow start, because in the end I liked FORSAKEN.
The story is set in a poor and run-down Atlanta 2018. Money is tight and many people have to make their living by trapping and selling demons. Now is the time for our heroine, Riley, to enter this hellish business. In an all male world she has to proof she’s as strong and skilled as her male colleagues. And it was cool to follow her on her way to become a trapper with all its difficulties and deprivations.
Remarkable about FORSAKEN is the accumulation of male protagonists and possible matches for Riley. There’s Simon and Beck, both demon trappers, her best friend Peter and the mysterious Ori. I already have my favourite match, it wasn’t difficult to like him. But everything about Riley’s feelings is still so undefined that I am curious about the developments in her love life in FORBIDDEN. The story is told from Riley and Beck’s point of view and rather slow-paced. Writing and characters aren’t extraordinary, but solid.
This first novel in the THE DEMON TRAPPER series is all about Riley and her way to become a respected member of the demon trapper guild. I liked FORSAKEN but hope for more action and romance in book two.
Jana Oliver invented an original organisation for the business of demon trapping. Their equipment and various types of demons make FORSAKEN an authentic read. Interesting is that Oliver associated a religious background with the business of demon trapping. Hunters and trappers work together with the Vatican.
I am already curious in which direction the whole story around demons, the Vatican and an ominous conspiracy is heading!

3,5/5 ***/* FORSAKEN- Tough characters and creepy demons offer material for a new exciting fantasy series!
With a bit more action and romance in book two this series could easily become one of my favourite demon themed series! 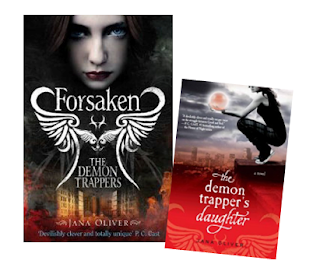 *FORSAKEN (UK) is also known as THE DEMON TRAPPER’S DAUGHTER (US)
* You can read an excerpt of FORSAKEN here!
* Make sure to visit www.janaoliver.com
* Thanks to Pan Macmillan for sending me FORSAKEN for review!

* Let’s wait for the second THE DEMON TRAPPERS novel: FORBIDDEN
Posted by Miss Page-Turner at 5:19:00 PM