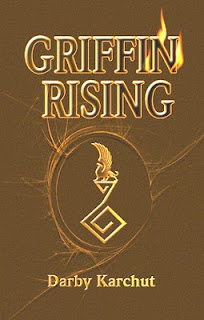 Title: Griffin Rising
Author: Darby Karchut
Publisher: Twilight Times Books
Publishing Date: June 28th 2011
Length: 176 pages
Genre:YA, fantasy
Source: Received from author
Griffin Rising is an urban fantasy about an apprentice angel and his coming of age under the tutelage of a father-like mentor. As one of the mysterious Terrae Angeli, Griffin secretly navigates life among humans while preparing for the trial-by-combat every apprentice must pass or become mortal.
Summary by Goodreads

Despite its horribly plain cover, the story around Tiro and aspiring angel Griffin and his mentor is surprisingly good. Karchut invented an interesting angel story. Her concept of guardian angels is integrated into our human world. It circles around the character Griffin and follows his way of training and becoming a Terrae Angeli.Griffin is a friendly and casual character so that it was very easy to like him. His mentor Basel has the status of a father figure, he is protective of his student and is just as likeable as Griffin.

We got passages that are told from an omniscient narrator with reocurring excerpts of diary entries by Griffin, Basil and the femal protagonist Katie. And because these are supplemented by the actual  date, the reader gets a deeper knowledge of time and space and the possibility of following the course of actions and get a better feeling for the training process.

Karchut doesn't involve many characters. As the title suggests, this novel is about our main character Griffin and his training to become a successful part of the angel community. In this case it's in the story's character- with the journal, a very personal aspect and the concentration on our main charater Griffin- to only feature very few characters, so I can somehow accept that.

GRIFFIN RISING is a rather short and quick read.Scenes can be divided in the daily training of a future Terrae Angeli and the blooming relationship between Griffin and the new girl who moved in across the street. War and love are balanced equally.

What I really like about this novel is that Karchut offers bonus material in form of the ancient myths around angels and the information how she developed the plot and which elements show connections to believes and religious, historical or cultural influences.

I enjoyed GRIFFIN RISING and will definitely read its sequel after this unexpected ending!

1) of an awesome mentor that couldn't care more
2) of a tiro that deserves more than one chance
3) we get to read not parts of one, but three journals
4) we enjoy following the training of an aspiring angel
5) of  its elemental power

3,5/5 ***/* GRIFFIN RISING- An angelic apprenticeship, combined with fights, kisses and a ton of elemental awesomeness. Give that Tiro a try!
With her debut novel, GRIFFIN RISING,  debut author Darby Karchut shows that books published by smaller publishers should get an equal chance to find a place on your bookshelves. Include it in your Debut Author Challenge 2011!

* You can read the first chapter of  GRIFFIN RISING here!

* Make sure to visit www.darbykarchut.com

* Thanks to Darby Karchut for sending me GRIFFIN RISING for review!