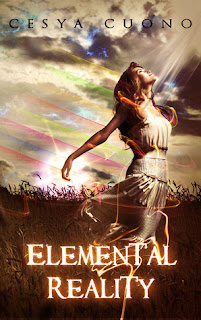 When Callie Pierce was ten, her mother disappeared without a trace. On the eve of her disappearance twelve years later, the earth seemingly comes alive. The elements speak to Callie, and that's only the beginning. Everything she has ever known was a twisted fabrication to protect her. Now the truth is set free. Callie and her sister are more powerful than any Faerie ever born. Now they have to use their powers to save their mother and family from the evil hands of fate that threaten to tear them apart. Welcome to her elemental reality.

I was so happy when Jennifer asked me to be part of the ELEMENTAL REALITY blog tour, because I’ve been wanting to read this novel since the first time I read about it being published.

Callie is a protagonist I really liked. She is straight-forward, tough and at the same times cares so much about the people surrounding her. The male protagonist is Oli, a hottie with Aussie slang that you simply must fall in love with.

In addition we get to read more about Callie’s family, including her sister Lola, their parents and the secret around the girls’ heritage. And that secret is really exciting and exactly what made me want to read ELEMENTAL REALITY in the first place.

Callie has some special powers and I really enjoyed her discovering and actually using them for good. She can control the elements. Fire, water, earth, wind and electricity. Describing the way Callie’s body reacts to different elements was well done, I imagined so many different sensations while reading it.

At the beginning I thought the girl was involved with different guys way too fast, but that was only the result of them playing their magic. There is a dark and light magic and you should find out yourselves about the magical beings behind.

Cesya MaRae Cuono also involved the concept of a paranormal being that I’m not too fond of and it was a surprise to me to find out what Callie actually is. To me the story would have worked much better if the special elemental powers were the only paranormal aspect about her.

Callie’s mom went missing years ago and now the group around Callie and Oli’s family goes on a search for her, which promised to be exciting. In the end I was a bit disappointed, because their journey and adventures didn’t feel epic in the end but rushed. The story sometimes felt as if someone was pressing the fast forward button on a remote control. I wished for a more relaxed pace and more time for the girls to discover their new heritage.

The writing style was engaging and the whole story and atmosphere felt good to me. The author has a great humour and often achieved to bring amusement to the story. So I’ll definitely read the sequel to ELEMENTAL REALITY, I’m already curious about the next chapters in Callie and Oli’s love story and the fight against evil.

Where I want other novels to be more fast paced and feature some action, ELEMENTAL REALITY sometimes needs to slow down a bit. Still I really liked the characters and the concepts of love and elemental powers Cesya MaRae Cuono invented. 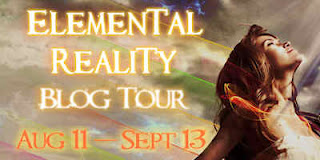 * Don’t forgot to visit the next tour hosts:

* Thanks to Revolution Publishing for offering me ELEMENTAL REALITY for review and making it possibly to be part of the blog tour!