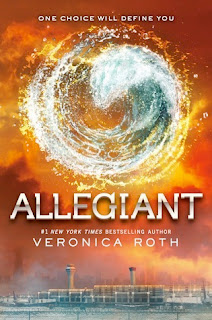 One choice will define you.

What if your whole world was a lie?
What if a single revelation—like a single choice—changed everything?
What if love and loyalty made you do things you never expected?

The faction-based society that Tris Prior once believed in is shattered—fractured by violence and power struggles and scarred by loss and betrayal. So when offered a chance to explore the world past the limits she’s known, Tris is ready. Perhaps beyond the fence, she and Tobias will find a simple new life together, free from complicated lies, tangled loyalties, and painful memories.

But Tris’s new reality is even more alarming than the one she left behind. Old discoveries are quickly rendered meaningless. Explosive new truths change the hearts of those she loves. And once again, Tris must battle to comprehend the complexities of human nature—and of herself—while facing impossible choices about courage, allegiance, sacrifice, and love.

I expected the day ALLEGIANT was released to be the day that would part the YA readership. Excessively enthusiastic readers on one side, shattered or even enraged readers on the other. And then my first reaction: perplexity. I just didn't know what to make of ALLEGIANT. Well, at least it made me think. A lot. In the days following the end of the DIVERGENT trilogy I caught myself drifting back to the story of Tris and Four and the other ALLEGIANT characters and reassessing its ending more than once. It was shocking but brave. Encouraging but devastating. I'd never been so torn about a book rating

After the cliffhanger we were presented with in INSURGENT, a profound background to Veronica Roth's faction world was demanded. And Veronica Roth did everything to supply her readers with theories, information and answers. But at some point, I had a feeling that anything in the story needed a long explanation, turning the third book more into a social or behavioral study than the adrenaline-rush-inducing rollercoaster ride that was DIVERGENT and INSURGENT.
It was a massive mission to wrap up a story and a world such as the one we were presented with in DIVERGENT, a very complex world.
What is power and who wields it? Where can you find the truth in a world controlled by lies? Is humanity still existent and what do Tris and Four have to do to retrieve it?

ALLEGIANT is written from the alternating perspectives of Tris and Four. SO GOOD, I tell you. Both perspectives were dynamic and insightful, complementing the other just naturally. As Veronica Roth so fitly described them in an interview with BuzzFeed:


Tris and Four even out their weaknesses and underline their strenghts. They are nowhere near a perfect couple. They have flaws and make mistakes, the important part is, that they are both very aware of them and they openly show and consciously reflect them.  The moments they got to show their closeness made me adore Four and them both as a couple even more, but somehow those moments felt bittersweet with all the difficulties that still lay ahead of them.
No matter what, Tobias, you make readers fall in love with you over and over again. In DIVERGENT, INSURGENT, ALLEGIANT and every future re-read.

There was a time in the book when things started to fall back into an old pattern. People gathering and planning an uproar. I'm not saying that a world as the one Tris and Four are living in doesn't need those people. Active and intelligent people who see the needs of those who can't stand up for themselves. But by the end of the DIVERGENT series it seemed like I'd seen so many different groups of variously motivated people that Tris and Four always get involved with, it was too much and often only caused a lot of relationship drama.

I'm not giving less than five stars because the story didn't end the way I wanted it to end. I thought a lot about that ending of ALLEGIANT and what Veronica Roth must have imagined and aimed at while thinking it out and writing it.
I can't exactly say what the last third of Allegiant felt like. It was a mass of emotions, mostly a combination between consternation and awe. Initial thoughts after finishing ALLEGIANT were: Why did I ever pick up this series? and Why do I do this to myself? Obviously, I didn't mean them.
At the end of ALLEGIANT we were left with a solution to the big conflict that had been brewing in DIVERGENT and INSURGENT and inevitably a mass of inconceivably sudden and tragic losses, yet not without a note of hope. And hope is all there has to be in the end. The ending wasn't what I expected...at all! But it was the ending that made ALLEGIANT a so much better read in the aftermath.

4,5/5 ****/* ALLEGIANT – A revolutionary, brave read, not missing out in the heartbreak department, that slams into you like a train on full speed. Veronica Roth doesn't hold back.

ALLEGIANT aka the book that should be named HEARTBREAK wields the power to tear out every reader's heart. A few hours after reading ALLEGIANT my distraught emotions quieted and I could clear my mind enough to calm down and don't be so upset anymore. And then, strangely, I found the ending soothing in some way. I'm mostly trying to appreciate Veronica Roth's achievement as a writer and to cope with the way she ended things, saying Good-bye to the ones we lost in the DIVERGENT trilogy and trying to see the moral and aspiration that's behind it all.

ALLEGIANT you might also enjoy ENCLAVE by Ann Aguirre, PARTIALS by Dan Wells and ARTICLE 5 by Kristen Simmons. I haven't read any of them, but I am hoping to find solace and new adventures in these stories after the DIVERGENT series has come to an end with ALLEGIANT.

* Can't get enough of FOUR? Read his short story collection, starting with THE TRANSFER.

* Want to listen to Veronica Roth reading the first chapter of ALLEGIANT? Then click here.

* You can read the full BuzzFeed interview with Veronica Roth here.
* For more information about Veronica Roth and her books visit www.veronicarothbooks.blogspot.de.
Posted by Miss Page-Turner at 7:13:00 PM