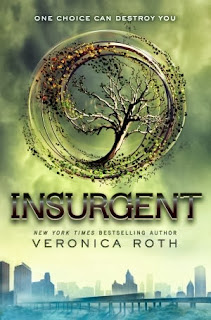 One choice can transform you—or it can destroy you. But every choice has consequences, and as unrest surges in the factions all around her, Tris Prior must continue trying to save those she loves—and herself—while grappling with haunting questions of grief and forgiveness, identity and loyalty, politics and love.

Tris's initiation day should have been marked by celebration and victory with her chosen faction; instead, the day ended with unspeakable horrors. War now looms as conflict between the factions and their ideologies grows. And in times of war, sides must be chosen, secrets will emerge, and choices will become even more irrevocable—and even more powerful. Transformed by her own decisions but also by haunting grief and guilt, radical new discoveries, and shifting relationships, Tris must fully embrace her Divergence, even if she does not know what she may lose by doing so.

DIVERGENT drowned me in a pool of emotions with all its life-changing events, the shock of sudden losses and the unique connection between Tris and Four. INSURGENT continues our story seemlessly right where DIVERGENT left off. Tris and Four are granted a few quiet moments in which the damage of the past hours and days can fully sink in. Yet the unpredictability and the explosive potential of the story didn’t change at all. Although things seem calm, pandemonium can break out at any second. Another attack thrown by the enemies, another secret bringing our lovers farther apart. You never know what's waiting behind a new page turned.

Tris and Four are put under a huge pressure to not only save the entire nation, but to save their relationship and themselves. After the tragic events of DIVERGENT, Tris cannot return to being the person she once was. Veronica Roth took Tris on an inevitable journey to finding her true self in the chaos of war. Defining who she can rely on, who are her enemies and what she has to make out of everything for herself, Tris goes through an enormous character transformation. Her character appears one of the weakest and at the same time strongest YA heroines I had the pleasure to meet. She's a very ambivalent character. At times I just wanted to shake her for her stolidity and her inability to stop herself from acting without thinking about her friends and boyfriend first. She also made me admire her for her humanity in times of lack thereof. Thanks to a brilliantly written 1st person narrator, Tris' journey grips you and integrates you into her thoughts and her story as if it were your own.

Tobias, or Four as I still prefer to call him, is definitely one of my favourite YA male characters out there. He always seemed just as strong as Tris and their equality is what makes them such a natural couple to me. They can always rely on the other and their reasons for choosing the other to be their best friend, their love make them so true. But INSURGENT wouldn’t be the second book in a series, if the tension between the two of them wasn’t building. It seems inevitable with all the inner conflicts and outer battles going on, but somehow it just didn’t feel right to me. Tris and Four fighting. They are both two very powerful personalities, but I didn’t want to see them fight and their disagreements honestly started to annoy me at some point. Is it so wrong that the peace-loving me just wanted to see them be happy and have swoon-worthy moments? Well, the rational me knew there just had to be something to come in their way.

Sometimes INSURGENT and its bombastically constructed story held the potential for an information overload. There is just so much happening at once and so much information to process. So don't be afraid to take reading breaks and the time to think about everything that's happening. Give your pulse a chance to calm down.
Veronica Roth always seems to find exactly the right words to make a character like Uriah appear cocky, yet loyal. Four, one of the most relentless fighters among the Dauntless, a sweetly loving boyfriend. Tris such a tough hero and on the inside an emotionally torn daughter, sister, friend, girlfriend. Christina, Peter, Eric, Tori, Caleb, Marcus, Marlene, Lynn just perfect the way they are. Don’t let me get started. You see I’m in love with every character, this series and Veronica Roth for being so talented.

4,5/5 ****/* INSURGENT - A gigantic character cast, an expansive world building and the extensive web of relationships make INSURGENT such a stunningly successful sequel!

Very clever, very complex. A read that challenges your brain cells, your moral beliefs, your heart, demanding the ability to read concentratedly and patiently through 525 pages of a story that equals TNT. Veronica Roth's DIVERGENT trilogy stands out of the YA fiction branch as something entirely new and brilliant!

INSURGENT you might also enjoy DELIRIUM by Lauren Oliver, SHATTER ME by Tahereh Mafi and LEGEND by Marie Lu. They are all trilogies and you will follow three kick-ass heroines into their epic dystopian worlds.

* The highly anticipated conclusion to the DIVERGENT trilogy is here. Don't miss to read ALLEGIANT!

* Want to meet Veronica? Check out her event schedule here.

* For further information about Veronica Roth and her books visit www.veronicarothbooks.blogspot.de