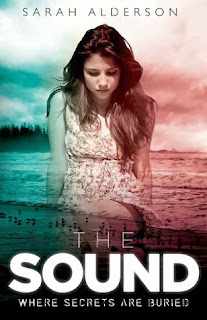 When aspiring music journalist Ren Kingston takes a job nannying for a wealthy family on the exclusive island of Nantucket, playground for Boston's elite, she's hoping for a low-key summer reading books and blogging about bands. Boys are firmly off the agenda.

What she doesn't count on is falling in with a bunch of party-loving private school kids who are hiding some dark secrets, falling (possibly) in love with the local bad boy, and falling out with a dangerous serial killer...

THE SOUND is set on the island of Nantucket. And Ren's could've been a story about a beautiful summer spent nannying and enjoying a few weeks in the US, if it weren't for the unpredictable ways of a serial killer. The long stretching beach and the sound, a kind of small strip of sea between two masses of land, hold many secrets that make THE SOUND not your average sunny beach read. Sarah Alderson found the ideal setting for her new thriller. Her personal teen experiences as a nanny in Nantucket definitely contributed to that atmospheric and rich setting we get to explore in her newest novel.


Ren Kingston is British. And Sarah Alderson so cleverly made use of that fact to bring in small hints about the differences between the US and UK, with focus on their comical side of course.
In the US, Ren is staying with Carrie, Mike and their two kids. As it will be Ren's job to nanny them, we will get to know Braiden and Brodie, too and spent time with them. They are two absolutely adorable kids. But as Carrie and Mike are pretty easy-going and accommodating parents, they give Ren the space and time to explore the island and make new friends, too.
Ren meets local teens her age and is friends with them pretty fast. Her summer will be filled with riding her bike, hanging out at the beach and attending fashionable parties by the local kids and their families. She's into music, reading and blogging, aspiring to become a music journalist. I liked her a lot and think we could easily be friends. Her attribute of assistance: Ren is one of the few YA girls who seem to be able to calculate the danger they're in. She's very set on listening to her natural instinct.

Now let's come to the serial killer. Without him this thriller would be only half as much fun. The story around the nanny murderer is chilling and intriguing and it's someone who's on the island with them, someone who Ren already met. This serial killer could've been so creepy with all the tension building and Ren being his possibly next target. It seemed he was a bit too shy to bring on the big psychotic action in the end. His presence created an unnerving feeling, but didn't lead to the high number of bone-chilling incidents  I had been hoping for.

Besides the fear of becoming the next victim of a murderer, a dark secret of a different kind causes trouble and various conflicts in Ren's circle of new friends. Most of them are privileged children of rich parents and couldn't be bothered to hide their disdainful character, openly bullying and provoking local bad boy Jesse. The boy Ren feels herself drawn to, despite her dating someone else (there goes her no-boys-summer rule).
Jesse's father owns a bike shop and Jesse helps whenever he can. He appears to be the rough and scorned bad boy. Unsurprisingly, there's much more to him than the rumors that people so willingly believe. Jesse is confident even though he's not very popluar with everyone on the island and he is protective of the people he loves. He's very skilled with his hands (ha!), the perfect YA book boy crush. His and Ren's relationship is heated and much more compelling than the actual murder case (which is definitely not a bad thing). Sarah Alderson is the best at writing book boys that will have you crushing on them hard within seconds.

4,5/5 ****/* THE SOUND – This strinking new book by Sarah Alderson is a chilling beach read providing you with a luscious love story, a local bad boy to lust after and a slightly less creepy murderer than the story actually needed.

How about a few autumnal days spent at the sea? THE SOUND would make a perfect beach read for the currently darker season! Sarah Alderson is always a safe bet when you are looking for a thrilling and likewise steamy read. I'm a fan of her HUNTING LILA series and now officially can't decide between Alex and Jesse as my favourite Sarah Alderson book boy.

"He ignores me, reaching for a T-shirt on the counter and pulling it on as I watch, trying to force myself not to stare at. Those. Muscles. I forbid myself to quiver. Or to reach out and touch them to check that they are real." ― p. 42

THE SOUND you might also enjoy LITTLE WHITE LIES by fellow UK author Katie Dale, CLARITY by Kim Harrington, set in a beach town as well but with a specially gifted heroine. And of course, if you haven't read it yet, HUNTING LILA by Sarah Alderson. Lila's boyfriend Alex is just as yummy as Jesse. 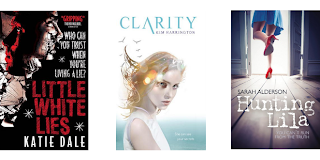 * How do you like the US cover of THE SOUND?

* Read an excerpt of THE SOUND.

* For more information about Sarah Alderson and her books visit www.sarahalderson.com.

* Thanks to Simon & Schuster UK for sending me a review copy of THE SOUND!
Posted by Miss Page-Turner at 3:27:00 PM