Book Review: Captive: The Forbidden Side of Nightshade by A.D. Robertson 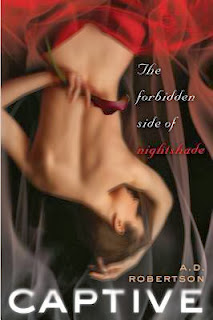 
Twenty-five-year-old Tristan Doran enjoys a life of incredible power and privilege. As a direct descendant of the Keepers—witches who have embraced dark magic—he defers to no one but his overlord, Lord Bosque Mar. For most of his life, Tristan has been kept out of the centuries-old Witches War, his bloodline too valuable to risk in battle.

But when a beautiful, young human Searcher named Sarah is captured and made a prisoner in his Irish castle, Tristan’s infatuation with her flings him headlong into the fray. Captive and captor, unable to contain their longing, embark on a passionate, forbidden romance together—only to learn that their love is at the heart of a prophecy predicting the downfall of the Keepers’ ages-old reign.

So far you've mostly seen reviews of YA titles published here on the blog and today's review of CAPTIVE is an exception. I was so curious about this new NIGHTSHADE book by Andrea Cremer, written under the pen name A.D. Robertson that I couldn't pass up the kind offering of an e-copy by Dutton Adult.

Despite its rather uninspired cover, CAPTIVE surely introduces us to a higher seductive sphere of the NIGHTSHADE world. It's called 'the forbidden side of Nightshade', and rightfully so. For once this book is more erotic and explicit than the NIGHTSHADE trilogy before it. The R-rated scenes are what makes Sarah and Tristan's story so steamy and overly intriguing, the attraction between them is palpable.
When I first heard of Andrea Cremer's new book I couldn't help myself to compare it to one very popular series by E.L. James you might know, but CAPTIVE isn't nearly as taboo as I imagined it to be. It was written in a style that could've fit the original NIGHTSHADE trilogy, too, and easily added some steam to Calla's romantic scenes.
But there's more to the forbidden side than the sex scenes. Tristan is a Keeper and Sarah a Searcher, both sworn enemies and not at all allowed to engage with each other in an intimate relationship.

CAPTIVE doesn't have as many battles as the NIGHTSHADE trilogy to offer, its focus is on Sarah and Tristan getting to know each other. It's mostly just the two of them with very few other characters having appearances from time to time. Bosque Mar, the evil Keeper you know from the NIGHTSHADE series, will be playing a role, too.
Significant is that Andrea Cremer  kept the spirit of her NIGHTSHADE series and told us some more about the ancient war between Keepers and Searchers. Fans won't be disappointed!

3,5/5 ***/* CAPTIVE - Not as bellicose as the NIGHTSHADE trilogy nor as refined plot-wise , but with high aphrodisiac paranormal appeal.

The NIGHTSHADE series had many characters I set my heart on and there was so much more at stake than in CAPTIVE. So now the novel about the forbidden side of Nightshade appeared a bit imbalanced if you compare it to the NIGHTSHADE trilogy before it, but it got into the required details where the NIGHTSHADE series always put an end to explicit sexual interactions, since it was a YA series.

"At that late hour Castle Tierney was quiet, but Tristan knew better than to believe he moved through its halls without notice. There was never a time when all the creatures within the castle walls slept. It was a place of wariness and watching."  ― Chapter 5

CAPTIVE you might also enjoy DARKFEVER by Karen Marie Moning, HALFWAY TO THE GRAVE by Jeaniene Frost and DARK LOVER by J.R. Ward. Three series I have yet to read, all of them for an adult audience. I'm not sure I've heard about a YA book series with an adult companion novel with R-rated content to recommend. Can you think of any?

* For more information about Andrea Cremer and her books visit www.andreacremer.com.

* Thanks to Dutton Adult for sending me an e-copy of CAPTIVE for review!