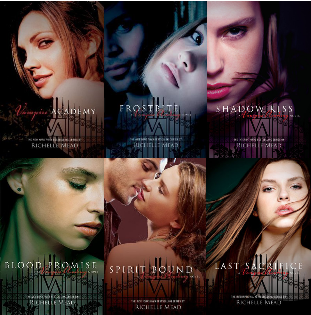 St. Vladimir’s Academy isn’t just any boarding school—it’s a hidden place where vampires are educated in the ways of magic and half-human teens train to protect them. Rose Hathaway is a Dhampir, a bodyguard for her best friend Lissa, a Moroi Vampire Princess. They’ve been on the run, but now they’re being dragged back to St. Vladimir’s—the very place where they’re most in danger...

Rose and Lissa become enmeshed in forbidden romance, the Academy’s ruthless social scene, and unspeakable nighttime rituals. But they must be careful lest the Strigoi—the world’s fiercest and most dangerous vampires—make Lissa one of them forever.

And I thought I'd had enough of vampires. After many beloved and some stereotypical YA vampire books in the past years I felt fine with putting that category on the waiting list for a while. Until I decided to pick up the first book in this series and Richelle Mead's VAMPIRE ACADEMY restored my faith in good and imaginative vampire worlds.
I'd had my eyes on the VAMPIRE ACADEMY books for quite a while, many people kept recommending them and I can remember the rave about the last book in the series. Now with the first movie coming out in 2014 I couldn't hold out on this series any longer.

Richelle's series isn't your average -There's a vampire in this story and he's gonna bite you, so you become one, too- story. In the VAMPIRE ACADEMY series you don't encounter ordinary vampires. There are different types of blood-suckers, like different links to an evolutionary chain. Our two heroines Rose and Lissa cover the two categories of Moroi and Dhampirs. Moroi are vampires who have the power to wield magic. Dhampirs are a crossing between Moroi and humans and their task is to protect royal Moroi. At the St. Vladimir's Academy they are receiving a special training for the purpose of becoming body guards when they are finished. Those two kinds are co-existing and depending on the other, never purposefully harming humans.
The Strigoi make up the third and an entirely different category. They are soulless creatures only existing to destory and hurt humans, Moroi and Dhampirs alike. Strigoi are effortless killers, but they can also be cruel enough to turn the other vampires into one of them and doom them to become evil and heartless, too. They make for evil and seemingly unstoppable enemies in all six books of this series.
The fight between Moroi, Dhampirs and Strigoi is the main focus of the VAMPIRE ACADEMY series. Of course you can expect political, social and personal conflicts as well.

Now the St. Vladimir's Academy is home to many Moroi and Dhampirs and is the central setting for the six books in this series. Housing, training and study rooms assembled like a small campus, the academic feel is definitely there. But with all the unexpected attacks and complications appearing on the scene it's no wonder Rose and her friends are forced to leave their textbooks behind and step into battle.
The characters are travelling a lot, too. Really enjoyed seeing many new places together with Rose and her friends.

All six books read on a book binge equal a huge vamptastic adventure beyond imagination. So much action and fights! However the series has its quiet moments, too. The greatest personal focus lies on the bond Rose and Lissa share as best friends and their spiritual bond that's pretty special for Moroi standards. Rose can feel what Lissa's feeling and in certain moments even see through Lissa's eyes. At first this was a very fun aspect about their friendship. The more often Rose visited Lissa's body though, story lows occurred. Sometimes I just felt like skipping these scenes altogether.

Rose is the breakaway, tough and sexy warrior. Lissa her well-guarded, spiritual, emphatic protégé. They are body and mind, friends who rule the hearts of many readers. They are lucky to have been gifted with two equally appealling love stories, slightly erotic, romantic and steamy for sure.
Lissa finds Christian, an outsider, who was not even looking for acceptance until he met Lissa. They are healing each other from the wounds of their pasts and click together like a puzzle meant to exist. And Rose gets her love story with Dimitri. Just like everyone told me, that guy is sexy! Their difference in age and experience puts a forbidden touch to their love story. He is her instructor and she is supposed to keep her hands off him. Is that a dare? Major turn-on!

The first book in the VAMPIRE ACADEMY series is funnily the one book which I liked least out of the six books in this series. I don't remember it as overly significant to the story, not remarkable character development-wise. Its writing feels a bit clumsier than the other books. While I read all six books back to back, I definitely saw a noticeable evolution over the entire series in writing, story line, character development, and surprising moments.
FROSTBITE, the second novel, is one of my favourie parts in the series, sending our friends on a trip to winter wonderland where they stay at a dreamy lodge. And this instalment offers the chance to make new friends and meet another boy who will play an important role in Rose's life, Adrian.
SHADOW KISS is the part of Rose's story that concentrates on the St. Vlad's students' training the most. The academy announces a big training and fight simulation for the entire school, which is supposed to prepare them for their lives as body guards.
In the beginning of each book Rose is often telling you what's happened so far. What is a thoughtful help for people who had to wait such a long time between the novels, is kind of repetitive for binge readers like me. Tiring were recaps in the beginning, retellings of major events in past books and hints as explanations to relationships strewn into the ongoing story.
BLOOD PROMISE is a lot about travelling and enduring hardships. It's probably the darkest book in this series! SPIRIT BOUND is about returning to the place you belong, your true self and the fight for justice.
And LAST SACRIFICE really is the final quest about rescuing Rose from hopefully false accusations. You'll get wild chases, final battles and new beginnings.

The books keep getting longer and longer. Currently LAST SACRIFICE is the longest book I've read so far this year. Not just in page count – 2688 pages- is this series truly epic, but in its emotional variety, youthful voices, and imaginative, adventurous story line.

5/5 ***** VAMPIRE ACADEMY Series- One of the most enthralling and memorable YA vampire worlds I've had the pleasure to live in.

A series I wish I would have encountered much sooner. I'm so glad that all six books were released already and I could pick up the next book right after one was finished. I wouldn't have wanted to wait one year for each of them to come out. The first three BLOODLINES books are waiting on my Kindle to be read. The decision whether to start the series now or wait till all of them have been released has yet to be made.

"I don't know," he teased. He looked perfectly sane now, exhibiting no trace of the weird behavior I'd witnessed in his room. And yeah, he looked a lot better in a tuxedo than any guy I'd seen in there so far. "As many times as we keep seeing each other? This is, what, the fifth time? It's starting to look suspicious. Don't worry, though. I won't tell your boyfriend. Either of them." ― Frostbite p. 230

the VAMPIRE ACADEMY series you might also enjoy its spin-off series BLOODLINES by Richelle Mead. There will be six books in this series, too. Then how about THE MORGANVILLE VAMPIRES series by Rachel Caine or BLUE BLOODS by Melissa de la Cruz? I haven't read them, but both series have many many fans.

* Can't get enough of the series? Then check out VAMPIRE ACADEMY: THE ULTIMATE GUIDE.

* Click here to read an excerpt of VAMPIRE ACADEMY.

*  For more information about Richelle and her books visit www.richellemead.com.