Book Review: He's So/ She's So Series by Kieran Scott 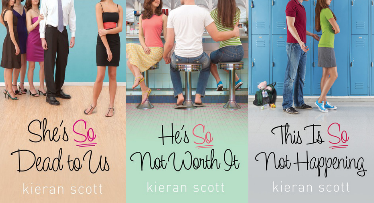 Title: She's So Dead To Us, He's So Not Worth It, This Is So Not Happening
Author: Kieran Scott
Publisher: Simon & Schuster Books for Young Readers
Publishing Date: May 25th 2010, June 7th 2011, May 1st 2012
Length: 288 pages, 360 pages, 320 pages
Keywords: YA, contemporary, romance, friendship, intrigue
Source: Simon & Schuster Galley Grab/ Bought

Ally Ryan would rather be in Maryland. She would rather be anywhere, in fact, than Orchard Hill, site of her downfall. Well, not hers exactly—but when your father’s hedge fund goes south and all your friends lose their trust funds, things don’t look so sunny for you. Her mother moved her to Maryland to flee the shame, but now they’re moving back. Back to the country-club, new-car-every-year, my-family-came-over-on-the-Mayflower lifestyle that Ally has outgrown. One bright spot, however, is gorgeous, intense Jake Graydon. But it won’t be easy for the two of them to be together—not if his friends (her former friends) have anything to say about it. Is Ally ready to get thrown back into the drama of the life she left behind?

Ally Ryan's life is complicated and it's one-hundred percent made up of drama. She's returning to Orchard Hill where the rich and beautiful live and back to her old problems. And now that she's back, she's an outsider and her old friends hate her. Even though she's been dealt the outsider role I wasn't too fond of our main character Ally. She's often unreasonable and it takes her a long time to learn from past mistakes. Just too long for my sympathy to last through all three books.

Her so-called friends were even worse. They were nothing but shallow and not at all sensitive or there for Ally when she needed them most. Kieran Scott explores the lives of the upper class, their worries and the things that make their lives so fancy and entertaining. The time they spent at their beach houses in the second book was the most fun part of the entire trilogy, giving it a light summer read quality.

At first I really liked Ally and Jake together and the time it took for them to figure out what they had. The dual point of view was enjoyable. You get chapters from Ally's point of view and sequences from Jake's perspective and their very different lives. Jake could be cute and thoughtful when he wanted to be, but sometimes he didn't exactly shine as the perfect male main character or stand out for his hyper intelligent and reasonable personality.
I hate to say it but at some point I just couldn't bring myself to care about these characters anymore. Ally and Jake's relationship is one of the on-again, off-again kinds and just as much as it frustrated them to be confronted with all these obstacles it frustrated me, too.
Their thinking is often reigned by a rather childish urge to insist on their pride, knowing they would damn themselves to misery. The HE'S SO/ SHE'S SO trilogy is definitely TV show drama material that has the quality to make you cheer for the characters to finally be happy, for the friends to make up and for everyone to overcome their differences and grow up already.

SHE'S SO DEAD TO US was the part of Ally's story that was still entertaining and that offered a story with a few conflicts I wanted to see solved in the end. The second started up right where the first book ended and it added a few more well-placed twists and turns to Ally's story. If it weren't for the ever same circles of spitefulness and scheming behavior that never made any of the characters look like friends I could've enjoyed it more than I actually did. If Kieran Scott had mainly concentrated the story on reuniting the friends instead of the immature fights between them, it could've worked as a decent sequel. I'm more into stories that work towards a positive example of good friends, of people who support each other and are there for each other even when one of them isn't as lucky or rich as before.
Don't even let me get started on the third book, THIS IS SO NOT HAPPENING. I could've very well done without a third book in the series, because it opened up a whole other can of worms that got on my nerves all the time.

3/5 *** HE'S SO/ SHE'S SO Series - The rather juvenile YA version of The OC and Gossip Girl, with drama, gossip and a ton of romantic complications.

The HE'S SO/ SHE'S SO series was entertaining in a very basic way. It's an original high school read and Kieran Scott definitely put in all the topics teens have to deal with in every good TV drama and in real life, too. There are sports, cat fights, teen pregnancy, first times, alcohol and all the other things that make your teen years so exciting and scary.

"My legs pumped the pedals with all their might as I raced away from Connor's house, my breath coming short and shallow, until I reached Harvest Lane. There I placed my feet on the ground and glanced back over my shoulder in the direction of Vista View. Somewhere back there behind the trees was my old house. My old life. The life that I, apparently, could never go back to." ― p. 29

the HE'S SO / SHE'S SO series you might also enjoy BOYS, GIRLS AND OTHER HAZARDOUS MATERIALS by  Rosalind Wiseman, THE BOYFRIEND THIEF by Shana Norris, KEEP HOLDING ON by Susane Colasanti. More mean girls, intrigues and eventful high school experiences.

* Can't get enough of Kieran's books? Read GEEK MAGNET next.

* Click here for an excerpt of SHE'S SO DEAD TO US.

* Listen to Kieran Scott talking about SHE'S SO DEAD TO US here.

* For more information about Kieran Scott and her books visit www.kieranscott.net.

Email ThisBlogThis!Share to TwitterShare to FacebookShare to Pinterest
Labels: 3-star rating, Book Review, He's So Not Worth It, Kieran Scott, She's So Dead To Us, Simon and Schuster Books for Young Readers, This Is So Not Happening