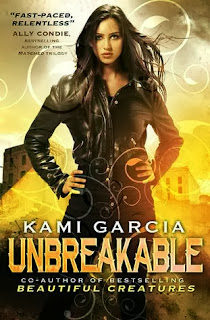 
Kennedy Waters didn't believe in ghosts, until one tried to kill her.

When Kennedy finds her mother dead, her world begins to unravel. She doesn't know that evil forces in a much darker world are the ones pulling the strings. Not until identical twins Jared and Lukas Lockhart break into her house and destroy a dangerous spirit sent to kill her. The brothers reveal that her mother was part of an ancient secret society responsible for protecting the world from a vengeful demon - a society whose five members were all murdered on the same night.

Now Kennedy has to take her mother's place in the Legion if she wants to uncover the truth and stay alive. Along with new Legion members Priest and Alara, the teens race to find the only weapon that might be able to destroy the demon - battling the deadly spirits he controls every step of the way.

Kennedy's life changes abrubptly when her mother is murdered by a ghost that soon is after Kennedy as well. She has never been in contact with anything supernatural before and knows just as much as readers do when they first learn about the special group of people who call themselves the legion. We find out how the legion was founded and learn more about the different types of ghosts they have to fight and the best ways to send them back to where they came from. Sketches of meaningful symbols and inventions of importance to the story are included to underline the books' ritual character and give it another boost of authenticity.

The legion is a group of five people whose goal is to rid the world of evil spirits and ultimately of the demon Andras, that has been the legion's enemy for many hundred years. Now five teens have to continue their parents' or grandparents' legacy. The twins Lukas and Jared, one introduced as the bad boy, the other as the nice boy next door. Then there's the group's brilliant inventor and youngest member Priest. Alara, the only other female group member. She's very loyal and protective. And now Kennedy's a part of their group, too.
Together they are set on finding clues that are meant to lead them to the weapon that could destroy Andras. It is a very absorbing quest and a few tasks and riddles demand to be solved.

It only takes a few days for Kennedy to become an accepted member of their group and suddenly ghosts are everywhere. Supernatural ghost encounters are the common theme in the story as one could expect from a story about ghost hunting kids. And not just your average ghosts. Kami's spirits are freakishly scary just as her ideas to frighten her readers. Ravens, abandoned prisons and old wells. Kami Garcia knows how to write a horror ghost story. Every single evil spirit in the story gave me a good scare.

The romantic relationship between Kennedy and Jared and the tension their intimacy creates between them and Jared's brother Lukas ,who obviously seems to like Kennedy as well, was generally appealing. But I always had a nagging feeling about their relationship. Not because I didn't like it (I really did), but because it wasn't as believable as I'd hope it to be/to grow. They have very strong feelings for each other from the moment they meet each other. And for me it was too early in the story that they were talking about overwhelming feelings of love and even trust issues. Too many strong emotions in too short a time, considering that both Kennedy and Jared are naturally cautious characters and trying to keep their distance. I'm really curious in which direction their relationship is headed in UNBOUND, the sequel to UNBREAKABLE.

I was surprised to read a story loaded with action, one ghost encounter following the next without lengthy dialogues or filling scenes in between. One or two more scenes on the characters in between their ghost huntings would've been appreciated, maybe a bit more on their backgrounds and former members of the legion.
Each chapter is on the shorter side with about eight to ten pages, making it easy to loose track of time and keep reading till the early hours of dawn...when it's more likely you'll be able to close your eyes after a ghost story like this anyway.

4/5 **** UNBREAKABLE – A spine-chilling, fast-paced and ideal read for fans of Supernatural.

If you read the BEAUTIFUL CREATURES series by Kami Garcia and Margaret Stohl you know that these two authors can write, international bestselling stories for that. UNBREAKABLE being Kami's first solo project, I was very curious to find out in how far her writing would change without the support of a co-author. The first book in the THE LEGION series was her opportunity to show how eerie ghost encounters can be. Kami Garcia always has another spooky spirit up her sleeve and the legion's five teens are easily my new favourite ghost hunters!

"As my bare feet sank into the wet earth, I tried not to think about the dead bodies buried beneath me. I had passed this tiny graveyard a handful of times but never at night, and always outside the boundaries of its peeling iron gates." ― p. 1

UNBREAKABLE by Kami Garcia you might also enjoy THE DEVOURING by Simon Holt, ANNA DRESSED IN BLOOD by Kendra Blake and POSSESS by Gretchen McNeil with many new ghostly and demonic acquaintances to make.

* How do you like the US cover for UNBREAKABLE?

* Did you enjoy UNBREAKABLE? Don't forget to put its sequel, UNBOUND on your 2014 wishlist.

* Read an excerpt of UNBREAKABLE!

* For more information about Kami Garcia and her books visit www.kamigarcia.com.

* Thanks to Simon & Schuster UK for sending me a copy of UNBREAKABLE for review!
Posted by Miss Page-Turner at 8:59:00 PM