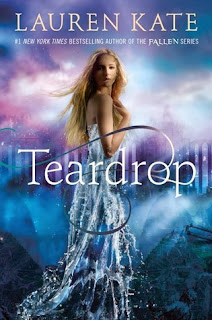 Seventeen-year-old Eureka won't let anyone close enough to feel her pain. After her mother was killed in a freak accident, the things she used to love hold no meaning. She wants to escape, but one thing holds her back: Ander, the boy who is everywhere she goes, whose turquoise eyes are like the ocean.

And then Eureka uncovers an ancient tale of romance and heartbreak, about a girl who cried an entire continent into the sea. Suddenly her mother's death and Ander's appearance seem connected, and her life takes on dark undercurrents that don't make sense.

Can everything you love be washed away?

Never, ever cry...that's been Eureka's mantra since she's been a little kid. She's a descendant of a long line of women who may be powerful enough to drown the whole world with their tears. What an unique approach at an immense and very powerful character conflict! In addition the story Lauren Kate spins around the old Atlantis legend is imaginative, her writing is as diverse and her plot as gripping as I've known it from her FALLEN series.

Lauren Kate deliberately chose to set the focus on Eureka's complicated emotional world, how she's dealing with her mother's death and where she finds comfort now. Her best friend Brooks was one of my favourite characters... until their relationship morphed into some kind of an unhealthy and very strained romantic thing. There's not enough time for Eureka and Ander as it is and it took some time for me to see them working as a couple, so why introduce a possible second love interest? Eureka and Brooks' relationship isn't at all as it seems and a good portion of attentiveness will help the reader figure out what's behind it all. Nevertheless, I'm sure there will be just as many Team Brooks fans as Team Ander girls.


One of the things Eureka's mother left for her is a book. The book of love. And of course Eureka tries to translate it. The sequences of Eureka reading about this ancient tale were slowing the story down too much and I caught myself desperately waiting for the next encounter with Ander. He's perceptive and persistent. Also he is one of the few guys who knows his feelings are true and always follows his instinct to put Eureka's life before his own. YA readers will fall in love with him even before Eureka does! Eureka and Ander were just meant to be, their chemistry is great and the build-up of very strong emotions between them is one of the reasons why I'm so looking forward to see where their story is headed in the second TEARDROP book.
Eureka's enemies are numerous, people who don't want to see her gain power. TEARDROP has two strong fronts, one group is convinced that the world's end will mean a better future for everyone. The others are determined to prevent Eureka from crying, even if it has to happen by taking her life. The confrontations between these two formations could have been more offensive and dangerous for my like (because there is so much at stake). Still it was plausible that Lauren took her time to set the story and give us the chance to get to know Eureka very well, instead of giving us an action overdose.
Eureka's relationship to her mother, father, her step-mother and their twins is of high importance, too. Many childhood memories mixed with her current situation make the reader care about every character so much more. So I would characterise TEARDROP as a more character-focused first book in a series rather than one that would put the plot and its fast pace first.

4/5 **** TEARDROP – A mesmerizing new interpretation of the Atlantis myth, with a smooth and fluent writing and a spellbinding attraction between two lovers who are destined to be enemies.

From the picturesque and maritime setting, days spent at the beach or on the ocean sailing, to Eureka's restraint to shed any tears, this book is water-themed through and through. Lauren Kate's dreamy interpretation of the Atlantis myth leaves room for so many more ways for the story to go. I'm really curious to see what Lauren Kate's Atlantis looks like and how Eureka and Ander are going to survive the looming end of the world. So ready to dive into book two!

"The question and her gaze paralyzed Ander. In that bewildered moment, the wave curled around them, and a crucial chance was lost: he would have time to save only one of them. He knew how cruel it was. But, selfishly, he could not let her go.
Just before the wave exploded over them, Ander grabbed her hand.
Eureka." ― p.10

TEARDROP by Lauren Kate you probably won't be finding another YA book with an Atlantis-inspired story background, at least I haven't heard of it. Please let me know if you do know one. I picked three mermaid or siren and water-themed books you could enjoy if you liked TEARDROP. They are OF POSEIDON by Anna Banks, SIREN by Tricia Rayburn and RIPPLE by Mandy Hubbard.

* Want to read more by Lauren Kate? How about starting her FALLEN series?

* You can watch the TEARDROP book trailer here.

*  For more information about Lauren Kate and her books visit www.laurenkatebooks.net.

* Many thanks to Rose and Random House UK for sending me a copy of TEARDROP for review!