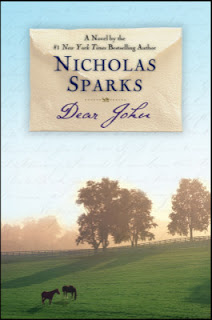 ~ The Author ~
Nicholas Charles Sparks was born in Omaha, Nebraska on December 31, 1965.
In 1994, at the age of 28, he wrote The Notebook over a period of six months which was only the beginning to a very successful writing career. He lives in North Carolina with his wife and five children. His ancestry is German, Czech, English, and Irish, he's 5'10" and weighs 180 lbs. He is an avid athlete who runs daily, lifts weights regularly, and competes in Tae Kwon Do. He attends church regularly and reads approximately 125 books a year. He contributes to a variety of local and national charities, and is a major contributor to the Creative Writing Program (MFA) at the University of Notre Dame, where he provides scholarships, internships, and a fellowship annually.

Extracts of author profile by Amazon.com
~ The Novel ~
Dear John was first published in 2007 by Warner Books and was made into a movie in 2010 starring Channing Tatum and Amanda Seyfreid. Other novels by Nicholas Sparks are e.g. The Notebook (1996), Message in a Bottle (1998), Nights in Rodanthe (2002). His newest novel Safe Haven was published in September 2010.
~ The Story ~
An angry rebel, John dropped out of school and enlisted in the Army, not knowing what else to do with his life--until he meets the girl of his dreams, Savannah. Their mutual attraction quickly grows into the kind of love that leaves Savannah waiting for John to finish his tour of duty, and John wanting to settle down with the woman who captured his heart. But 9/11 changes everything. John feels it is his duty to re-enlist. And sadly, the long separation finds Savannah falling in love with someone else. "Dear John," the letter read...and with those two words, a heart was broken and two lives were changed forever. Returning home, John must come to grips with the fact that Savannah, now married, is still his true love--and face the hardest decision of his life.
Summary by Goodreads
~ The Review ~
Two young lovers have to part a few weeks after they’ve fallen in love and a very hard time for both of them begins. Most relationships don’t last long after months of separation, but John and Savannah believe in their love and want to fight for what they have.  The more the two young lovers turned away from each other, the more my interest aroused. I wanted to know how they achieve to stay close to each other’s heart while there are a few thousand miles between them.
The story of John and Savannah is told from John’s point of view so that you get a very detailed insight into his feelings and thoughts and can even more identify with him than the female protagonist. Whereas John is an impulsive and sometimes imperfect person, trying to master daily life with his unusual shy father, Savannah appears like a saint and her life seems a bit kitschy sometimes.
The character of John’s father made a great impression on me. He wakes up in the morning, prepares breakfast, goes to work, comes back home in the evening and goes to bed at the same time each day. His only interest are his coins, for his son John he’s got only a few words to share. When you first thought he is just uninterested or taciturn,  you will find out something very interesting about his character.
I really like love stories, but in my opinion Nicholas Sparks' writing stlye is a bit too descriptive. Still he knows how to write a story people would be sad about or touched by, especially romantics.
~ We love this book because… ~
1) we love the beach, and which place could be better to fall for the love of your life?
2) letters have the power to contain so much more than plain words
3) the moon’s magic connects the memories of two people so deeply, although they are miles apart from each other
4) it expresses that war is serious, no game, but sometimes it has the power to play with us like men in board games
5) it deals with the important topic of autism
~ The Verdict ~
Serious issues mixed with the story of two young adults, experiencing their great first love together. Fans of big feelings, romance and strokes of fate will love Dear John as much as other novels by Nicholas Sparks.
Posted by Miss Page-Turner at 4:13:00 PM