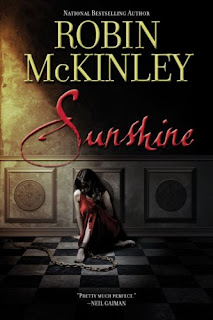 ~ The Author ~
Born in her mother's hometown of Warren, Ohio, Robin McKinley grew up an only child with a father in the United States Navy.  She moved very often and her passion for reading was one of the most constant things in her childhood. So she began to remember events, places, and time periods by what books she read where. For example, she read The Chronicles of Narnia for the first time in New York and The Lord of the Rings for the first time in Japan. She still uses books to keep track of her life.
Robin McKinley has won various awards and citations for her writing, including the Newbery Medal for The Hero and the Crown and a Newbery Honor for The Blue Sword.
Author profile by Goodreads
For further information check out the author’s page: http://www.robinmckinley.com/
~ The Story ~
They took her clothes and sneakers. They dressed her in a long red gown. And they shackled her to the wall of an abandoned mansion-within easy reach of a figure stirring in the moonlight.


She knows that it is a vampire.


She knows that she's to be his dinner, and that when he is finished with her, she will be dead. Yet, when light breaks, she finds that he has not attempted to harm her. And now it is he who needs her to help him survive the day...
Summary by Goodreads
~ The Novel ~
Sunshine originally appeared in 2003. Reissued by Berkley Trade (October 7, 2008) and Transworld/Bantam UK (August 14, 2008).
~ The Review ~
After reading the book’s back-text I was curious about Sunshine, because it promised to be a 400 pages long breaking-free-struggle and about dealing with the interesting situation of a human and vampire being imprisoned together.
But the book’s back only describes the story’s beginning and the exciting imprisonment scene has an ending even before I’ve reached page 100. What about the remaining 300 pages?
Well, I do not want to offend someone, especially the author, because writing a novel is a lot of work and should be highly respected, but I have to express my disappointment now.
The story of Sunshine then develops a very strange and uninteresting fight against an evil vampire. In the end I couldn’t even follow the plot. My imagination (usually very vivid) couldn’t keep up and so I just finished it, because I hate giving up a novel until I’ve read its last page.
There are pages over pages describing the heroine Sunshine baking. Furthermore every friend and family member is introduced (which would be a nice thing to establish a connection to every character) but I wondered where their active plot parts were and why the author had to describe them so detailed when there was no further role for them.
Another quibble about Sunshine is the relation between Sunshine and the vampire Constantine. There is an existing relationship between them, but it is never clearly defined so that I always waited for a determining event, action, expression of emotions… in vain.
Despite my critique, I would still give another Robin McKinley novel a chance hereafter, because every novel is different and remember: Just because I didn’t like it, you have to avoid this novel, too. Maybe give it a chance and find out yourself if you like Sunshine!
~We love this book because… ~
1) we enjoy baking and the heroine’s talent for it
2) vampires are our favourite fantasy creature
3) of its exciting captivity- escape scene
4) of the general interesting friendship idea between human and vampire
5) of its intriguing cover
~ The Verdict ~
Sunshine does not shine very brightly! Read this novel only if you are a huge fan of Robin McKinley or interested in very detailed and long-winded descriptions of sub-plots.
Posted by Miss Page-Turner at 1:06:00 PM