Book Review: The Girl Who Played with Fire by Stieg Larsson 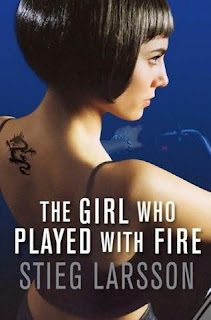 ~ The Author ~
Stieg Larsson gleaned a remarkable degree of success before his too-early death in 2004. He had delivered to his publisher three remarkable crime novels; the initial book in his ‘Millennium’ sequence, The Girl with the Dragon Tattoo, had enjoyed an unprecedented success in his native Sweden before the translation took the UK by storm. Larsson had made a considerable mark as a crusading journalist, with a speciality in tackling political extremist groups. But he offered assistance to many people and groups who he felt were vulnerable – something of a modern hero, in fact.
Author profile by Amazon.de
~ The Novel~
The Girl Who Played with Fire (February 2009) is the second novel in the Millennium trilogy, followed by The Girl Who Kicked the Hornet’s Nest (April 2010). The first novel, The Girl with the Dragon Tattoo, was released in July 2008. The posthumous publication of the Millennium trilogy, not only resulted in high sales figures, turning all three novels into worldwide bestsellers, but it also showed which loss of a great writing talent the literary world has to mourn.
~ The Story ~
Mikael Blomkvist—crusading journalist and publisher of the magazine Millennium—has decided to publish a story exposing an extensive sex trafficking operation between Eastern Europe and Sweden, implicating well-known and highly placed members of Swedish society, business, and government.

On the eve of publication, the two reporters responsible for the story are brutally murdered. But perhaps more shocking for Blomkvist: the fingerprints found on the murder weapon belong to Lisbeth Salander.

Now, as Blomkvist—alone in his belief in her innocence—plunges into his own investigation of the slayings, Salander is drawn into a murderous hunt in which she is the prey, and which compels her to revisit her dark past in an effort to settle with it once and for all.
Summary by Goodreads
~ The Review ~
The Girl Who Played with Fire continues the story around Lisbeth Salander and I have to accentuate her unique character once again. In general an author creates a protagonist and we love him because he fits into society’s conventions. With Lisbeth Salander, Stieg Larsson created a protagonist, who can be a rebel and actually be accepted and adored  at the same time. Despite her tough outer appearance, I felt a high sympathy for Lisbeth and couldn’t wait to learn more about her personality, past and moral.
But Lisbeth isn’t the only main character developing in the second part of the Millennium trilogy. Mikael Blomkvist tranforms from an engaged detective to an active, self- investigating personality.
I loved the way Stieg Larsson causes interest in tLisbeth's and Mikael's further relationship and always keeps us reading and wanting to know more.
Stieg Larsson doesn’t disappoint, his writing style is fluent and sophisticated. In The Girl Who Played with Fire he draws a very wide but intelligible and clever network of backgrounds and relationships around our favourite protagonists Lisbeth and Mikael.
The Girl Who Played with Fire continues The Girl with The Dragon Tattoo as artfully as expected. This novel represents a new type of thriller!
~ We love this book because… ~
1) we get a very authentic insight into the workspace of an newspaper
2) of our heroine’s interest in remarkable disciplines
3) a good friend is always by your side and doesn’t care about the whole world’s opinion
4) of its cruel cliffhanger at the end!
5) a heroine can actually be a rebel
~ The Verdict ~
Stieg Larsson achieves to disentangle a ball of relationships with the knitting needle of a single intrigue and make a bestseller of pullover out of it. Great read for all suspense lovers and fans of extraordinary protagonists!
Posted by Miss Page-Turner at 4:07:00 PM