Book Review: The Girl Who Kicked the Hornet’s Nest by Stieg Larsson 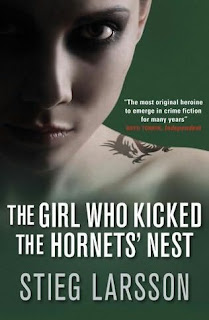 Stieg Larsson gleaned a remarkable degree of success before his too-early death in 2004. He had delivered to his publisher three remarkable crime novels; the initial book in his ‘Millennium’ sequence, The Girl with the Dragon Tattoo, had enjoyed an unprecedented success in his native Sweden before the translation took the UK by storm. Larsson had made a considerable mark as a crusading journalist, with a speciality in tackling political extremist groups. But he offered assistance to many people and groups who he felt were vulnerable – something of a modern hero, in fact.

Author profile by Amazon.de
~ The Novel~

The Girl Who Kicked the Hornet’s Nest (October 2009) is the last novel in the Millennium trilogy. The first two novels The Girl with the Dragon Tattoo and The Girl Who Played with Fire were released in July 2008 and February 2009. The posthumous publication of the Millennium trilogy, not only resulted in high sales figures, turning all three novels into worldwide bestsellers, but it also showed which loss of a great writing talent the literary world has to mourn.
~ The Story ~

The Trial
Lisbeth Salander, outsider and apparent enemy of society, is charged with attempted murder. In addition, the state has determined that she is mentally unstable and should be locked away in an institution once again.

The Enemy
Pulling the strings behind the state's prosecution is the inner circle of the Swedish security police. Only with Blomkvist's help can Salander avoid the fate they have decided for her and expose the secrets they are protecting.

The Girl Who Kicked the Hornets' Nest
Lisbeth Salander has been abused by a system supposedly designed to protect. And yet she is the one person whose intransigence and limitless bloody-mindedness can provoke the disruption of the Swedish secret state.


Summary by Goodreads
~ The Review ~
Book three in the famous Millennium trilogy continues the story around Lisbeth Salander and Mikael Blomkvist with the already well-known virtuos writing style of Stieg Larsson.
Larsson develops an interesting relationship between Lisbeth and Mikael. Although they are not able to communicate face-to-face they find a way to talk to each other with the help of media devices, which play an important role in the whole trilogy.
The Girl Who Kicked the Hornet’s Nest continues the actions of The Girl Who Played with Fire, the second novel in this series, smoothly. It satisfies the reader’s urge for knowledge but stresses his inquisitiveness till the last page is turned.
Where novel one and two in the series only point out single culprits, The Girl Who Kicked the Hornet’s Nest uncovers the corrupt and shocking intrigues of dominant members of society.
As in the first two novels I really enjoyed the little text or teaser that introduces each new chapter. Larsson tells several stories of women resistances or fights against supposedly invincible enemies. These short extracts connect with the plot of the main story and reflect Lisbeth’s personal fight against her enemies in a very vivid and intense way.
The end is rather abrupt and  it didn’t satisfy me completely as it is also the final end to the series. Stieg Larsson was writing the 4th novel in this series when he died in course of a heart attack. Still this series deserves the respect and appreciation of every avid (thriller) reader!
~ We love this book because… ~
1) there should be more stories about strong and active young women
2) sometimes you just have to leave the door to your heart slightly ajar so that a friend can enter
3) arrest doesn’t equal total isolation when your name is Lisbeth Salander
4) of the various point of views Larsson provides
5) there is always a way back
~ The Verdict ~
The Millennium phenomenon shoudln’t be ignored. Read Stieg Larsson’s famous The Girl Who Kicked the Hornet’s Nest if you want to know how the thrilling story around Lisbeth and Mikael ends. It’s a fantastic novel, but unfortunately the last part of the Millennium series!
Posted by Miss Page-Turner at 8:29:00 AM