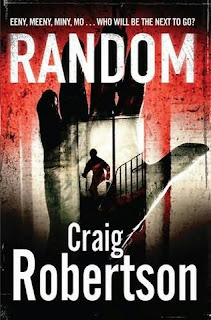 ~ The Author ~
During his 20-year career with the Sunday Post in Glasgow, Craig Robertson has interviewed three recent Prime Ministers; attended major stories including 9/11, Dunblane, the Omagh bombing and the disappearance of Madeleine McCann; been pilloried on breakfast television, beaten Oprah Winfrey to a major scoop, been among the first to interview Susan Boyle, spent time on Death Row in the USA and dispensed polio drops in the backstreets of India.

Author profile by Simon & Schuster UK
~ The Novel ~
Random, published in April 2010 by Simon & Schuster UK is Craig Robertson’s first novel.
Q. How did you come to write Random?
A. I was fascinated by the idea of the perfect, motiveless crime and the problems that presents for those investigating it. I also wanted to toy with people's perceptions of right and wrong. Mostly wrong.
Q&A by Simon & Schuster UK
~ The Story ~
Glasgow is being terrorised by a serial killer the media have nicknamed The Cutter. The murders have left the police baffled. There seems to be neither rhyme nor reason behind the killings; no kind of pattern or motive; an entirely different method of murder each time, and nothing that connects the victims except for the fact that the little fingers of their right hands have been severed. If DS Rachel Narey could only work out the key to the seemingly random murders, how and why the killer selects his victims, she would be well on her way to catching him. But as the police, the press and a threatening figure from Glasgow's underworld begin to close in on The Cutter, his carefully-laid plans threaten to unravel - with horrifying consequences.
Summary by Goodreads
~ The Review ~
This novel is a whole thrilling insight into the obscure mind of a serial killer with no obvious acting pattern. The Cutter appears to be a dangerous psychopath, on the inside he is a smart and hurt man longing for revenge and destruction. Random involves a murderer plot which is interwoven with a kind of underworld plot. In my opinion the involved underworld plot slows the overall story down and blurs it unnecessarily.
The story is told from the murderer’s point of view that puts the reader into a moral conflict. Other novels are written in the POV of a detective, but Craig Robertson wants to show the other side, show the motives of a desperate murderer. Feel sorry for the culprit or the victims? A decision, not as easy as in most thrillers.
Most interesting about Random are the random tactics and techniques the murderer applies to choose his victims. The author presents a very profound theoretical and historical background to the plot. He provides us with an insight into biological and psychical processes of his victims. Several chapters consist of newspaper articles talking about the cruel murders of the Cutter. Form, style and content are authentically written in newspaper style so that the creation of an actual and authentic crime case is supported. Although the overall atmosphere is dark and depressing, the plot is lightened up by a few jokes and irony.
As a little advice: Some of the murders are brutal and many swear words are applied. Random deals with a dark and criminal milieu, so I don’t recommend reading this novel if you are rather squeamish.
I read this novel on train rides and I never got bored. Reading this novel in public, the most unsafe place you could be in Random, was a new experience, always wondering about murderers minds and the always present anxiety of being a possible victim to fate. I find it very shocking that the applied strategies to sort out a random victim really fascinated me and I thought about how they would work in real life, how dangerous someone applying those methods would be for public life and safety.
~ We love this book because… ~
1) of its interesting point of view
2) of the adventurous techniques with that the murderer chooses his victims
3) one single mistake can have a fearful impact on the whole society
4) against its serious plot it still has the courage to interweave jokes
5) the author himself is always present
~ The Verdict ~
The first novel of a journalist with major media knowledge and a great sense for the exciting mind and moral gamesof a killer.
~ Thanks to Simon & Schuster UK for sending me Random by Craig Robertson!
Posted by Miss Page-Turner at 3:56:00 PM