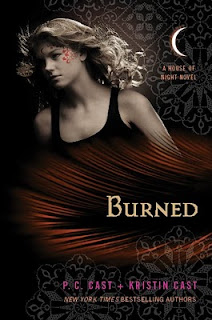 ~ The Authors ~
P.C. Cast was born in Watseka, Illinois, and grew up being shuttled back-and-forth between Illinois and Oklahoma, which is where she fell in love with Quarter Horses and mythology (at about the same time). After high school she joined the United States Air Force and began public speaking and writing. Since her tour in the USAF, she has been speaking and teaching professionally. P.C. Cast is an experienced teacher and talented speaker and a New York Times Best Selling author. She lives in Oklahoma with her fabulous daughter, her spoiled cat, and her adorable Scotties!
Author profile by Goodreads


At 19-years-old, Kristin is thrilled to be co-authoring the YA series, THE HOUSE OF NIGHT, with her mother. The first book in the series will be her first published novel. She has won awards for her poetry, as well as served as journalist for her intermediate high school newspaper, Tiger Tales, and as editor for her high school magazine, Tiger Eye. Kristin attends Northeastern State University in Tahlequah, Oklahoma, and is working hard to fulfill her goal of becoming a veterinarian without bankrupting her mother. One of the Scottinators belong to her, although we’re not telling either of the dogs that she’s going to someday be their veterinarian. Kristin would love to hear from her fans, and can also be reached through her mother’s website.
Author profile by Goodreads
For further information check out http://www.pccast.net/
~ The Novel ~
Burned is the 7th instalment in the House of Night series written by P.C. and Kristin Cast, it was first published in 2010.
Marked, the first novel, was published in 2007 by St. Martin's Griffin. It was followed by Betrayed (2007), Chosen (2008), Untamed (2009), Hunted (2009), Tempted (2009), Burned and Awakened (2010). Destined, the 9th instalment, will be released in November 2011. The House of Night series is planned to include twelve books.
For further information check out http://www.houseofnightseries.com/
~ The Story ~
Zoey Redbird is the youngest High Priestess in House of Night history and is the only person – vamp or fledgling – that can stop the evil Neferet from raising all kinds of immortal trouble. And she might just have a chance if she wasn’t so busy being dead.

Well, dead is too strong a word. Stevie Rae knows she can bring her BFF back from her unscheduled va-cay in the Otherworld. But it’s going to take a lot more than hoping to bring Zoey back. Stevie Rae will have to give up a few secrets of her own . . .
Summary by Goodreads
To read an excerpt of Burned, click here!
~ The Review ~
Zoey and her omnipresent struggle between different men and love interests came to an end when Heath died in the last part and saved me from starting to hate her for her naïve and mindless behaviour. Now that her soul is scattered, Zoey only gets to tell the subplot.
As we lost our heroine Zoey, the main plot is told from many different POVs, like Aphrodite’s, Stark’s or Heath’s which is a very welcomed change.
This novel is structured like a quest with the purpose to save Z’s scattered soul from being lost forever. Stark is on a mission and we are with him, totally swooning for our brave and fearless warrior.
Another plot point circles around Stevie Rae making friends with a creature of darkness. I know that they shouldn’t be together or not even friends, but a forbidden romance makes the series more interesting and gives it a new exciting touch.
Furthermore a new setting is introduced, the Isle of Skye, a Scottish realm of magic and ancient power. The Queen Sciach introduces another kind of vampyr to us, who only know the modern world. Stark has to travel a long way of pain and bearings to become one of them.
All main characters have to go through a major change and are confronted with their worst fears. Zoey (finally) needs to let Heath go, Stark has to fight the dark powers within him and Stevie Rae her growing feelings for an evil and forbidden creature.
~ We love this book because… ~
1) we want to be called a queen by our very own warrior
2) of the (un)dead and the beast
3) Scottish accent can be so sexy
4) sometimes you just need to move on to get the chance for a new start
5) some bonds aren't meant to be broken
~ The Verdict ~
The average writing style doesn’t weaken my first impression of Burned. I just loved the quest character of it. We’ve got action, a lot of tears and fears and of course a highly romantic love story. Burned will leave you on fire!
Posted by Miss Page-Turner at 2:24:00 PM