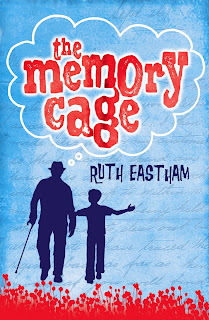 ~ The Author ~
Ruth Eastham was born near Preston in Lancashire, England. Since then she has lived in York, Hull, Penrith, Palmerston North (New Zealand), Cambridge, Brisbane (Australia), Nottingham and Duino (Italy) and thinks she’s got a little bit of all these places in her!
Author profile by http://rutheastham.com/about.html
For further information visit http://rutheastham.com
~ The Novel ~
The Memory Cage, published in January 2011, is the debut novel of author Ruth Eastham.
~ The Story ~
Alex's Grandfather keeps forgetting things. Desperate to help him remember, Alex starts collecting old photographs. Bust as Alex digs into his grandfather's past, he stumbles across secrets that have been buried since World War II. Uncovering the truth could save Grandad ... but it might also tear Alex apart.
Summary by Goodreads
Interested? Read the first chapter here!
~ The Review ~
The Memory Cage  is a story about a granddad who fears loosing his memories over an illness and his grandson who cannot forget his past, although it’s the only thing he wishes for.
This novel is told from Alex’ point of view, an ordinary teenager from the outside, that appears to be a troubled child on the inside. Being subject to terrifying memories of his past and psychical games in the present, he still appears very mature and like a grown- up, especially when it comes to protecting his grandad. Alex is very sensitive, caring and responsible always trying to help him.
I do not read many Middle Grade novels, because I always tend miss a connection to the main protagonist, that is much younger than I am, but Alex made me immediately like him. He’s the underdog and I care for him.
Alex and his grandfather share a very intimate relationship.  And when his parents want to put grandpa in an old peoples’ home because his Alzheimer’s is getting worse each day, Alex is determined to find a way to scatter their plans and bring back his grandfather’s memory not knowing what hidden secrets he might come across.
On their journey, willing or unwilling, to the past Alex and his grandfather ,William Smith have their funny and sad moments. Their relationship warms my heart, because it never appears constructed, but always very realistic. Grandad has his secrets and just as Alex I couldn’t wait to reveal them.
I hadn’t imagined William’s Alzheimer’s to be too hard to read about, as I haven’t come in contact with such an illness before, but at some point when he keeps forgetting major things and even big parts of his daily life I became extremely sad, unterstanding the terrible impact of such an illness.
Alzheimer’s is presented in an informative way, giving for MG appropriate and understandable basic information about the illness.
In addition it also addresses the topic of war, making it accessible with a certain example, discussions and conflict potential within the Smith family.
This novel is such a precious debut because it deals with most important and high sensitive topics that must affect one. The Memory Cage encourages young teens to think about what’s important in life, to be an active part in political debates and generational exchanges.
~ We love this book because… ~
1) one single photo can change everything
2) of cocodriles and transhlers
3) it addresses important  topics with social relevance like Alzheimer’s and war
4) librarians are powerful memory keepers
5) the flood might wash away every single letter of your writing in the sand, but it doesn’t take away its truth and persistence
~ The Verdict ~
I thoroughly enjoyed reading The Memory Cage, it made me smile and frown, hope and fear and on some pages I couldn’t stop the tears from rolling down my face.
This novel has feeling and personality and is not only a recommendable read for Middle Grade students, but for all age groups.
~ Thanks to Ruth Eastham and Scholastic UK for sending me a copy of The Memory Cage!

~ Watch out for an interview with Ruth Eastham + Giveaway :)
Posted by Miss Page-Turner at 7:36:00 AM