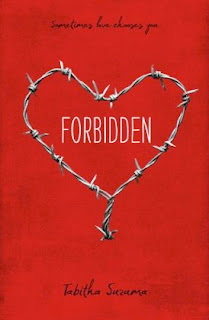 Title: Forbidden
Author: Tabitha Suzuma
Publisher: Simon Pulse
Publishing Date: June 28th 2011
Length: 464 pages
Genre: YA, romance, familydrama
Source: Simon & Schuster Galley Grab
She is pretty and talented - sweet sixteen and never been kissed. He is seventeen; gorgeous and on the brink of a bright future. And now they have fallen in love. But ...They are brother and sister.
Summary by Goodreads

people might label a book about incest, a book like FORBIDDEN. I would have done the same, if I hadn't read it myself. I expected the worst and got the best and heartfelt book I could imagine when thinking of books that deal with taboo topics like incest. This book IS shocking, but in an intense and good way.


Being different...
In FORBIDDEN we meet the Whitley family, consiting of the children Lochan, Maya, Kit, Tiffin and Willa. Lochan is the troubled, but brilliant big brother, Maya, the brave and strong older sister.  Abandoned by their mother they care for their siblings Kit, gang member, always angry and aggressive, Tiffin, the hyperactive and Willa, the youngest and most in need of care and affection. Every single character highly contributes to this novel's uniqueness.


What shouldn't be said: "I love you"
When I first read the summary of FORBIDDEN I imagined the two protagonists wouldn't know each other. I thought of their first meeting, them falling in love only to discover that they are brother and sister. I was shocked when I realised that they knew about being brother and sister when they fell in love!

But their love is so not about being rebellious or provocative, it's all about the circumstances their love develops in. They both care for three siblings and a constantly drunk mother (I could strangle that woman! A monther abandoning their family made me sad and so angry.How can a mother be that careless about her beautiful children?) so they are kind of forced into threir role as parents- mother and father, husband and wife- lovers. Maya and Lochan give each other the feelings of affection und support that are constantly missing in their lives.


Something wrong feels so right...
I am always a fan of love stories and reading romantic and steamy scenes. But I shouldn't be a fan of brother and sister falling in love, right? They are supposed to stay away from each other and I couldn't help but hope for them to get together, for their love to have a chance, a future. The whole time I knew I shouldn't cheer on their love, I shouldn't want them to touch, kiss or be together, but I DID.

If you decide to read FORBIDDEN you have to expect many love and sexual interactions. Suzuma gives us a lot of delicate details without degrading their love or turning their feelings into something disgusting or dirty. Their feelings are natural and therefore they deserve to be written about in detail. Again I craved for more, although I shouldn't!

The dual point of view, alternating between Lochan and Maya is the best Suzuma could have applied to tell their love story. Their voices are so unique and touching, fitting perfectly together to tell one of the most tragic love stories of all time.

This story is supported by a rich, complex and vivid language that adjusts to each situation like a chameleon, always highlighting each scene's highest potential. Suzuma has a talent for catching a mood and describing an atmosphere. Her language and writing is the rope that's tying you to the swaying boat of FORBIDDEN's story during a storm of emotions and impressions.

Tabitha Suzuma shows there's much more behind a term like incest, such labels created by society. There are humans, individuals with feelings like love, passion, shame and fear.

What I consider brave is that Suzuma also included a part of herself, of her past in the story of FORBIDDEN and so made it an even more personal and touching read.  In an interview with Absolute Vanilla Suzuma tells us that Lochan and Maya's abusive and destructive mother was “in part [influenced] by [her] late father, who was physically absusive towards [her] when [she] was a child and rarely showed affection.“


A constant named fear...
Fear is a constant in FORBIDDEN, the individual fear of social interaction, the shared of being discovered and the overall fear of being rejected as social outcast.

The fear of interacting with or meeting new people has always been a part of Lochan. But as much his life is ruled by the fear of being confronted by society, I see that he makes a confronting move  himself.  By starting the illegal relationship with his sister he only increases the potential of being involved in social conflicts. So his love with Maya might be his only way to get in contact with society. And the character that appeared so troubled and afraid might be stronger than anybody thought.

Beside the incestuous relationship between Lochan and Maya, we have to face other domestic problems and conflicts. Be prepared for various social and individual issues since this novel is highly about the difficulties of being a part of a family or society.
„These violent delights have violent ends.“ ~Shakespeare
Now that I finished FORBIDDEN( after two sleepless nights, crowded with thoughts) I will miss the characters so much. I know that words are not enough to desccribe what deep impact FORBIDDEN had on me and my feelings towards certain topics and opinions. Tabitha Suzuma made me realise that nobody should be judged by their feelings.

I couldn't stand the end, it killed me and made me sob badly. I cried a lot in the end, because this novel touched me so deeply it made my heart ache and left my thoughts constantly spiraling around this utterly sad love story. It's a tragedy! FORBIDDEN twisted my insides, wrenched them out only to dry my steady flowing tears with them! I never thought I'd like a story about incest, a taboo topic, that much. And I am in love with it, although I shouldn't!

Of course I can understand that some readers don't want to read a story about incest, but I think it's really important to take the FORBIDDEN adventure and learn that feelings do not always equal society's expectations and that there is more than labels like right or wrong to loving a person. I highly encourage everyone to give Tabitha Suzuma's fantastic work a chance!

5/5 ***** FORBIDDEN- A story so real, cruel and heartfelt and all about being absolute it hurts. I have never read a novel that touched me and that left me so shattered and shaken like FORBIDDEN !
One of the best books I've read so far! The setting, shockingly realistic characters and the glue-like atmosphere held me in a tight grip and didn't release me till the last page was turned.  I never expected to be that touched. FORBIDDEN might not be an easy novel, but it should definitely find a reader in you!

* You can read an excerpt of FORBIDDEN here!

*Watch a (fan-made I think) book trailer of FORBIDDEN here!

* Make sure to visit www.tabithasuzuma.com

* Thanks to the Simon & Schuster Galley Grab programme for offering FORBIDDEN for review!
Posted by Miss Page-Turner at 3:44:00 PM